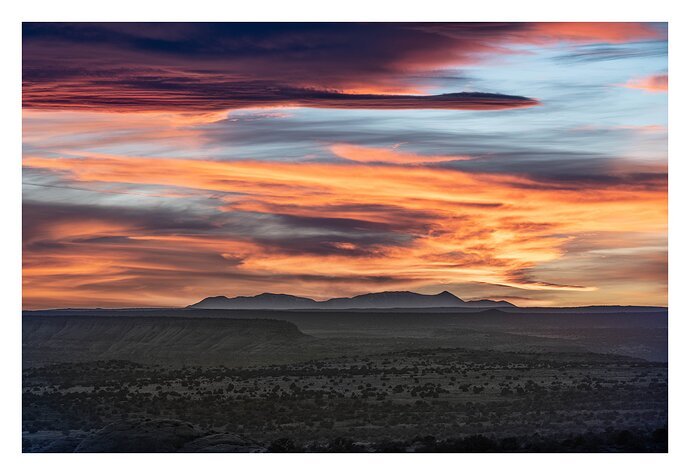 Somewhere I read to always look behind you when planning an image…you never know. I was fortunate to have this amazing sunset while actually shooting some pinnacles 180 degrees from this shot. Just at the peak of the best light to shoot the pinnacles I turned around to this image. Probably my last image in this Moab series.

I find it very hard to critique an image like this because when you push it as far as you have it really does become a matter of personal taste. You’ve entered into the realm of abstract . I love your treatment of the foreground right to to the base of the mountains. You’ve brought up the detail nicely but kept everything in muted shadow. My preference would be to bring down whatever is going on at the base of the mountains - is it mist? - it feels too much like an artifact but toning it down might render it very effective. I would also do something about the haloing. When you push the contrast etc. as you have in this picture, haloing often becomes problematic. It is very noticeable along the horizon to the left of the mountains but extends right across their tops and to the right as well. That can be easily remedied by using the clone tool in Ps - create a new layer, click on clone tool and set the layer (not the tool per se) to “darker color” and then paint in using the sky just above the haloing. Easy peasy. As to the sky itself, again, personal taste. As a mentor of mine, the late, great furniture craftsman and designer James Krenov always used to say, “Just because it isn’t my cup of tea doesn’t mean it isn’t good tea”. That being said, I’d love to see a version of this with the sky toned down in terms of colour and contrast. Personally I love the composition and don’t feel it needs to be pushed so hard. But that’s me.

“Just because it isn’t my cup of tea doesn’t mean it isn’t good tea”.

I love that! I’m tucking that into my memory for the future. (Although, I’d probably go even farther with “Just because it isn’t my cup of coffee doesn’t mean it isn’t good tea.”

I agree with Kerry on reducing the haloing and the mountain mist. However, for me Kerry’s comments beg the question: How hard did you push this?

I have no idea what you started with, but I have seen some insane sunsets with challenging contrast. Is it best to reduce contrast to avoid abstract, even when the contrast was as recorded? It’s an interesting question to me. (I once posted a black and white image of sea stacks that had a soaring gull filling the empty space adjoining the stacks. A good forum-friend on another website commented that he wasn’t sure about the addition of the bird. That stumped me, because I hadn’t added the bird; it was in the original. It made me wonder if I should have cloned it out so that the image looked more natural?)

My cup of tea (coffee) is just fine with the sky. I do like the subtle touch of the foreground deep in shadow but yet with visible detail. I prefer images with subtle shadows without a white frame, but that’s a whole other “cup of tea” argument.

It would also be interesting to look at the processing and see what caused the haloing. I see that show up in my images with masking (for example, separating the sky from the land), Shadow/Highlight adjustments, HIRALOAM sharpening, and Unsharp Mask sharpening. (There are probably others I’m not remembering right now too.) Often, it’s a combination of a couple things. Regardless, as Kerry notes there should be several easy fixes.

I like the sky fine as is. I have seen sunsets here in Baja that rival these in color intensity. The shadowed foreground takes up a lot of space yet the details don’t register that well. I would give more definition with contrast or levels or curves. If possible.

Mario, I think in a vacuum that the sky looks realistic for what I have seen from desert sunsets. I think the thing that I find to be slightly an issue is that the darkest tones in the sky are darker than the darkest tones in the land, I think the contrast is slightly out of balance between land and sky, and not that either land or sky looks un-natural as a standalone component. But put them together and something does seem slightly off to me, in real life land darks are usually darker than sky darks. If you are happy with how the foreground looks, I could see doing something directionally with reducing contrast in the sky. This may be part of the direction that @Kerry_Gordon was driving at, I’m not sur.

Mario, this is an excellent view, with the sweeping land, distant mountain range and outstanding sky. The strong halo along the horizon and the “mist” at the bottom of the mountains are artifacts that show up from pushing the clarity slider too hard (if you’re using Adobe software). That effect is also known as microcontrast, which is using unsharp mask with a small amount and large radius (again you can reduce the effect by lowering both the amount and the radius).

wonderful capture Mario. As has already been mentioned, the halo is really eye grabbing and if you can tone that down across the entire horizon of the image, you have a very nice image. This is wonderfully simplistic which makes this so inviting. The background mountain is nicely centered and the low buttes in the foreground add some interest but this image is ALL about the sky. I think the sky could be softened while keeping the same colors and making it less edgy but I can also see leaving it alone. It all depends on how you saw this scene and how you want to remember it. This must have been beautiful to witness Mario.
Other than the halo, you might consider removing the contrail in the sky, center left. Not a huge deal but noticeable when blown up large. 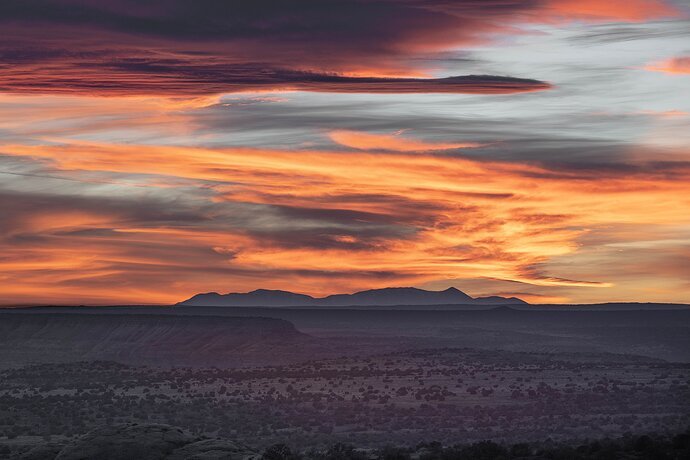 Thank you all @Mark_Seaver @John_Williams @David_Haynes @Kerry_Gordon @Igor_Doncov @Ed_McGuirk for you extensive comments and suggestions. I incorporated many. I cut down clarity over entire image but that did not help the halo. I eventually started from scratch but added a very thin radial filter to the left horizon as this was the only way I could eliminate it given my skill level. Also reduced contrast and increased sharpness in the sky. I toned down the mist. I do think that is actually a mist. Thoughts?

A couple of suggestions:

Like the sky much better in this new version but much prefer how you handled the land in the first version.

@Igor_Doncov @Kerry_Gordon I agree with both of you. The land also had a slight magenta tint which I addressed. 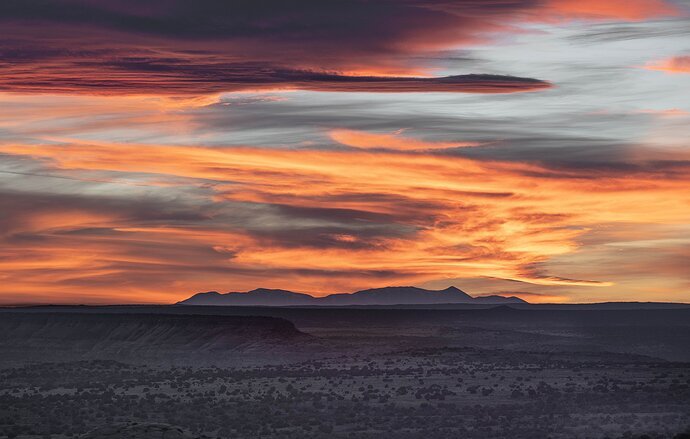