With leaf darkened a bit - 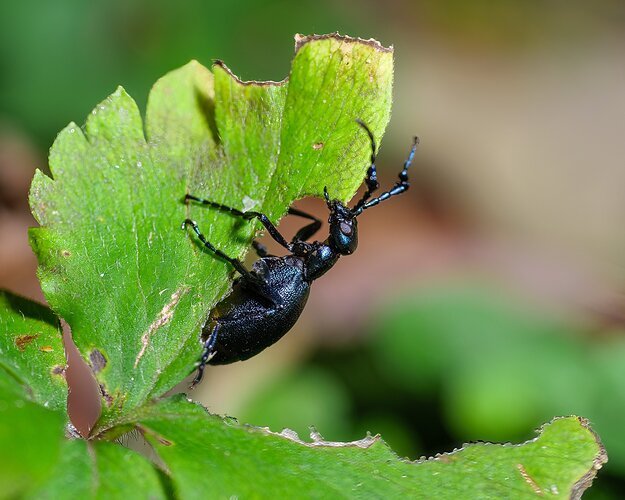 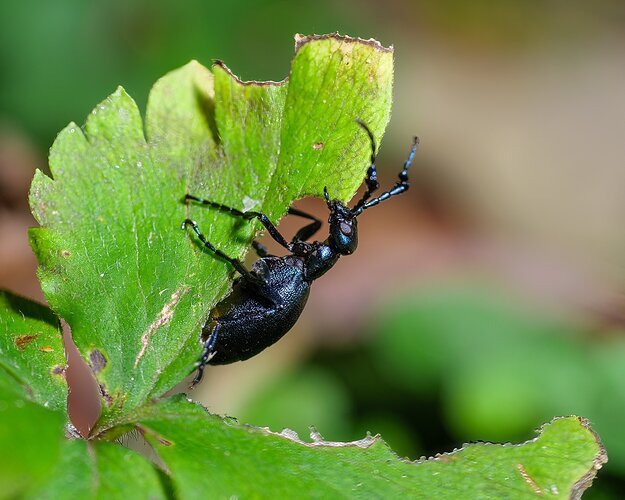 On my way back from sitting on the dock, I stopped to look at some Indian pipe coming up on the side of the yard. That’s when I noticed this beetle having breakfast. It’s only the 3rd time I’ve photographed one, and the only time I’ve caught one eating. They have the most amazing blue metallic coloring.

Meloe americanus is a type of blister beetle and while they can fly, they don’t do it often. Mostly they walk and feed on the ground - this one is in my backyard and is about 2 cm long - the smallest one I’ve seen so far. It was happily eating what I think is a raspberry leaf. Seems like it’s a favorite. The tiny speck of orange on its shoulder is the oil they are known for producing (cantharidin is the chemical name). When threatened or handled roughly they make much more and it can burn and make blisters. But they’re quite gentle and peaceable. Females hitch rides on bees back to their nests where they will lay their eggs and feed on the nectar the bees make for their own larvae. Little freeloaders!

Flash too obvious? Not enough DOF?

I had the lens stopped down for some shots, but the background was too much so I opened up and turned the flash down to 1/16th power. It is off camera to the right on the ground. Without the flash it was much too dim to use a high enough shutter speed to freeze the action since it kept eating the whole time!

Camera on beanbag on the ground 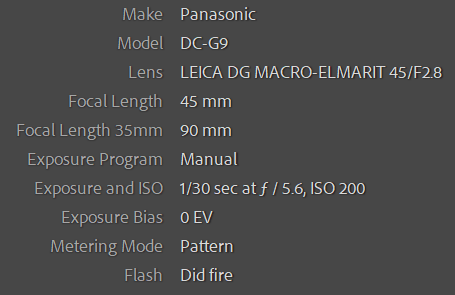 Lr for initial processing and a bit of a crop. Upped the shadows and whites, lowered the blacks and highlights. Added some texture and clarity and used masking to darken the background and to up the shadows on the beetle itself. Basically created a subject mask and inverted it. Topaz Sharpen AI to bring up some detail. Photoshop to use color and luminosity masking to tame the greens and the background a little more.

Good work and good narrative, Kris. Interesting to see this guy munching that leaf. I think the dof looks okay, with good details in the beetle. Maybe tone down the top middle of that leaf he’s on? It seems to catch my eye. Well done.

Fascinating information and background on this little beetle, Kris. At 2 cm long, I don’t think I would have even seen it! The soft background does help to highlight the beetle and being caught nibbling on the leaf adds to the story very nicely.

Good eye, Kris to see this tiny little guy having breakfast. He seems to have some reflectiveness in his metallic coloring, which is catch the flash a bit, but not much you can do about it. I think you managed the lighting very well. Wonderful details. I love how he is framed in the two partial leaves, with the opening providing a nice soft BG. Great shot.

Thanks @terryb, @linda_mellor & @Shirley_Freeman - it is a cool little critter. Saw it later in the day when I went back to shoot the Indian Pipe and it was still working on this leaf. Hungry!

Yeah, Terry, I should bring the bright bit on the leaf down more. Will do that tomorrow and repost. Thanks for noticing that when I didn’t.

Cool find and capture! Processing and flash look completely natural. A little more DOF would be nice, but would maybe come at a cost somewhere else.

Did this thing eat as much of the leaf as it looks like?? Amazing!

Thanks @Diane_Miller - it ate a ton of leaf that day. Growing bug, I suppose. I should maybe have experimented with flash power and aperture, but it was moving pretty quickly and then wasn’t posing as well so I didn’t.