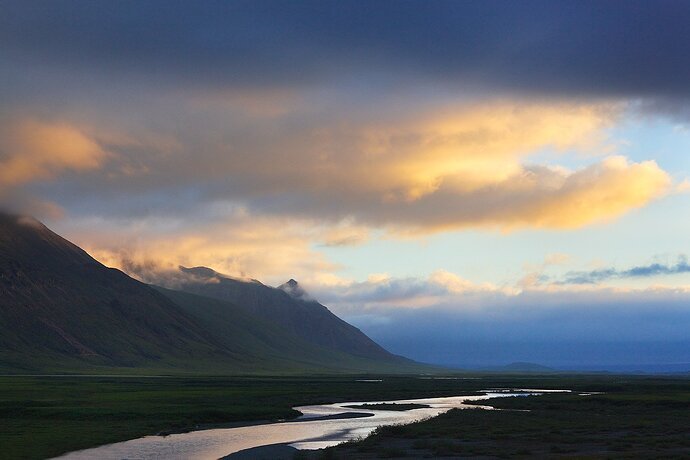 On an early morning, under low clouds illuminated by the rising sun, the Atigun River in Alaska’s North Slope flows north from Atigun Pass in the Brooks Range through the Atigun Gorge to converge with the Sagavanirktok River. The Dalton Highway and Trans-Alaskan Pipeline follow its course.

Love that part of Alaska. After you get your fill of the Seward Peninsula you move north and that’s the best part of the state accessable by road. This is just a tad upstream from your photo. It was taken from the pass. Igor—Lovely view. I could not have made that shot due to the low ceiling when I went over the pass. Yes, I agree. I spent a few days up there including joining some work crew members in their dining hall. They have a lot of insight and I was happy to listen to them. I have many more images from along the Dalton, a couple I have already posted, and others which I will post later.

I have many more images from along the Dalton, a couple I have already posted, and others which I will post later

I’m looking forward to them. If I can’t b there at least I can enjoy it through the images of others.