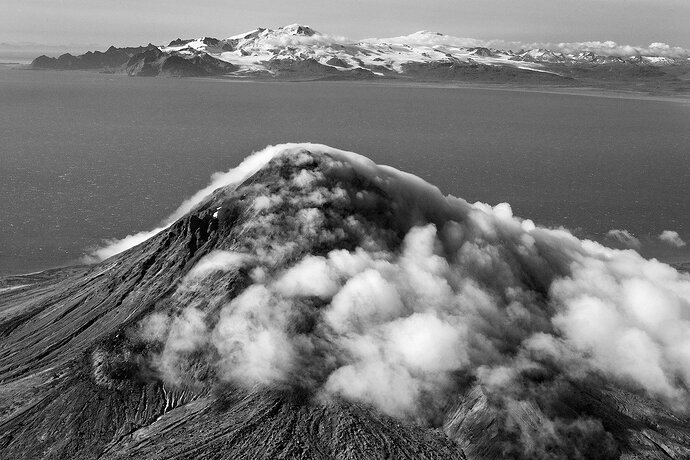 Steam and clouds shroud the top of the volcanic island of Augustine in the Cook Inlet. Across the inlet, Mt. Douglas rises above the Aleutian Range on the Alaskan Peninsula.
Augustine volcano is one of the most active volcanoes in Cook Inlet, having a symmetrical cone rising 1,254 meters above sea level. This volcano has erupted in 1812, 1883, 1935, 1963-64, 1976 and 1986, and surprisingly, the intervals between these eruptions have reduced from 70 to 10 years.

Wow Bob, you portray a lot of weather and volcanic forces at work, but in a quiet manner.
Gotta ask, who is your pilot for this and the tiaga image? In my dreams I will fly with that pilot someday.

Dick—Both images were shot from small fixed-wing, wing-over aircraft (great for shooting out of since there are no wings to interfere with your view) owned and operated by commercial flightseeing companies—Alaska Bear Adventures, Homer, AK; Sheldon Air Service, Talkeetna, AK. The pilots are the owners. Nice folks who won’t fly unless they know you will see what you want to experience, that is, if there are no bears or weather is overcast.