Shot in 2015. There’s a NWR outside Memphis, where the main road is elevated because it bisects a wooded, lake-ish/swampy-ish area. There is almost always standing water on each side of the road. Barred owls nest a little ways back in the woods, and (serendipitously for those in the know) the parents hunt the flooded areas on the sides of the road each summer to feed their young. Their diet consists almost exclusively of crawdads. Once the owlets fledge, they will also fly to the edge of the woods near the road and call for food. The elevated road allows you to get pretty close to eye-level with the owls, and (again, luckily) the owls didn’t mind if you drove slowly and used your car as a blind. I spent hours and hours with them over a few summers. During all that time, this was one of only three occasions that I saw an owl eat a meal in the open. The other 99.9% of the time, they’d catch a crawdad–sometimes within literal feet of you–but they’d always fly back in the woods to eat.

For this shot, I arrived about 20-30 minutes before sunrise and saw a parent on the left side of the road hunting. I then heard an owlet calling on the right side of the road. That was normal, but the owlet eventually flew out onto this open perch in the sun, which was the only time I’d ever seen one land there. The parent then swooped down and grabbed a crawfish and flew over to the owlet and exchanged the food. As you can see, the adult owl was wet from scooping a crawfish out of the water. It seemed happy to sit in the sun for a while, presumably to dry its feathers. The owlet made quick work of the crawfish. I wasn’t really prepared for all this because the owls almost always stayed on the shaded side of the road. So, my exposure was set for a low-light shot. When the owlet started calling excitedly, I thought perhaps that the parent would fly over to the sunny side of the road. I quickly removed my teleconverter and stopped my aperture down in anticipation. The result is that the owls are both in focus, but I have some hot whites on the owlet from my ISO being too high. Although this was shot in aperture priority, back then, Nikon cameras needed to have some negative exposure compensation set for bright-ish scenes. Sorry for the novella–fun to think back on that morning.

In post, I cropped a bit, worked on the whites as best I could, sharpened the birds, and used a slight vignette. All C&C welcome. 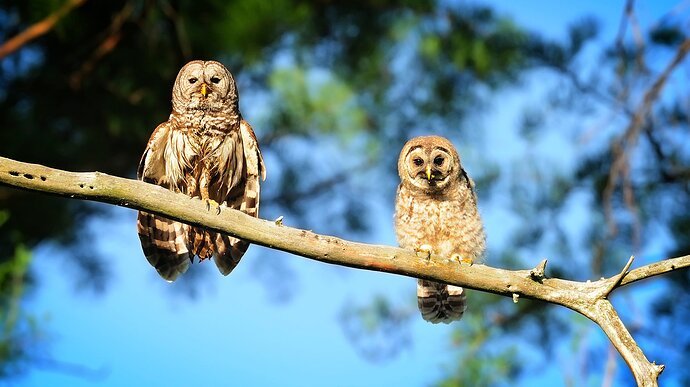 A nice look at parent and offspring and both are in focus-well done. For my taste, I’d probably desaturate and darken the sky; the brightness of the background seems to compete with the owlet and I think more contrast there might be better.

Great stuff. Thanks for the back ground story. You captured a nice memory.
I like Allen’s suggestion of lowering the saturation and luminescence of the sky. Nice to see both owls in focus and nice eye contact with both. The whites don’t seem blown out but you may want to lower
the whites/brights which would also help lower the brightness of the perch.

Hi Lyle, Love the eye contact from the owls and the feeding behavior is terrific. Great that you could get both sharp. I’m wondering if lessening brightness of the perch would improve the image. I am also wondering about lessening the whites you worked on (assuming you made them brighter) - not as bright may be more realistic than bright white since I imagine this was taken early in the morning.

Good story here. As others have mentioned, a few minor tweaks could really improve this image. I’m in agreement with all the comments. A great opportunity when these owls are out in the open like this. The only thing I would suggest is use a light hand when adjusting the exposure. I think you can do this without making it look overprocessed.

Thanks, all. Not as simple as adjusting the exposure, I’m afraid. Some whites are blown, so lowering the exposure just results in muddying them, not adding detail. It’s surprising how much less headroom the D3s files have than D850 files in regard to recovering highlights, even for shots at ISO 1600. It’s funny you mention lowering the exposure on the perch, Allen. I’ve already burned it a good amount. I could burn the background and perch more. I also have frames where the bird’s feathers aren’t blown. I could just clone in some from those. Good comments, all. Appreciated.