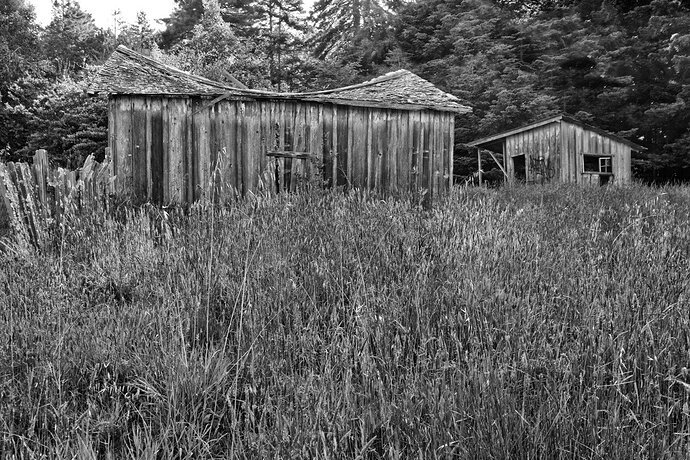 Excessive load deflections lead to a structure becoming less able to carry applied loads, often leading to buckling. The length of a beam between supports (span), relative to the height of the beam, determines the beam’s capability to resist vertical load deflection. The central ridge beam of the larger structure appears to have been incapable of carrying the load on it’s gable roof, whereas the roof of the smaller structure, with a shorter span, has borne the load.

Bob, I’ve been missing your structure shots. This is wonderful and I appreciate the story behind it. Thank you.

Thank you David. I have backed-off on my postings a bit because it appears that one could get the feeling that this is my personal website. I don’t want to inadvertently confuse any of the other contributors.

I understand, Bob. There’s not a lot of traffic in the Non-Nature categories and Showcase is the lightest of all. I think people have a challenging time thinking of something to say about an image and keep it from being a critique. So most people don’t say much of anything. I can appreciate that.

I like them too and will try to post more here too. I have plenty of stuff that isn’t nature.

Actually I meant in NN Critique since I think critique gets a lot more action than Showcase. While I like that we have a category that isn’t asking for advice/criticism, I often don’t know what to say or what the poster is looking for so I don’t often comment even though I may look.

Thank you David and Ms. Smith. My principle reason for posting on NPN, and only in the Showcase categories, is because I often go where I do not believe many others have had an opportunity to visit with the idea of broadening their horizons. I always appreciate your observations. I know that art is in the eye of the beholder and my ego doesn’t require coddling. If I only wanted “attaboy” comments I would post on some other venue. No Thanks! I am not qualified to criticize anyone else’s images so I rarely view the Critiques sections and never criticize any image. I leave that responsibility to the recognized professionals.

Bob you could chime in anytime. I’m not a professional and neither are most of the folks here who do offer advice. I think your images demonstrate an excellent grasp of what makes a good photo and I know I’m not alone in that opinion. Please don’t feel like there is some exam to pass.

Ms. Smith:
In a previous life I was recognized as a “Subject Matter Expert” and a “World Class Clinician.” For decades I was hired to point out problems and offer solutions. I found that the individuals who most needed that criticism and advice were the least accepting to it. They were proficient in making the same errors in judgement and action. Their attitude seemed to be “Don’t confuse me with the facts, my mind is made up.” I often asked, after such meetings “Then why did you hire me?” No response, of course, but I always got paid.

Well I’m not going to change your mind, obviously, but it’s sad that you find the atmosphere and attitudes here in critique to be similar. But I always enjoy what you post - you’ve traveled so extensively and I do learn a thing or two from your posts here in Showcase. Keep 'em coming!

Ms. Smith:
Thank you for your comments and support. For years I visited the previous version of NPN and looked specifically at the critiques. I learned a great deal, including whose criticism/advice was appropriate and valid. This new version of NPN is unique by having the Showcase categories. Images can be posted without expectation of criticism. I don’t think anyone is more critical of my work than I am. I only said I don’t participate in the critique sessions. In order to remain anonymous and non-confrontational, I have communicated with David Kingman about some behaviors that I considered inappropriate. He’s the owner. I let him police the site.