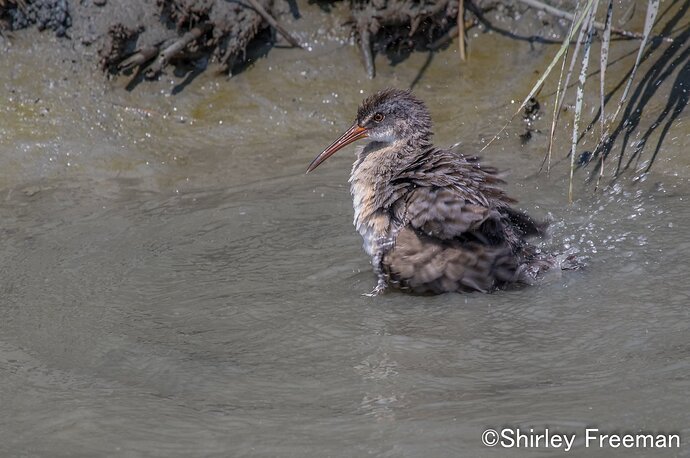 I took this shot at Huntington Beach State Park, Murrells Inlet, SC a few weeks ago. We were on a pier, at low tide, mid afternoon (2:39), so I had harsh light to contend with, but low tide, causing the birds be out to fish, and in this case, bath in muddy water. I like that the part (top half) of him is sharp, and that part that he was moving the most was showing motion. Thanks for viewing and any comments. I am learning here on this site!

I used a polerizing filter to help with the harsh light, do you think that helped?

I don’t like that he was close to a busy (and not good looking) background, and I was pretty close to the bird and background, so not sure if you have any suggestions on what to do. I already tried to decrease contrast, sharpness, etc. in the bank behind him.

Hi Shirley
This new format is going to some time so get used to. I think the polerizing filter helped bring out Rails details. The only this I would do with this photo is crop some the bottom of the frame out. I this the Rail is a little high in the frame.
Peter

Thank you, Peter. Yes, I was trying to get rid of some of the ugly background, so I cropped some of it out, letting the muddy water on the bottom stay. So do you think cropping (I have plenty of pixels) it in smaller to keep the subject in the rule of thirds (or there abouts) would work best? Maybe make the image more of a pano?

Congrats on getting this uncommon rail in action, Shirley. The placement of the rail in the frame looks good. but you can experiment having it a little lower may give a better balance (you mentioned it is not pretty). I agree the light was a little harsh, but there are no shadows on the rail, which alleviates some of the harshness. To me the colors look a little flat - you can try to bump up the saturation to add some pop to the image.

The polarizer definitely helped. The mass of roots above are a takeaway, but in all honesty this is about the only place you can find a Rail in the open. The action of the Rail bathing was where it decided to bathe; it wasn’t going to move unless to get out from the open. I’m glad you caught this action. A keeper!

I like the detail in the rail, Shirley, and I suspect the polarizer helped. I haven’t used one in a long time and then just for scenics, so I’m certainly not an expert. Given the “ugly” background, you might consider cropping this rather tightly. With that pose I think you could get away with it. I also like Phil’s suggestion of adding a bit of pop to the bird. 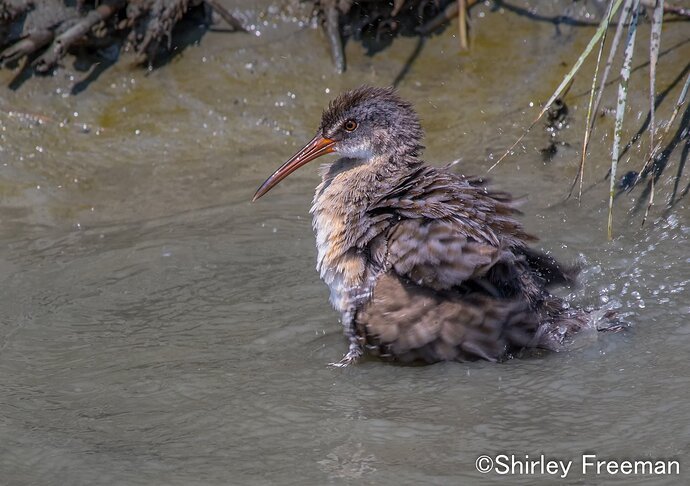 Thank you, Peter, Govind, Phil and Dennis for your wonderful feedback. I am uploading an image with the changes that you provided. I think it helps. What do you think?

I like the repost, Shirley. The background became much less of an issue.

Looks much better, Shirley. The rail is more prominent in the frame and its colors stand out well.

Thank you, Dennis and Govind. Much appreciated.