I have to admit that I really like the Fuji greens I am now able to get. My son, however, finds them to be too unrealistic - “fog should look cool”. What say you, warm or cool?

This was the other noteworthy image from the California coastal redwoods. I was in thick fog intently looking for compositions when I focused closer and saw this virtually at my feet. So no fog but a pleasing image none the less. 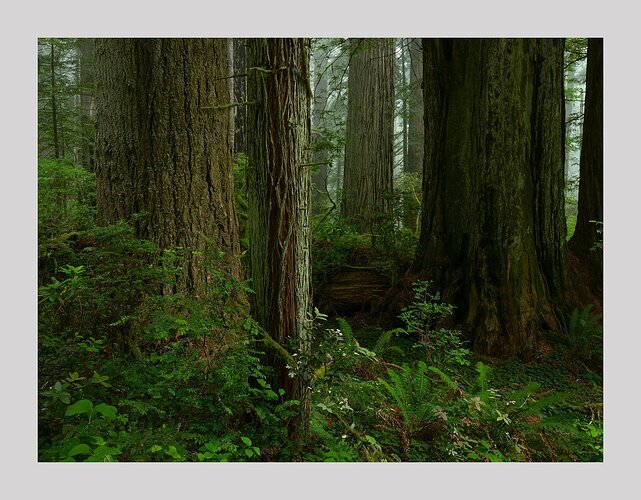 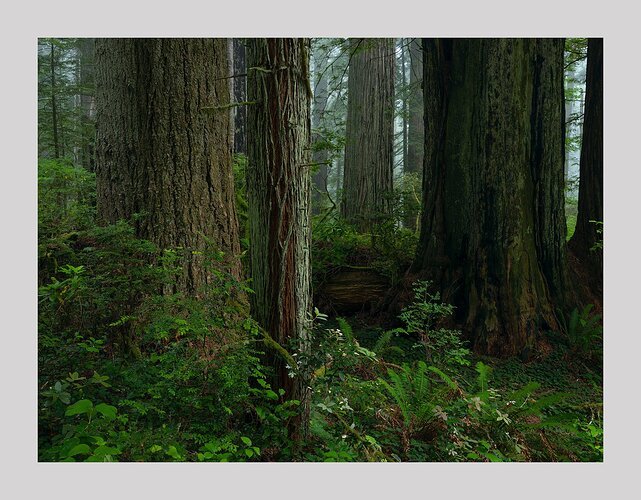 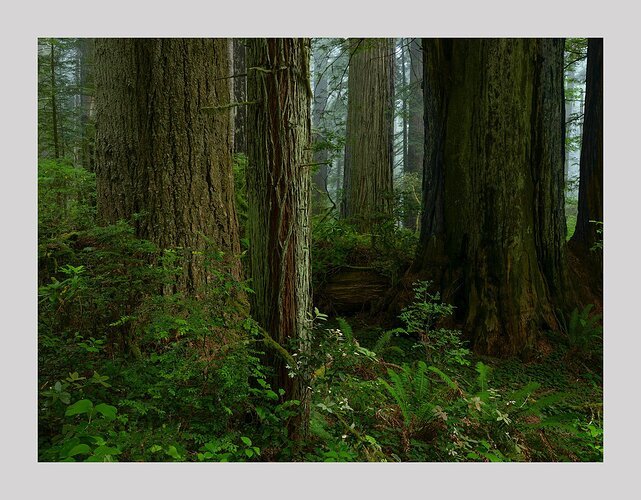 Cool for me, Igor. As the tree trunks are pretty warm, the cooler fog adds depth to the image.

Cool is working for me, Igor. I can’t articulate why, but I just find it more appealing.

Adhika’s right that the coolness of the fog does penetrate a bit deeper. However, the glow is more richly demonstrated in the warmer image.

I’d be tempted to cool the background only, and leave the foreground glow as is…so a blended approach would be my next step.

However, as you well know, the real answer lies within you…

Sounds logical. Let’s see how that comes out.

Igor,for me cool is possible but only for the background and not in the trees. I myself find the first image more pleasing because of the warmer tones.

OK, before I vote, can I assume one of the images is presented, colorwise, just as it came off the sensor, without hue or saturation adjustments?

No, Bill. The a and b channels in LAB curves were adjusted for each image. I didn’t make HSL adjustments.

OK, thanks Igor. After looking at them on both my laptop and desktop, I think I prefer the cooler version over all, except for the tree in the FG on the far left. I like the warmer version of that tree.

The greens in the vegetation and moss/lichen look great, they are not too saturated for my taste. They are rich and vibrant but not over the top. Are you referring to Fuji greens from a Fuji camera, or Fuji Velvia film greens. These greens still have a bit to go before they achieve Velvia status.

Here is another vote for cooling the background fog, but leaving the foreground as presented in the warmer version. The way the trees and vegetation looks in the warm version is just wonderful. The trees look especially appealing in the warmer version. But I’m not a fan of green cast in fog (even if it is sometimes natural in a forest). Here is a rework where I masked in the cooler fog in the bacgkround. This warm/cool color contrast also seems to create better visual separation of the trees from the background as well.

Igor, the cooler version (2nd post) feels more “right” to me. The reduced pop gives it a more intimate and enjoyable feeling. I also like what it does to the bark on that central tree.

Thank you for your inputs. I’ve added all three versions in the post itself for easier comparison.

…o admit that I really like the Fuji greens I am now able to get. My son, however, finds them to be too unrealistic - “fog should look cool”. What say you, warm or cool?This was the other noteworthy image from the California coastal redwoods. I was in thick fog intently looking for compositions when I focused closer and saw this virtually at my feet. So no fog but a pleasing image none the less.Warm:

I like what you did with the warm and cool rendition. Really nice work. I’d perhaps try to lighten up a little bit of the green foliage and highlight on the right side of the trees so there is a little more contrast. This is beautiful as is though.

This one’s easy for me. Cool. It just looks more real to me but other than that I can’t explain why. I just knew it when I saw it. Beautiful shot by the way!

Wow, these versions make you think and relook and think again. Beautful scene: my initial thought was the warm was more inviting. After reading through comments about cooler version and studying the image again, I have to agree- the cooler version does feel more "right’ to me also.

I’m a little late to the party, but my vote would be for the warm and cool version that you posted. As is characteristic of your work you have a strong composition in this image. Nice work!

I do like the green, but it does feel very green. I’d keep the green in the plants (midtones/darks) but maybe neutralize it a bit in the highlights.

Thank you for your thoughts and comments. The warm side wins! Actually it lost but in the end I still favored the first original image. Even though it may not accurately represent reality it’s more interesting than reality. Most of those rhododendron images we see from this area are much warmer than what’s out there so I feel fine with this rendition.

I’m not really that pleased with this image, which I consider to be inferior to the most recent one from Coeur de Lane. This was shot as a focus stack by a medium format camera and I wanted to see how it would look. Both the detail and the colors are impressive. But the image as a whole says very little to me.

This thread was useful in that it broke down the tone effects into the three categories: the green leaves, the tree trunks, and the fog/sky. All three of the first posted images have greens that are green, that is, not yellow green as can happen with too much warmth. So all three are ok for the greens. I vastly prefer the warmth in the tree trunks that is lacking in the cool version, so the cool version is out for me. I think the balance of the third image is best so that is my vote.