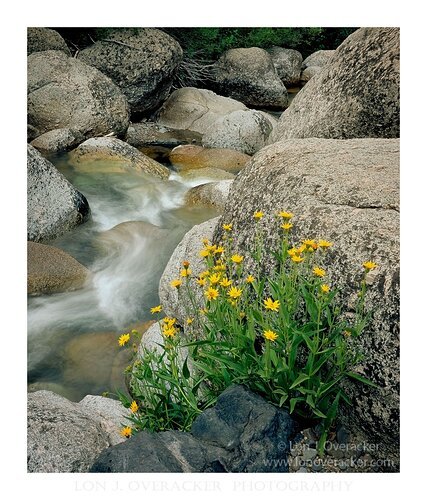 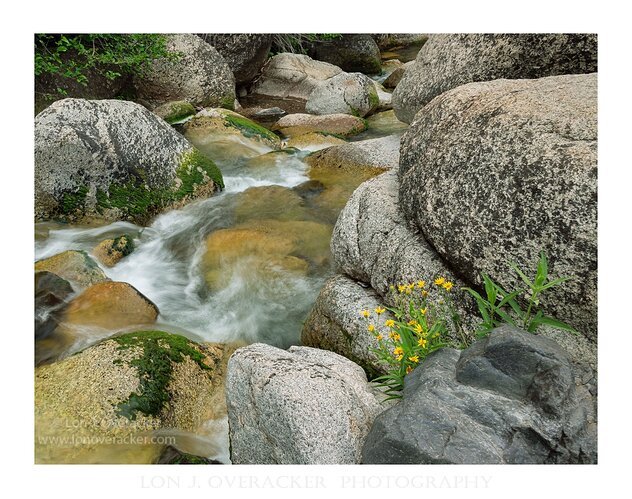 My good friend and long time NPN member Preston Birdwell introduced me to this spot in 2007. I’ve returned here numerous times over the years. During my recent visit I had set up my camp chair at this spot to enjoy some sun and solitude for bit. We all have these spots - locations in nature we cherish…

side note - I was perched in my camp chair just a few feet to the right outside of the frame enjoying the sun, mountain air and silence (of the rushing creek…) I was enjoying the sun, so my t-shirt was draped over the willow… and I went to grab it and heard a “ker-plunk”… hmmmm… some time passed before I realized my cell phone was missing… yup, it took a dive in the drink. Given the nature of a mountain stream… there were a few cascades and terraces my phone could have floated to… So I’m now on my knees in the creek fishing for my phone… Found it! It must have been submerged for at least a minute… and as I pulled it up, I could see the image on my phone - still displayed! I couldn’t believe my phone still worked! At least a minute fully submerged in an ice-cold Sierra stream! It’s a Samsung S7 and still ticking! It’s been over a month now and still no issues - whew!

Feedback and challenge. Not a particularly epic image, but posting to see if anyone can discern the difference in the images that were captured some 15 years apart.

Both have been cropped to some degree so that shouldn’t provide any clue. Which images do you think was captured on film, or digital? And which one was from my original visit in 2007 or recently in 2022?

…Lon, I’m headed out the door here at 0230 for J-tree.
Did you say they were both captured with your waterlogged cellphone?..

OK, here goes. I usually always pick the horizontal over the verticals. Here, I’m going with the vertical as my fav. I’ll also go out on a limb even this early in the morning that the first is the 4x5…

Anyway, without you sharing the GPS coordinates I’ll also say this was the Sonora Pass…

All that moss persuades me the horizontal is from 2022 - if I’m right so far, then it must also be the work of your excellent Korean phone which will last forever. (I never get quiz answers right, by the way!). I prefer the lovely second shot; the first I find a bit cramped in composition, by comparison.

Where ever could this be?

I can’t tell which is DSLR or 4x5. Of the two, I prefer the first composition. The flowers really pop in it and the creek provides a fine backdrop. Good news on the phone surviving the dunk. I think most phones these days are somewhat waterproof, as long as they are not taken to depth or in too long.

No way I can tell from the IQ. More moss could mean the 2nd one is older, from back when we had more rail here. And the Arnica is smaller in the 2nd one – maybe it has grown in the first one. Both are lovely!

My iPhone survived a dip in a lotus pond a few years ago.

Both are lovely Lon but I like the first image slightly better. As far as which one is film , I think the second one is because the color is a little richer.

Looking at the 2 photos I couldn’t tell which is which, but I like the guess @Diane_Miller made. I like both photos. The first image the flowers draw me in and the second image the stones draw me in.

Thanks everyone for playing along! I think because I added the cell phone dunk story, it confused the question on the images… and no, one of those images was from my cell phone. It was between my current DSLR D800E and a 4x5, of which brand I can’t remember, I had a half dozen different 4x5’s. Anyway, here’s the results:

Paul, you are correct the vertical 1st is the 4x5. I’m guessing TOD is time of day? what is TOS? Both were taken probably mid-day under passing clouds… but 15 years difference, I don’t remember.

All that moss persuades me the horizontal is from 2022

Mike, you are correct too! Not sure why moss here in 2022. Probably the lack of snow this year and so longer growing period for the moss.

Thanks @Harley_Goldman . I too prefer the original 4x5, which is the vertical. As they say, it’s not likely one can improve on an original by trying to copy it… I was pretty amazed that the flowering plant still had roots there, which was the main reason I re-shot the scene.

And the Arnica is smaller in the 2nd one – maybe it has grown in the first one. Both are lovely!

Thanks Diane! But you win the consolation prize. The moss was this year and the plant was bigger in 2007! So I think the root ball just hanging on after so many frozen winters… Oh, and thank you for the plant ID! I learned something!

I think the second one is because the color is a little richer.

Thank you Eva. I think think these days it’s difficult to base things on colors - processing to determine film or digital. I do know this was a pretty clean scan, but my originally worked 4x5 scan I got to rework a little with skills and tools that I know I didn’t have 15 years ago…

Thank you Donna! I like your analysis! The flowers in #1 and the stones in #2. Great observation!

Thank you all for chiming in! I have a few others I had fun attempting to replicate older film images, but none are really post worthy…

Lon, the TOS could have also been TOY. Time Of Season or Time Of Year…