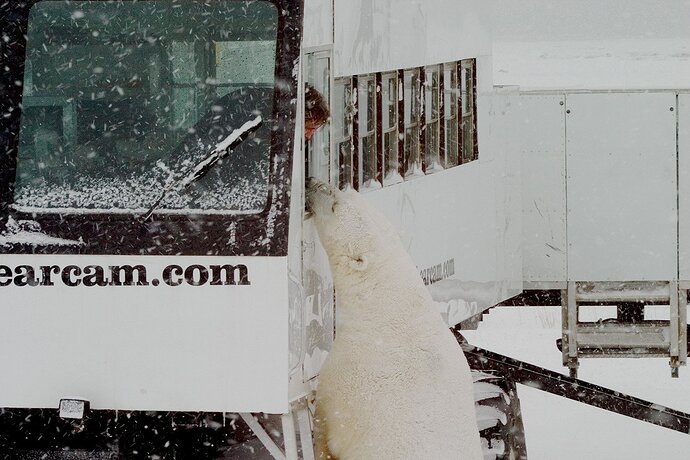 Dancer was a huge male who became very habituated with Dennis Compayre, a Churchill native, who is one of the members of the Polar Bear Web Cam team. The team’s job is to send live images of the bears from this location. Every year they park here and train their video cameras on the bears. Dancer was known to “announce” his arrival by coming over to Dennis’ buggy and rocking it. He then proceeded to camp out immediately in front of it. When the ice froze and it was time to go, he said goodbye by rocking the buggy again. Often he roused himself and went over to the driver side window and seemed to “talk” to Dennis. Remember, the windows on these buggies are 12 feet from the surface of the snow. The year after this iamge was made Dancer failed to return to the Celebration. Dennis looked for signs of him but after two years decided he was not coming back. He has since written a book “Waiting for Dancer.” 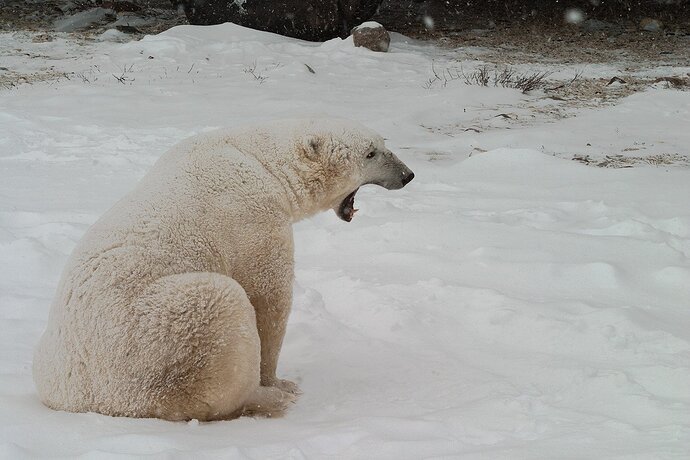 Dancer announcing his arousal, warning the other bears in the celebration to be wary and not challenge his dominance.

Thank you, Ms. Smith. Dennis rescued Dancer as a cub after his mother was lost. Their bond formed and intensified for many years. Dennis was aware of Dancer’s unusually large size and intelligence. He did not encourage habituation to other humans so that his normal fear of man was preserved. It was amazing to witness the two interacting so intimately and fearlessly on this occasion. I was blessed.