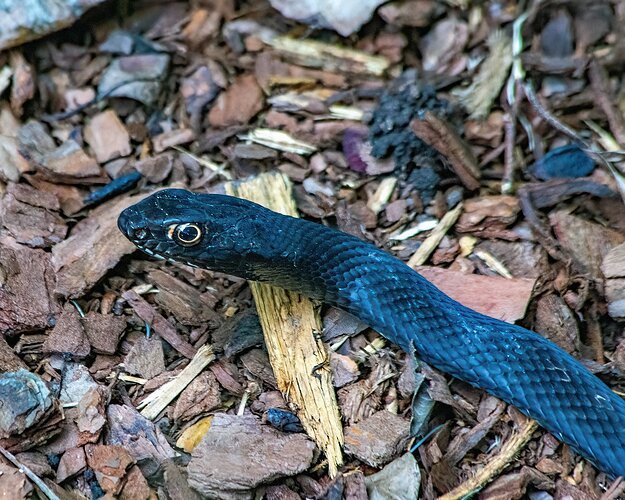 One of the longest snakes in Oklahoma, adults range from 36 - 82 inches (91 - 208 cm). The scales and coloration of the coachwhip’s tail make it look like a braided rope, hence its common name. This is one of the few snakes that is known to be active during the heat of the day. It is one of Oklahoma’s fastest snakes and will seek safety in a tree or a mammal burrow if chased. When cornered, this snake will defend itself by striking and buzzing its tail. It used to be believed that the coachwhip would chase down an adversary and whip him to death with his tail. Of course, this is not true. (oklahomasnakes.org) 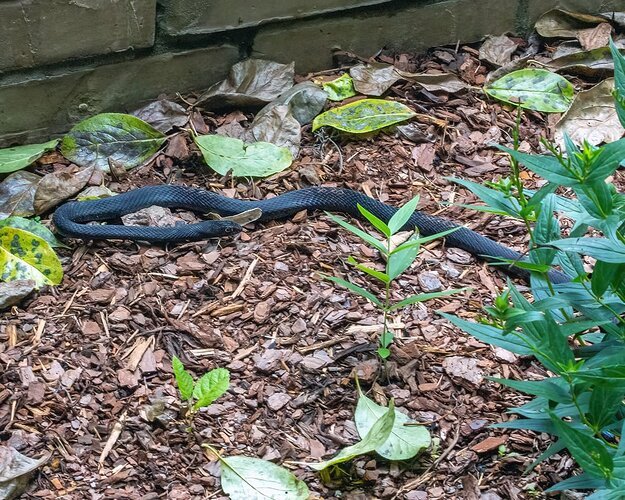 Wow! He let you get so close! It’s so cute how he’s looking at you! Really nice capture!

Thanks! He/she has been hanging around for a couple of years. I see it from time-to-time, and I think it’s accustomed to seeing me so is not alarmed.

Gorgeous blue coloring, Terry. You are definitely a braver person than me, even if it isn’t poisonous, I’m still skittish about snakes. Thanks, again, for including the history/background on this fellow. Nice capture.

The truth is, I hate snakes, Linda. They give me the creeps! But, I also realize they are beneficial and have a purpose in the world, so I try to be tolerant. And some of them are really beautiful. However, venomous snakes are not allowed to hang out around the house. Thanks!

Nice closeup – he does look l-o-o-o-n-n-n-g. Very nice that he posed on a BG that has some bits of blue.

I think he was at least three feet - maybe a bit longer. Yeah, after I processed this image, I doubted that blueness in the mulch, so I went out and looked, I think what that is are some berries that have fallen from a Rusty Blackhaw viburnum and have stained the mulch. However, even at that, I don’t think it’s that blue. I’m going to go back and take a look at the processing.

Luckily for this snake, you did not categorize it as a “danger noodle”. One of my favorite nicknames for a venomous snake. It looks like you were able to get a nice image of this coachwhip. F13 gave you enough DOF for the portrait. The West Texas coachwhips are sandy pink and they blend in nicely with the surrounding landscape. Well done…Jim

Look if you like, Terry, but don’t change a thing! The blue bits are a gift from the camera color gods.

I took a look @Diane_Miller , but those blue bits of berries are there when I enlarge the RAW file. They just become more obvious when the image is cropped.

The Western Coachwhip has that same sandy pink color west of I-35 in Oklahoma, @Jim_Zablotny. Thanks