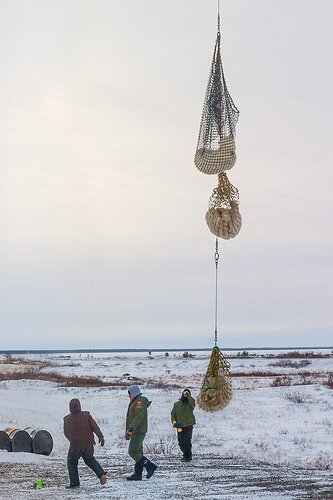 Known as the “polar bear capital of the world,” the town of Churchill in Manitoba, Canada, with its approximately 800 permanent residents, is perched on a spit of land between the western shore of Hudson Bay and the Churchill River. For centuries, this peninsula has been the polar bear’s natural point of access to the bay. It is the first place the Bay freezes over to allow the bears access to their prey, ringed seals. They migrate here about six weeks before they can gain access to the ice.
The residents of Churchill are tolerant of the bears, in general, but if a bear becomes a nuisance in town or the garbage dump, they take a very aggressive approach. Bothersome bears are tranquilized, captured, and carted off to polar bear jail. They are kept in captivity for 30 days, given only water to drink. They are then tranquilized again and transported back to town. Once in town the drugged bears are placed into cargo nets and attached to a 50 foot cable extending from the bottom of a helicopter.
These“flying” bears are then transported up the coast of Hudson Bay. How far they fl y them depends on whether they are first time offenders, or recalcitrant recidivists. Generally the flight is 40 miles, but can extend more than 60 miles. The bears are tagged with colored paint spots to identify them and be able to determine their wandering habits after release. Particularly problematic bears are flown progressively farther away in hopes they won’t return to town. Rarely are the bears put down.