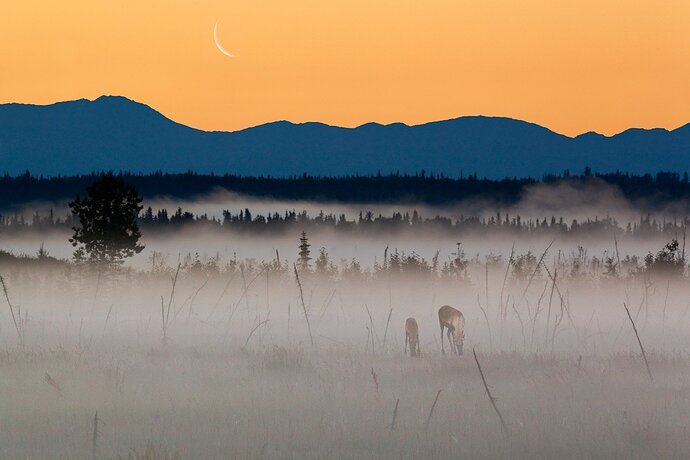 This photo depicts not only the conditions at the time of capture, but also serves as a metaphor for the status of caribou (Rangifer tarandus granti) living in the Kenai Lowlands. Historical records indicate that before the 1900s, the caribou on the Kenai Penninsula were common, but probably not abundant. It came as no surprise when the endemic woodland population was listed as extinct around 1912 due to overhunting and habitat loss from human-caused fires.

The existing four caribou herds on the Kenai National Wildlife Refuge are the result of reintroduction efforts by the U.S. Fish and Wildlife Service and Alaska Department of Fish and Game in the 1960s and again in the 1980s. However, due to continued exposure to human disturbance, the Kenai Lowlands Caribou Herd (KLCH) has grown slowly compared to the other three Kenai Peninsula herds and is currently smaller than its largest population size. Growth has been limited by predation rather than by habitat. Free-ranging domestic dogs and coyotes probably kill calves in summer and wolves prey on all age classes during winter. In addition to natural mortality, several caribou are killed annually by highway vehicles. Highways and the Kenai River bisect the calving areas. Caribou are commonly seen on the Spur Highway, Bridge Access Road, and Kalifornsky Beach Road, where road signs caution motorists to watch for crossing animals.

The KLCH reached its largest size in Spring of 1999, when 140 caribou were observed. That number declined slightly over the next couple years to 128 in June 2001 and has remained between 130–140. Total summer and winter range is approximately 1386 km2 (535 mi2), and the herd appears to be expanding its range. Concerns have arisen implying that poor quality habitat is the reason for the herd’s decline and range expansion. The range occupied by this herd is not considered atypical habitat for caribou. Rather, harassment by dogs and human disturbances may be pushing these animals into new areas.

To capture this image I went to the Bridge Access Road on many pre-dawn mornings, searching for caribou, under specific conditions. Many times I was rewarded with those favorable conditions—dense ground fog, clear twilight skies filled with warm light just before the disc of the sun appeared—and, on this day, the waning crescent moon was perched over the mountains. Initially I thought this was going to be yet another caribou-free event. Then, suddenly, this cow and calf began to appear through the fog, feeding on lichens, becoming more or less distinct as the fog shifted. Still, they were far from my position and my longest telephoto lens was required to make them large enough to be recognizable, especially when partially obscured by the fog. The density of the fog was variable yet critical to the story I wanted to tell—a new herd emerging from the extinction of its predecessor. While the KLCH is experiencing some level of growth, it abides perilously close to the brink of extinction. Unfortunately, their future remains unclear.

A tremendous image and story. The blend works beautifully. Nicely done. Shame about the herds though.

Thank you Ms. Smith. As a former zoologist I recognized, indeed, it was a story that needed to be told. The October 2016 issue of Outdoor Photographer magazine (OP) originally published this.

Wow, wonderful image, Bob, and a really interesting story. Thanks for sharing.

Wow!
Looks like two different worlds combined into one.

Alaska, especially the Kenai peninsula, is exceptionally diverse in every aspect—environment, weather, wildlife—as well as immense.