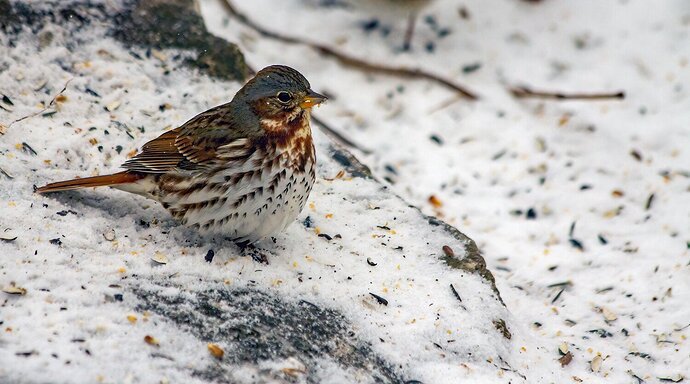 Though most folks would consider 2020 and, so far 2021 to be total busts (and rightfully so), I have seen more birds in my yard to add to my “life list” than ever. I have never before seen one of these sparrows. The Oklahoma Department of Wildlife Conservation states: Fox sparrows are found in habitats with abundant shrub cover such as thickets, mature forest and riparian woodlands. They are usually seen at feeders during periods of prolonged snow or ice cover. These birds are most likely seen in the eastern two-thirds of the state.

Well, we certainly have prolonged ice and snow cover right now, so they should feel right at home!

A very nice job, Terry, and a good catch. Lots of snow does bring strange birds to the feeders. I’ve seen four or five species that aren’t normally feeder birds the last few days and our snow has only lasted a few days thus far.

…y seen in the eastern two-thirds of the state.Well, we certainly have prolonged ice and snow cover right now, so they should feel right at home!Specific Feedback RequestedAnyTechnical DetailsIs this a composite: NoCanon 60D, Canon 70-300mm IS USM zoom, f/5.6, 1/1000 sec., ISO 1000, Hand Held. Processed in ACR and PSE 2020 for exposure, color, sharpness, and NR. Light application of Topaz De-noise.

Hi Terry, Great job, I like the detail and color in the bird. We are seeing some unusual birds here in the Midwest too. Thanks for sharing.

A really pretty sparrow. The chevron markings on front are the tell. This one is quite a bit redder than the ones we see around here, Vancouver BC area. Nice job placing the bird in the frame and a good pose. It is always good to add to your life list.

@Dennis_Plank Thanks, Dennis. I love seeing these uncommon birds, but I could do without this weather…

@Brian_Murphy Thanks a lot, Brian. I hope you get to photograph some of those unusual birds you’re seeing.

@David_Leroy Thanks, David. It is definitely a gorgeous bird. I took about 50 shots of this sparrow!

A very nice look at the sparrow in an interesting setting. I did a double take looking at the bird after reading the heading of “Fox Sparrow” and went to Sibley’s. It looks so different from those seen in the pacific northwest. I learned there are four sub-species with yours being called Red or Taiga and ours is called Sooty or Pacific. I’ve attached a shot from Oregon for comparison. 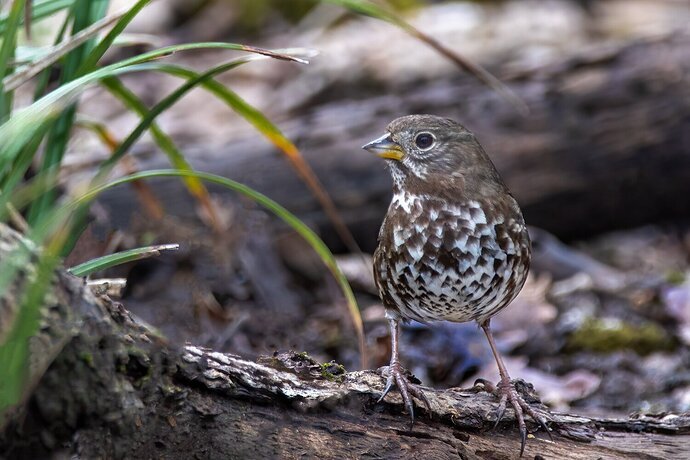 Thanks, Allen. Yeah, I researched this guy when I first saw him because I didn’t know what he was, and read about the four sub-species. Interesting how they have developed so differently. That’s a fine look at the Pacific Northwest region bird.

It has been a while since I saw a fox sparrow. You were able to catch this one out in the open and your exposure is spot on…Jim

Hi, Jim. Thank you very much. I appreciate your comments.