Thanks for your comments on my previous images! I appreciate those a lot.

I actually shot this on a late afternoon, but it looks more like a midday shot. I named it Hallelujah because it looks like the tree was raising its arms and shouting Hallelujah.

That said, It needs something, some adjustment or something to help it, and I’m stumped. Looking for suggestions and ideas - I’m open to one and all suggestions.

Many thanks in advance. 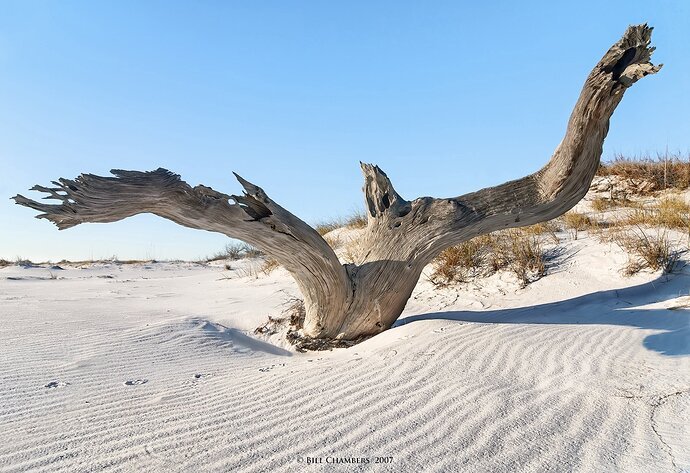 That’s a very expressive piece of wood. I can see why you decided to shoot it. I thought it looked like one of those long necked dinosaurs that lived in water. A ‘Nessie’ type of thing.

It’s interesting to look at an image such as this and try to come up with the answer. At first I thought the problem was the wedge between the branches, that there wasn’t enough separation. But now I think this image craves simplicity and there is not enough of it. Note how much better the branch on the left looks than the right. Ideally, you would not have any of the vegetation on the sand. Just sand, wood, shadow, and sky. I don’t think you can achieve than now any longer in processing. I don’t think you can make very significant changes any more. Although, who’s to say. A skilled processor could change this entirely. I actually like this the way it is. Given what you had to work with I think this is good.

I would be inclined to go B&W with it. Here is my 30 second version as food for thought. 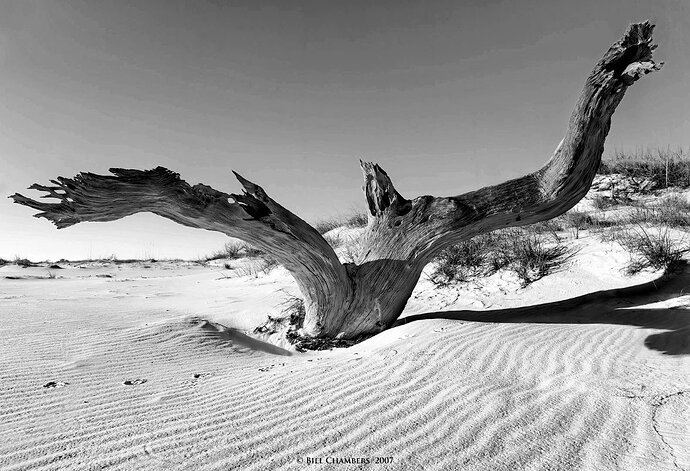 Great find! My first impression was more like a whale tale fin - at least from looking a far. Don’t see many trees in that neck of the woods I guess; and this one looks to be an ancient one.

Can’t say there’s anything terribly off in processing. So any comments are personal choices. The first comment is that I wishing for a little more room, especially on the left. But not a biggie.

Colors look pretty good, but I thought ever so slightly hot and somewhat pale in color? Not enough to say too cool though.

I took the challenge and here’s my thoughts. Lot’s of blue sky so color is important. I tried to reduce the cyan a bit and move more towards a blue hue. I also dropped the brights a little bit via a couple TK masks and Levels layers. I popped the color/contrast a tad also with an adjusted LAB Color layer at low opacity. Selective color to slightly warm things up in general. Last thing was trying to deal with the tree shadow on the right. Looked a bit blue after my adjustments. I masked and blended in a b&w layer to play with the shadows (I missed closest to the main trunk though.)

I tried b&w as well but thought with all that blue sky I just could get it compelling enough. Something like Harley’s rendition was about as much as I could muster.

Oh, I’m really liking the textures both in the sand the the weathered tree. 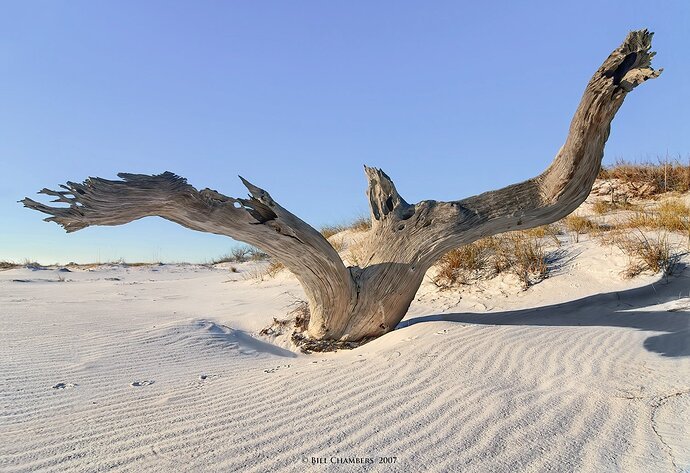 I actually think this is pretty good as is. The light is definitely coming from the left so this is just a thought but maybe enhance the left side of the image with warm light coming through and hitting those warms grasses on the right side. The sand ripples don’t have a lot of contrast between the shadows and the highlights making this look more like a mid day shot so you might think about selectively adding in contrast to the sand ripples. I too think this looks like a whale tail and having the ripples more defined might make it look like a whale doing a breach and then dive into water. I do find the dog prints a little bit distracting as well as the LRC where there is a semi swirl that interferes with the sand swirls. Good of you to get low enough to have the left branch clear the sand. OR…you could just leave it as is and enjoy it!

Thank you @Igor_Doncov, @Harley_Goldman, @Lon_Overacker, and @David_Haynes for you comments, suggestions, and revisions. Harley, I had already planned to do a B&W version so I’ll probably try that today sometime. Lon, Thanks for the re-work; I like your blue better than mine, but I still like my sand a bit better (only because mine is closer to the actual color). Our sand here is almost pure white. David, you mentioned the lack of contrast and I agree with you completely. I shot this 13 years ago so obviously I don’t actually remember, but I imagine these little ripples were very shallow and just building because the contrast is usually much more. The contrast you see here has actually been burned several times and they’re still very light. Actually, the process consisted of layers of burning darks 1 & darks 2, which in turn also darkened the sand a bit also, then dodging Lights 1 to return the lightness to the tops of the ripples, and then I copied the end result twice to make it even more noticeable.and this is still a rather miserable result. That was, by far, the most difficult process and yet yielded still a bare minimum of an acceptable result, especially give the late hour of the afternoon. Such is the life of a photographer sometimes, huh? LOL. Thanks again all, for your help!

I think that on its own, this is a very nice image. A lot of useful thoughts floating around. If I could go to this place I would - a cloudy day would help. Or early morning light.As someone pointed out, try positioning yourself in such a way so as to get both tree limbs off the horizon
I am always looking for foreground material for astro landscapes and this would be ideal - you would need to stand on the other side of the tree for the MW between the limbs - of course, also dependent of the time of the year etc

You’ve got some great suggestions for possible edits. I just want to say this image really caught my eye. I think it is the low perspective on this interesting tree shape. I like this a lot!

Bill: Of course hallelujah means praise the Lord so on this day this image caught my eye just for the title alone. I’ve found this thread very instructive with regard to the processing which is not my strong suit. As for the original subject and capture I very much like how you composed this and the overall scene. Happy Easter to you. >=))>

Bill, Happy Easter to you as well.