I had this bird show up at my pools on Friday along with a bunch of others. I think it’s an Orange-crowned Warbler, but the white on the wings is throwing me. I’m located in the South Puget Sound Region of Washington State. 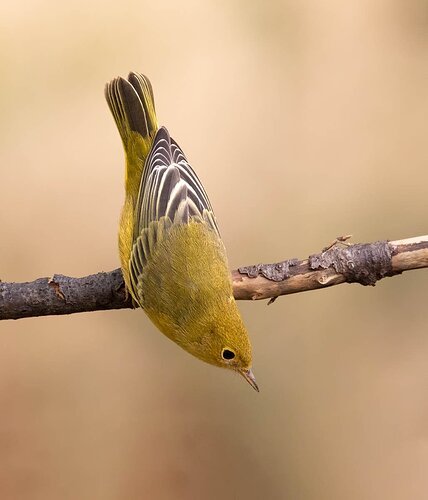 I agree on the ID of an orange crowned warbler.

The white in the secondaries is very unusual for orange crowned. It is the most reasonable of guesses to make…Jim

Thanks, Jim. There were two of them that came in together and although I don’t have quite as good an angle on the other, it doesn’t appear to have much if any white. I’m thinking it might be fringes on the edges that wear off quickly or an individual abberation.

This is unlike any Orange-crowned Warbler I have seen here in AZ or elsewhere. My call is Yellow Warbler.

Do you have any shots showing the underside of the tail - that would differentiate between orange-crowned and yellow.

Hi, Rich. I was hoping you’d chime in on this one. I’m pretty sure I have a shot of the underside. I’ll go through the files when I get on my computer later this morning and see what I can find.

Hi Rich: I thought I’d saved a butt shot of this one. Here it is. I hope it’s definitive.

Thanks for finding this view. Based on it, plus the darkness of the wings and yellow fringing, and the streaking on the breast seen in other views I’m convinced this is a Yellow Warbler.

Thanks, Rich. I’ll have to go back and change the ID in my metadata.

I think it’s a Yellow Warbler as well.