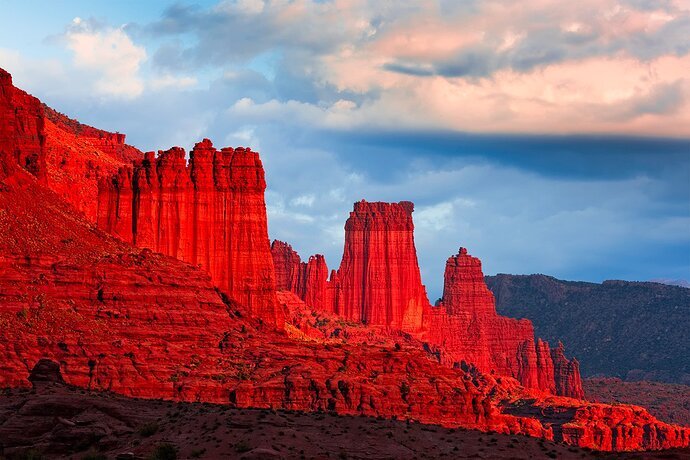 In the entire Colorado Plateau, you would be hard pressed to find a spot more vibrant than this one, Fisher Towers, at sunset, when the dark brown and purple walls, as seen persisting in the shadowed foreground and background areas, become almost completely red.

Thank you, David. It is a spectacle to behold. In August 2019 I submitted another image from the same day, location etc. but minutes apart. The principle difference is that in the earlier post the nearest tower and ridge are in shadow. Some commenters were convinced this was pure fantasy created in Photoshop. I am attaching that image below. That submission also included an image made of my gear and setup aimed at the towers. 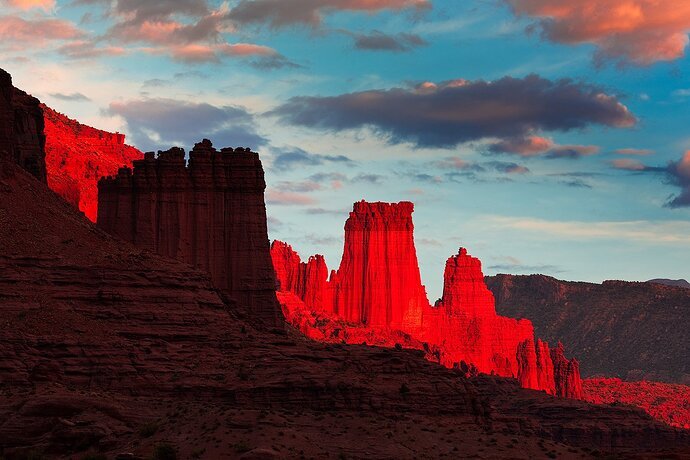 I like this second one too, but I think the first one holds it for me. Awesome.

Bob, I’ve been there under the same conditions - so this is no photoshop fantasy. I can understand why someone who has not experienced a redrock sunset might be skeptical.

The clouds have a lot more color in your second post. Too bad they didn’t light up for your first post.

Thank you, Bill. I tend to listen to the comments, but often the complainer(s) reveal their lack of experience and understanding. I am not inclined to argue with them.
The two images were made at 6:02 pm (top image) and 6:28 pm (bottom image), twenty-six minutes apart, which accounts for the changes—cloud positions and color, and the shadows on the rocks.

Beautiful photo! I’ve tried that shot four times, and everytime is different (suprise, surprise). One time it lit up like your photo, the other three not so much. I can’t figure out what the variable is. Obviously, if the sun is blocked by clouds or there are strong clouds overhead that could effect it. I’m wondering if the time of year and angle of the sun makes a difference. Any opinions?

Thank you, Tony. Yes, I believe the time of year and angle of the sun make a difference. I have been making images of Fisher Towers since 2009. I have made images from a number of positions with varying formats, both vertical, and horizontal, including panoramic, sometimes including the moon. I have used a number of focal lengths from 16mm to 400mm, depending on my desired composition. All my visits have been between May and July. I found the weather was cooperative—always clouds, but high enough for there to be an open space between the horizon and the base of the clouds just before sunset, the optimal time to “get the shot.” 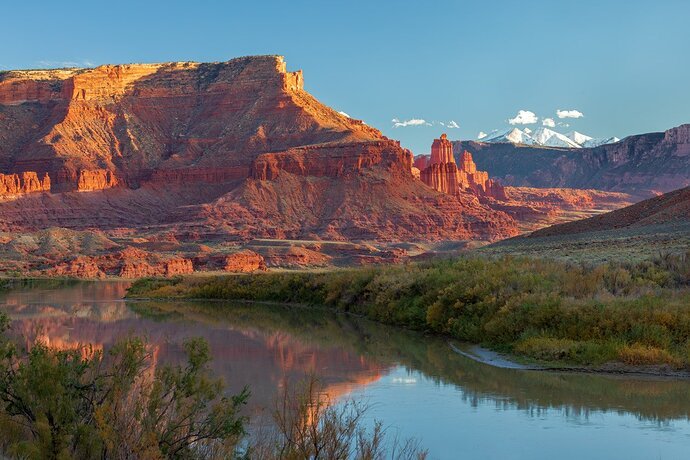 Thanks for the info. I’ve never photographed the area except in the winter and fall. This is a favorite composition of mine, taken down the road, in early November. Nice colors but certainly not the amazing red in your photo.

Nice image. I know that view. It can be tricky to get to the riverside, bushwhacking through the willows.

Wow, I love your 2 images and comments Bob. And I like Tony’s image also, as I also tried a shot from a similar location along the road approaching the Towers from the north. I totally struck out on my day to photograph the towers in early May of this year. First we got lost on the trail, and then we couldn’t stay for sunset. But thanks to you, now I know when to be there.

Thank you, j. Mark. I am pleased to be able to help you to capture an image that has eluded you. If you didn’t visit the first post from August 2019, I am attaching the image showing where I was to get that image—probably a mile away from the Towers, across the highway in a campground. 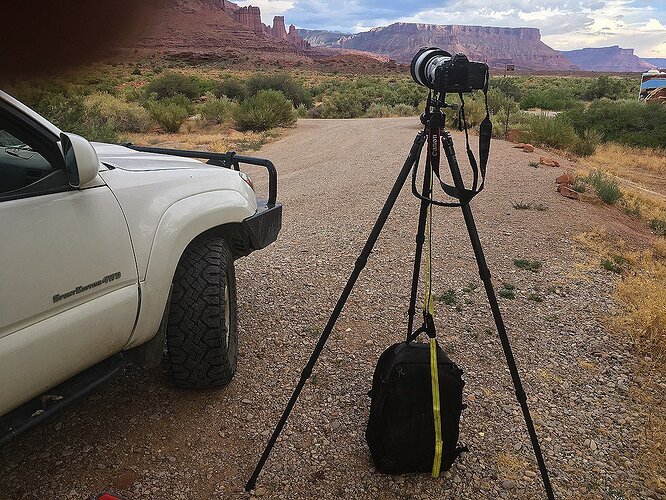