Lewisia on the cliff 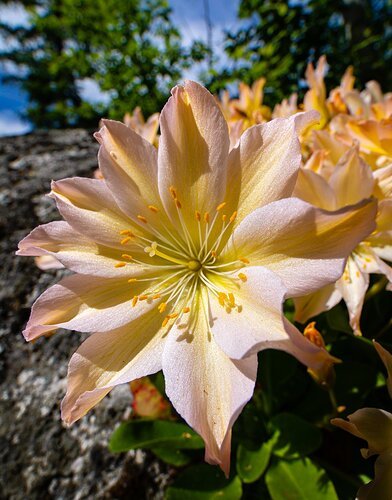 Tweedy’s Lewisia
Lewisiopsis tweedyi
Is a local favorite to see early spring usually hanging from rock outcrops. This plant was no exception and was one of the densest bloom I’d seen in years. These days I’ve learned to carry my climbing ropes and harness in order to safely gain access to some of the flowers I often have two ropes fixed so to rappel on one and secure the tripod and camera with the other. This image made with the Laowa 15mm to show plants in its ecosystem as well as macro of the blossom. It requires the front lens element to be only a few centimeters away from the blossom. Delicate action is required in tripod placement and rope management. Final focus on nisi focusing rail. 12” soft white reflector for fill.

Lewisiopsis tweedyi is a flowering plant and sole species in genus Lewisiopsis. The species, formerly known as Cistanthe tweedyi and Lewisia tweedyi, is now classified in the Montiaceae family. The plant is known by the common names Tweedy’s pussypaws, Tweedy’s lewisia, or Tweedy’s bitterroot. It is endemic to western North America in north-central Washington and adjacent British Columbia. It commonly grows on well-drained slopes often on rocky slopes or in rock crevices from low elevation ponderosa pine sites up to the drier part of the Grand Fir zone of the North Cascades. The flowers usually have a coral, apricot, or pink color.

Lewisiopsis is endemic to the Wenatchee Mountains and Methow Valley of Washington State, and in Manning Park of British Columbia. Populations may be found nearIt is one of the regions showiest herbaceous plants. It has a limited geographic range but is quite common within that area.

@MichaelPower I love this image! It’s a beautiful flower, and it sounds like half of the fun is just getting up to it

edit: removed a slight critique, apologies! Did not notice this was a showcase.

Only photographers would really understand the effort you put in here - thanks for going to the trouble and giving us some info on the plant. The end result is certainly worth it. The colors work well together here and the prominence of the main flower with the other cascading behind also does. Bring us more!