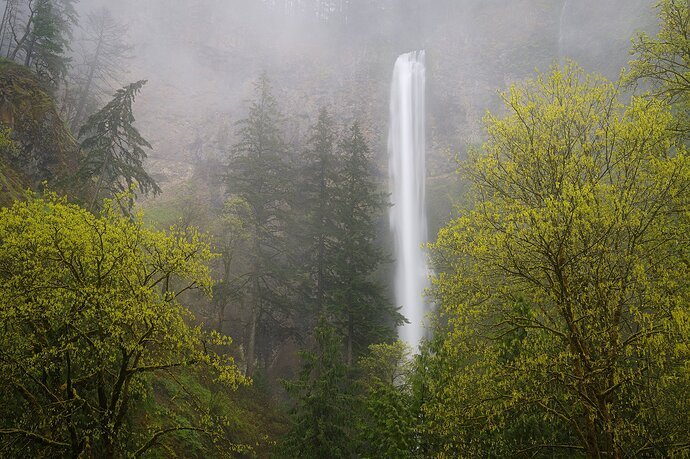 I’ve always gotten a tickle out of photographers using hyperbole to describe their decision to take a photograph. A pretty common example I see is “So I was driving along and saw this scene, and I knew I had to stop and take a picture.” (No, there was no gun to your head or threat of legal punishment, you just liked the scene and wanted to take a photograph.)

So I was driving through the Columbia River Gorge in April of this year and saw clouds dipping along the top of Multnomah Falls, and I knew I had to stop and take a picture. There was a horde of people below, as is typical for this location, so I chose to photograph the upper half. When the Big Maple leaves begin to grow in the spring they have a strong yellow tint, and I liked the way that contrasted with the cooler tone of the fog, the green of the conifers, and the reddish tint of the cliffs.

This is a wider composition, so the falls aren’t dominate in the image. Does that work? Do you recommend cropping?

Do the small areas of sky showing through the fog at the top annoy?

This is awesome… you might do some perspective work on the upper left so the trees are not leaning sideways at an angle… otherwise looks great to me.

I think that it’s a captivating image John (I saw it and just had to stop to comment).
A beautiful scene with a range of lush greens to frame the falls. The misty top adds atmosphere and I don’t mind the small amount of sky.
Some of the trees on the left are leaning, but I’m guessing that they possibly were leaning…not sure if they need fixing.

Great shot John. I’ve shot the Gorge for years and honestly a lot of the shot have gotten so formulaic, that to see something slightly different was refreshing. To give an opinion to your specific questions,

I kind of like the wider composition for this shot. The trees are in good shape and add nice context to the falls. Instead of a “waterfall” image, with the falls dominating the image, it’s a “forest scene with waterfall”, which I like a bit better in this instance.

As for the bits of sky poking through, normally I strongly advise against that, but honestly they don’t catch my eye that much. You could do a bit of content aware fill to remove them, but really they don’t distract to my eye.

Oh, and the image ain’t to shabby either. Quite wonderful actually! I love the mood here and the mix of the vibrant spring greens framing the misty dark pines and of course the falls. Beautifully seen and captured.

(I saw it and just had to stop to comment).

That cracked me up; good one.

Thank you all for the thoughts and feedback!