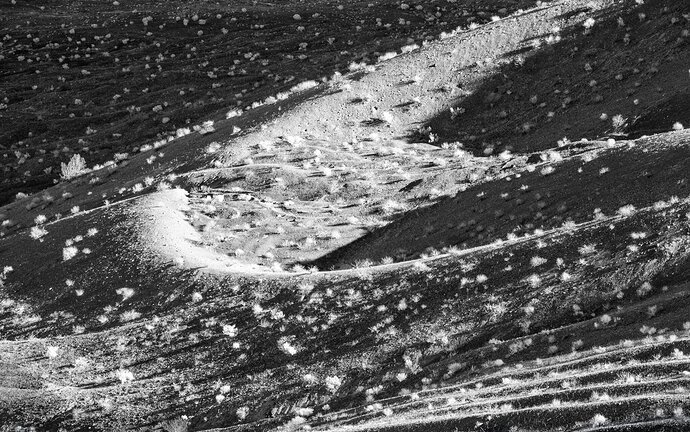 I took this photo a few weeks ago at Eubehebe Crater in Death Valley. At first it seemed that there wasn’t much of interest to photograph, but as I spent time looking and moving around the area, I found many intriguing textures and lines.

Any feedback is appreciated. I don’t do much black and white, so there may be some things in that regard that could be improved.

Looks to me like you have a good eye for structures that can be rendered well in black and white
The sweeping curve and supporting lines are engaging.
I wonder if the color of the lighted sloee is sufficiently different from its vegetation that you could darken most of the slope and let the shrubs glow against it. I would not darken the top edge of the slope, as that would be a wonderful eyebrow.

I know this spot very well, having spent a couple of mornings right there. Nice job on capturing the light and shadows along with the textures created by the bushes. Dick’s idea would be fun to try and see how it changes things.

Dick - That’s an intriguing idea. One of the things that attracted me was the the bushes glowing against the shadows. How would I go about doing that? Luminosity masking? I use Lightroom.

I am just getting into the fringes of Lightroom new advanced masking, so my thoughts are based on PS capabilities.
First, does a color difference exist between the soil and the bushes?
Can you selectively desaturate the color of the soil, so that it darkens and leaves the bushes brighter? I think LR Mask based on Color Range, and subtracting based on a brush or luminosity might be worth a try.
Then maybe apply desaturation to selected soil.

The textures in this image and the sweeping line are fantastic. I think that this looks great as a B&W.

A nicely seen view. I’d start by doing whatever I could in raw processing to lower the brightest tones, then experiment with the color sliders in B/W conversion, in the raw file as much as possible, then I’d take the color version with best contrast into PS and try B/W there for comparison. You could have the best of both worlds by bringing it into PS as a Smart Object, which lets you change the raw sliders right there underneath the PS B/W adjustment layer.

@Diane_Miller Thank you so much for taking the time to give this valuable feedback.