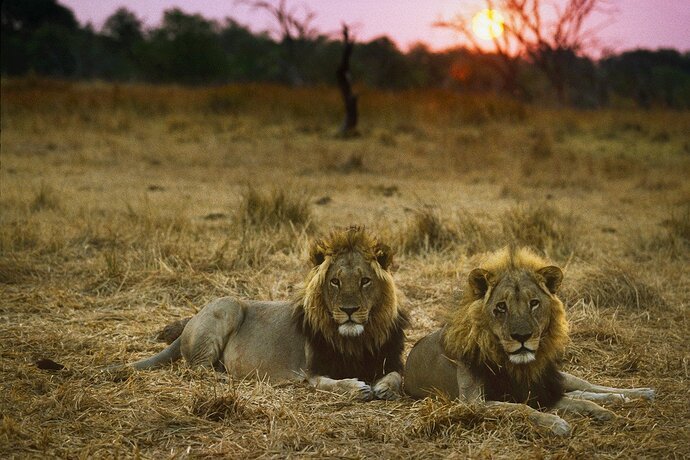 Young male lion brothers (Panthera leo) awakening on the savannah, near Bodumatau Lagoon in the Okavango Delta, with the sun rising behind them.

What a gorgeous pair. Is it true that male siblings stay together for a while before going for their own prides? They certainly look comfortable with each other. Great relaxed poses. The sun behind is nice - works well for an environmental shot and enhances the feeling of ease and serenity the lions seem to be feeling/enjoying. Such a treat to see them. Thanks for sharing.

Thank you, Ms. Smith. Short answer, yes. Lion pride society is fairly “standard” within the genus, Panthera leo. Generally speaking each pride has an Alpha male and female, the primary progenitors. Males of 2-3 years are driven out. However, some prides have 2-4 mature males. All the pride females mate and sometimes an individual will leave the pride to join another or start her own group.
The expelled males from a litter, up to four, will wander on their own gaining skills and maturity. Within each such group one individual will assume prominence by consensus. When they develop enough self-assurance they seek out a pride to challenge the Alpha male to drive him out or kill him. If successful, he and his brother(s) then kill the pride cubs and begin a new genetic group.