My short nature film of the PNW 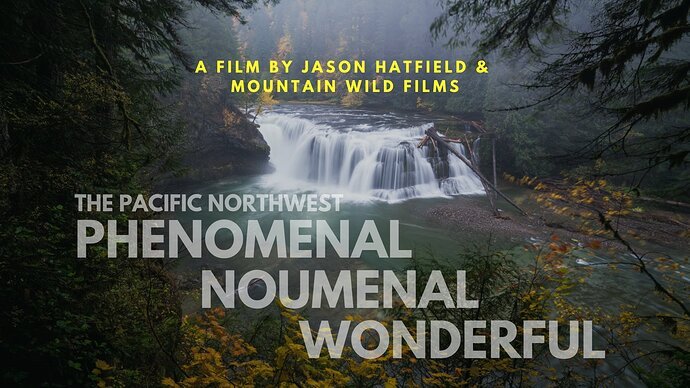 I just finished a multi-year short nature film project of the PNW landscape. If you’ve seen my Colorado Timelapse film it’s similar to that style: many of our favorite places to photograph edited with impactful music using timelapse, aerials, and stationary shots. Phenomenal Noumenal Wonderful

I’d appreciate any watches and would love to answer any questions you might have! Thanks!

Wonderful, peaceful film. Thanks for sharing.

Thanks, Keith, I really appreciate it!

Jason, I really enjoyed your film. Viewing it was a beautiful way to start my day!

Thank you, Alan! Glad you enjoyed it!

Beautiful in every way. Congrats on what appears to be a flawless production.

Beautiful film! The images are just incredible, the quality of light superb, and the score matches the images and overall feel perfectly. I especially like the wide variety of scenes. One question for you: Were the low altitude scenes filmed by drones?

Thanks @Marc_McCann! I put a lot of work into selecting the music and editing the film to it so I really appreciate that you noticed it. I definitely wanted to try and get as much variety as possible but I had to leave out more scenes of the coast and desert than I originally wanted, but they just didn’t work with the flow of the film. Yeah, the aerials were filmed with a drone, I’m a licensed UAV pilot, and all flights were within legal areas when flown in 2017. I use AirMAP and GaiaGPS to identify no-fly zones and wilderness boundaries, as well as an aviation mapping app to identify common flight paths.

Well done, Jason. Nice UAS imagery along with your ground based video. Looking at the video, I’ve been to many of those places but now kick myself for never taking some video. Hearing the sounds of the water and waterfalls is alway sweet.
Cheers

Thanks @Josh_Latham! Hopefully, I can do a future one with an even broader selection.

Thank you @Ken_Henke! I have even more video from waterfalls that were burned in the CRG that didn’t make it into the film. It’s a small comparison to the real thing but it’s nice to be able to somewhat experience those places again.

Jason, Really enjoyed this! Thank you!