Nerding out and looking at my photographs

I just wanted to share this because quite honestly, I don’t think anyone else cares and I was hoping that at least someone here might appreciate it….

I have a collection of 100+ favourite images of mine that I’ve taken over the past 15 years and recently I took some time to analyze them to see if I could find any interesting trends or really anything else that stands out. I then took the data and I made a set of charts and here are the more interesting ones (to me at least): 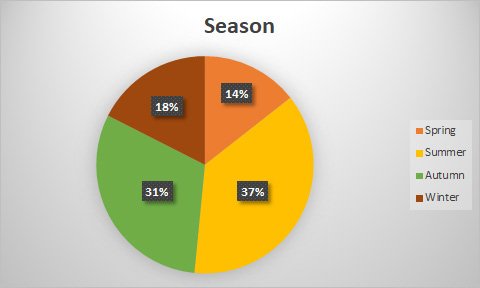 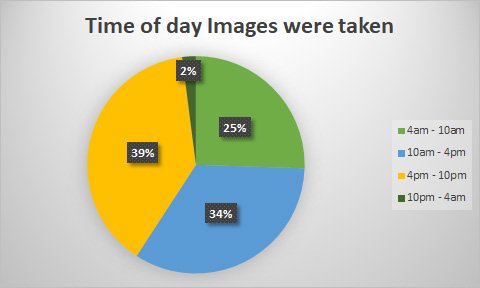 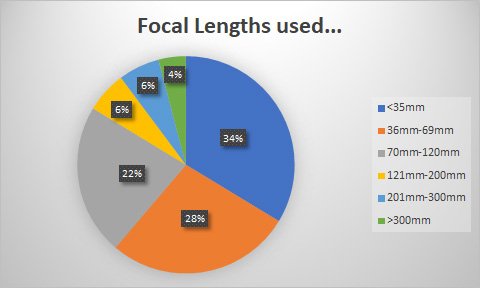 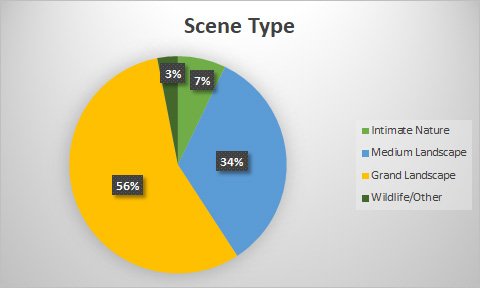 So there it is, and what am I coming away with here? Well, I would like to, and will work on learning to “see” the smaller, more intimate scenes. I would also like to learn to “see” and photograph scenes with a shallow depth of field because almost all of images are sharp edge to edge.

I’m curious if anyone has done a similar exercise in the past and what have you learned about yourself?

Tom, you’ve done an excellent job of tracking your data overall. To answer your question at the end, No.
Although I do spend time using the Weather Underground, TPE program, Google Earth and overall GPS unit my data is more pre-field information. I do know others who have a lot of post data like yours but I’m sure it’s not at the same impressive level you have.
Thanks for sharing this extensive outline, Tom…

This is pretty cool data, Tom. I haven’t tried to do anything like this, but I do go through my Capture One Catalog and see how many cameras, focal lengths, lenses, ISO settings, etc. I have used in 20 years of digital photography. It’s a little embarrassing to say that I have had 21 different digital cameras over that time. Lots of buying, selling, and upgrading. Very expensive passion here.

I think my spring and autumn images would be the highest for the seasons.

Oh how wonderfully nerdly of you. I’ve been on a book cataloging site for 15 years and so I love hard, crunchy data. I wish Lightroom fed it to more more granularly, but I was able to grab some of the same stats from my shots. I used the Yearly Best Of collections since they were handy – 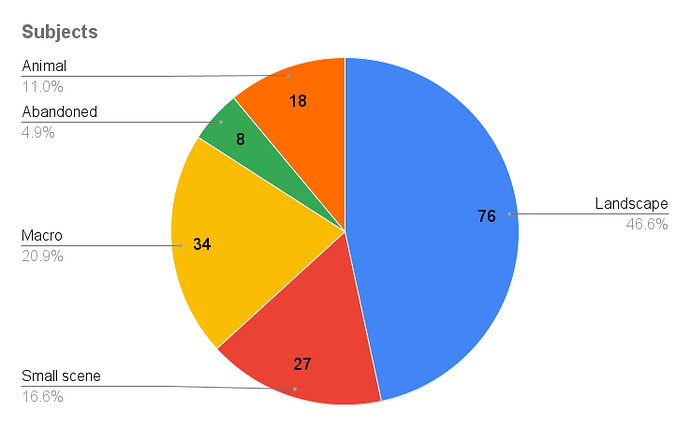 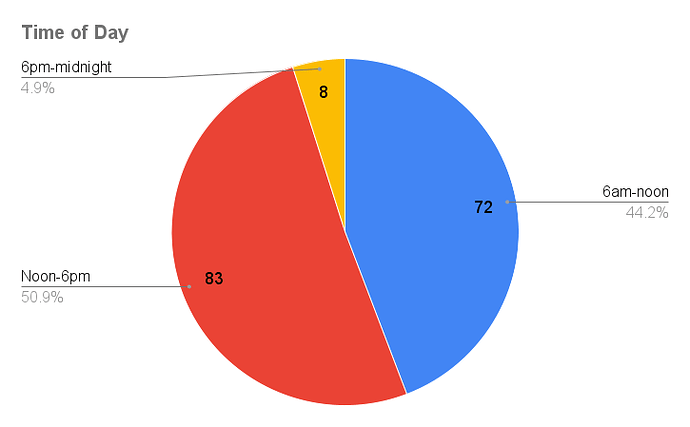 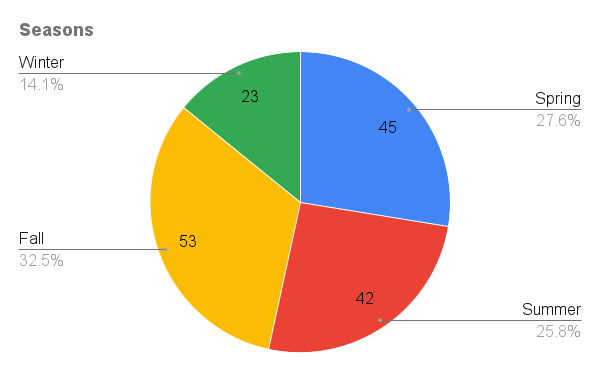 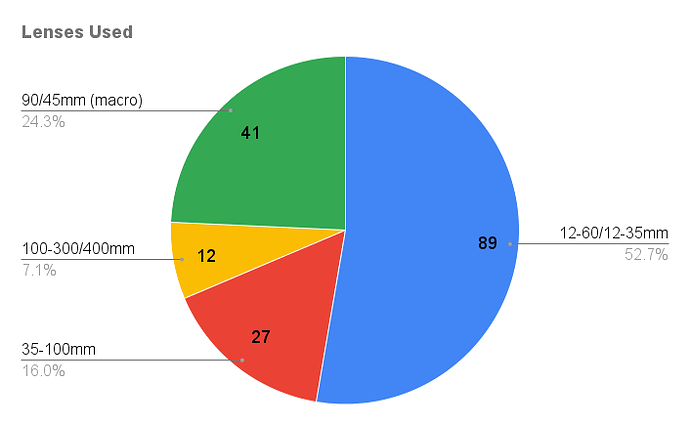 Thanks for the nerdly workout!

@Paul_Breitkreuz , I do quite a bit of pre-shoot planning on the computer as well. I did it a lot of that for my time-lapse project because shooting a time-lapse requires a lot of set-up time and it’s hard to do it in a hurry out on location. I had a bunch of locations scouted and I decided ahead of time when it would be best to shoot them and whether to use any camera movements like pans or slides. With still photography I generally don’t do that much planning – mainly just location and sun information from TPE.

Here’s another fun stat that I just pulled from my images: 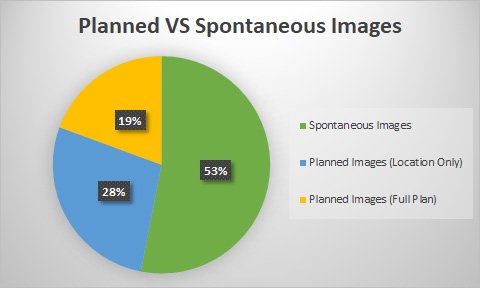 Keep in mind that all of these stats are based on my personal favourite images and it would be interesting to see ho similar or different this is compared to my images as a whole.

@Kris_Smith, thanks for sharing your data! It’s fun to look at it (for me at least). Did you learn anything about yourself? For example, before I did this exercise, I would have thought that most of my images were grand landscapes, shot at sunrise, and in a vertical format (I shoot in the mountains a lot and do quite a verticals). Turns out I was wrong and I was genuinely surprised that more of my images were from evenings rather than mornings and that while I still shot more grand landscapes, I had quite a few smaller, and not what I would call grand landscape images.

I thought I shot in winter more, but I was wrong. Not much else surprised me. I know how I shoot, when and where. A lot of it is laziness - I do some pre-planning, but mostly it’s just what the weather looks like and what the conditions are good for. Unless I’m at a workshop, sunrises and sunsets are time for beverages - coffee or a cocktail!

WOW, by spontaneous I assume you mean while driving or hiking you just happened upon the image at the right time? If so I’d say my area of success on that front would be nil. Some of that could be as a film only photographer we rarely have an event that meets the instant moment so to speak. Now, I will say I’ve had numerous return trips to sites or items of interest that I stumbled upon “spontaneity” , but had to wait for right conditions or gear to do the attempt justice. I do think digital provides more of an ease as it were to respond quickly to an event. So, that spontaneous connection is a given I would think. Thanks again, Tom.

I’ve totally geeked out like this before! If you have a Mac there’s this great app that analyzes all your photo’s metadata and you can create reports based upon just about anything. I found that over the years I used my wide angle less and less each year and my telephoto usage went up greatly each year. I’ll have to run through this again since it’s been a couple of years since I last tried it. 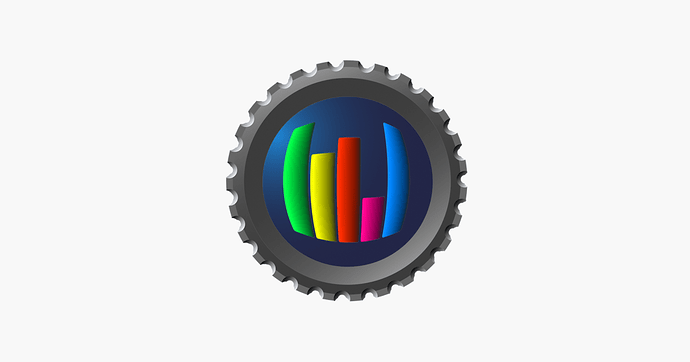 ‎PhotoStatistica lets you stand back and see the big picture. PhotoStatistica's innovative tools gives you the ability to draw powerful insights about your photography by visualising EXIF data across large libraries of your images. PhotoStatistica...

@David_Kingham , I had a look at that app and it looks pretty cool but unfortunately, I’m on Windows. I’ll see if there is something similar for windows though.

You’re right, I really do need to get out more. A lot more!

Unfortunately I don’t get out nearly as much as I’d like to.