Hi – Not sure this is posted in the right place. I have a Z7ii and was taking a number of panning shots at a slow shutter speed to blur the background. Most turned out fine, but several had some artifact in the upper right corner. See image attached. I was shooting with a 28-300mm and using an FTZ converter at about 1/40s. Any ideas? 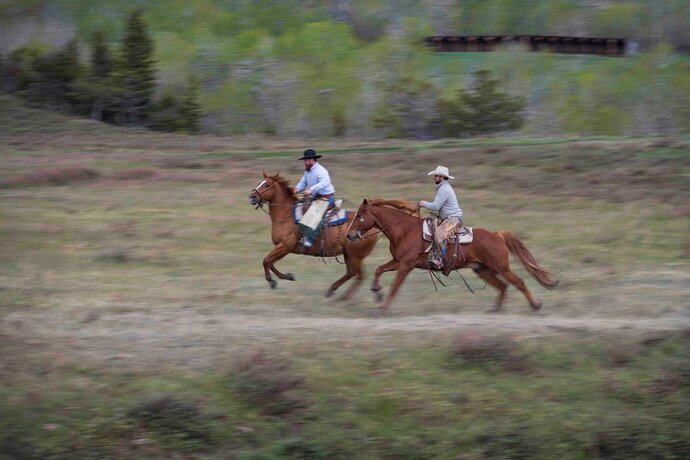 Bizarre!! Is the strange area identical in the frames where it appears? Are they in contiguous frames? What shutter mode?

I love the capture of the horses and riders!

The shutter speed was 1/40s, and i have several other both with (in same spot), and without this strange artifact.

Are you saying that dark brown thing in the upper right is the artifact? I would swear it’s a covered bridge or something…

Seriously though, if that’s the issue, I wouldn’t classify as an artifact… but something is broken and not behaving properly! I don’t know anything about mirrorless (this is one right?) so I’d be hard pressed to offer a suggestion - other than to send it in for repairs! For all you know it could be a class problem?

If that long brown thing isn’t the artifact, then I’m missing the issue…

Hope you get resolution. And BTW, a terrific pan capture of the horse and riders.

I’m thinking the long brown thing is a train. I do like the gallop capture at the slower shutter speed.

Hi Scott, it might be a train, but the real problem, I think is the blur caused by the electronic rolling shutter. If you’re using the electronic shutter while panning, this would definitely cause an effect like this. However, something had to be there in the first place…It’s interesting because midway through the line of dark, the trees in the foreground obscure the line. So something had to be there physically, in my opinion.

Until we get Global Shutters, the use of electronic shutters should be limited to static subjects. Here’s an interesting article that might help:
Mechanical vs Electronic Shutter vs EFCS
It’s a lengthy article, but has great info about which shutter to use when…

Thanks David! I have sent to Nikon for their opinion.

Sounds good, Scott. Let us know what they say.