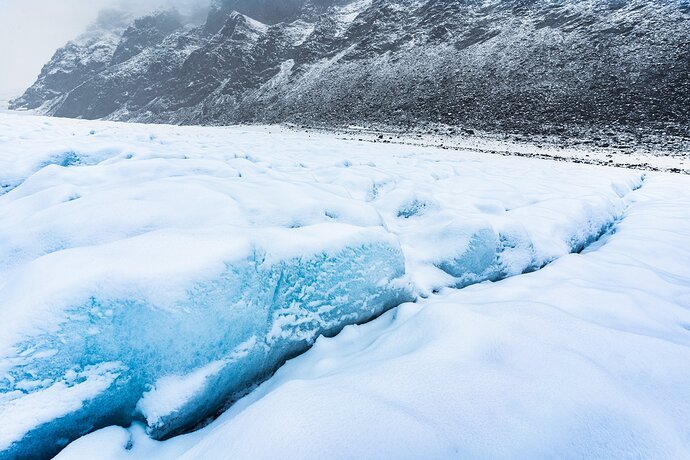 By the beginning of September, the short summer melt season will have resulted in a sculpted glacier surface that reflects the vagaries of ice flow, surface exposure to solar radiation, debris transport, and meltwater channeling. Soon, however, the day arrives that the first accumulating snow occurs and, with winter’s onset, the glacier begins gaining mass once more. Of course, in our warming world, the annual balance between winter accumulation and summer melt (ablation) is far out of equilibrium for most of the world’s glaciers, this one included. On this day, steadily falling snow precluded any productive research work on this Swedish glacier, so instead, I spent several hours wandering, camera in (cold!) hand, a relatively safe area of the ice surface. This composition was the one that best captured the feeling of the moment.

Have at it! What works, and what doesn’t? I don’t add blue to the glacial ice, but I certainly have increased the luminosity and saturation of the blue that naturally exists. While the blue is definitely real, admittedly it didn’t look quite this rich in real life. Is it too overdone? I really wanted to separate the deep cold blue of the old ice with the bright white of the freshly fallen snow. I’m comfortable taking a bit of artistic license, but I still want to be true to the moment.

The blues look natural to me, with nice contrast to the white. Good for you, taking artistic license!!
I also like the two diagonals. They add interest.

Color wise it looks very natural, but then again I’ve never seen a glacier in real life. What does that grow me off is the scale. I get get a sense of how deep the glacier is in the photo. It looks massive compared to the mountain wall but I’m not sure if it just looks bigger due to the wide angle lens

Excellent! Like Youssef, I’ve never seen glacial ice up close and personal like this - but for sure, the colors seem quite natural and appropriate. Great job processing and I think you’ve accomplished what you wanted to do in separating and showcasing that blue ice. Well done!

From just the thumbnail, I’d say this is almost a mind-bender with the diagonals and not being “level” with the receeding/angled shoreline. And then the large view everything comes in to clear focus and again, those diagonals work quite beautifully in your composition.

Thank you @Mark_Muller , @Youssef_Ismail , and @Lon_Overacker for your comments. My wife wasn’t getting the vibe on this shot, and I’m starting to think it’s a less compelling composition than I originally thought. Thanks for the feedback on this in any case.

Hi Jeff. Your wife might be ho hum about it, but I really like it. It certainly reminds me of areas that my wife and I check out occasionally. The blue does seem a bit vivid to me and is more saturated than the galcial ice colours I am used to seeing, but I think it adds some depth to the image. I am really liking those small snow-covered peaks and valleys in the top left…they do add some extra interest to the entire scene. The repeating diagonals of those ridges look good, and I don’t see a problem with the level as the slope seems to be what you would expect to see if you were standing just there on the ice. Cheers.

Thanks @Phil_G. Here’s a version with slightly more subdued saturation in the blue ice. I think I prefer this one, actually. 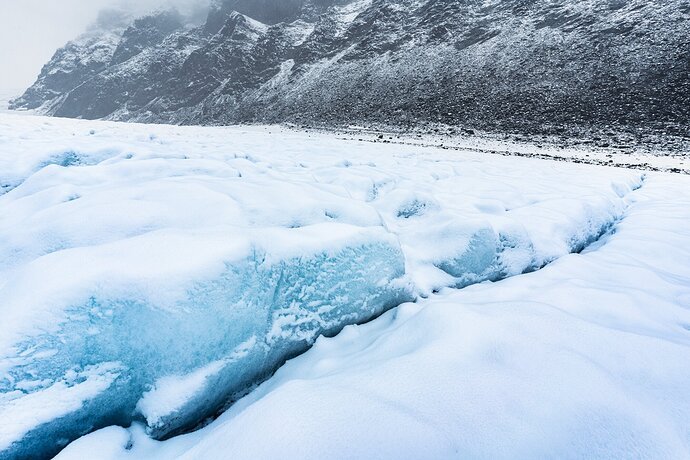