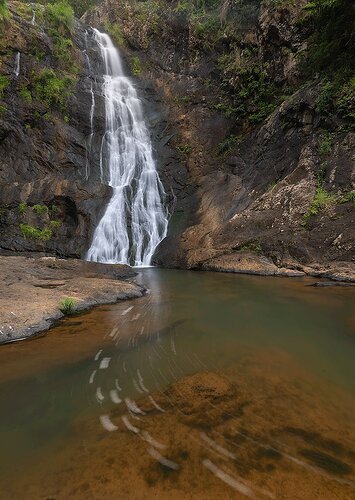 This has that 50-50 look where a strong horizontal line separates and creates two different compositions. This is particularly noticeable in verticals. That’s my take on it. Others may disagree.

I agree with @Igor_Doncov . My initial feeling was a sense of discontinuity - that the image doesn’t quite hold together as a whole. That being said, I think you were on to something with the “star trails” in the water’s current. But they’re too sketchy and so, almost feel like a mistake. I’m not sure how long your exposure was but I suspect for that section of the water you’d want something in the 10 to twenty second range to get a sense of continuous flow that would pull the eye from the lrc along the curve and right up to the falls . Then you’d have a very sensuous “s” curve comprised of the “star trail” and the falls themselves that would unify the image. Well, that’s my story and I’m sticking to it

I had never noticed this kind of matter. But I certainly understand that these are two views that have independence and lack of continity. Thanks for the commentary