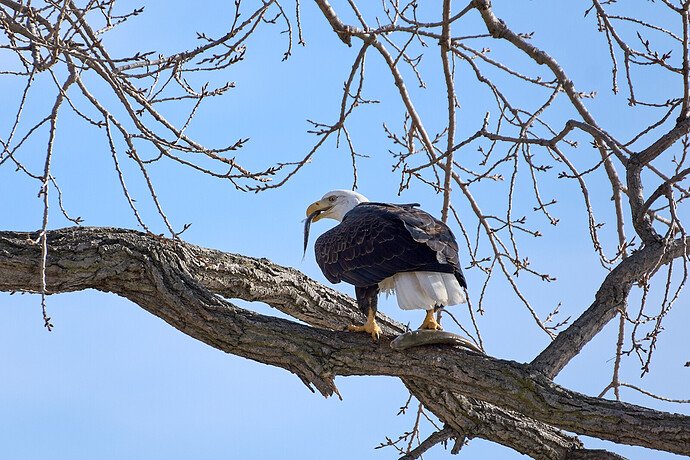 These fish weren’t in too bad of shape yet, but they certainly couldn’t have seen a worse day. It was all downhill from here. The one in the beak went down whole, but the one in the talons not so much. When I was reviewing my images, it was totally unexpected to see that this eagle got two fish at once. I was with someone who goes out a lot, and he was surprised also.

Many of the eagles have dispersed with the warmer weather and lack of ice on the river, but we still have a few. I was shooting in a new location today where I was generally much closer. I’m really not a “bird photographer”, but they inspire me to get out in the winter with my camera. I’m hoping to improve some with practice.

Any. I know that the pose is not the best, since it’s the back side of the bird. I had already spooked one, so I was not comfortable with trying to go around to the other side.

My editing screen and my mobile devices were differing some on color. I don’t feel like I have a good eye for tint. There was strong sunlight from the right.

I lifted the exposure in post, and I played a little with color trying to retain the warm look but keep a more neutral/natural sky color. I felt like the raw file seemed slightly magenta maybe.

The pose doesn’t bother me because there is eye contact. Plus I like the side view of the beak and the doomed fishie. I am not the best bird photographer either, but I know enough to shop shooting when we’re not looking at each other so this to me is acceptable even if we get a tail view. And two fish! Oh my that’s excellent. I’ve watched so many from the dock or the kayak come up empty that it’s nice to see they get a decent score now and then. Since the branches aren’t adding that much IMO, you could crop more I think. Also maybe clone the couple that are poking into head and butt. Just some ideas to play with on a nice catch of an eagle with a nice catch!

Oh and when you say tint do you mean a color cast either green or magenta? I don’t see anything like that here although the blue seems a tad washed out, but I think that works in keeping us from looking at the sky.

What a fantastic catch…for you and the eagle!

I like that the head is framed by the sky, as well as the side view. I actually didn’t see the second fish in its talons until I read your description. This tells a great story. I am not great with post-processing but I might experiment with slight saturation of yellow, which seems to be in the bird and in the buds on the twigs, and a touch of contrast?

This tells a great story.

@Kris_Smith Thanks for the comments, Kris. I don’t have the best lens and I’ve pushed this quite a bit by cropping, but I think I could get a little more out of it. I tend to forget that there are tools out there these days to remove branches.

I haven’t played with that much, but I should consider adding that to my workflow more often.

My first edit had a bit deeper blue, but I decided to lift the entire image in favor of pushing the shadows more alone. I tend to process dark, so this was a bold move for me. I did saturate the blue just a little to bring some color back. I am always a bit afraid my end result will be too fake. I need to get braver about localized adjustments in that way as well.

You maybe are much closer to where they fish than I am, but I would say the majority of the time I can’t actually see if they got the fish unless it’s pretty big. I’m on the Mississippi which is fairly wide here. I have to tell either by behaviors or from what my camera saw. It seems like if they made an attempt and are slow gaining height again or head off to the trees, they have something. If they just circle back, it was likely a fail. I miss the ice, because they’ve really dispersed. I have seen a chase a couple of times. That was exciting. The last time the fish got dropped and neither of them got it. Alas, it was too far to get anything out of the images other than for me to see what happened.

@Robena.Sirett I actually considered if I should try to lighten the fish on the branch just a little to draw more attention to it. I might play with that as well as enhancing the yellows a little. Thanks for your comments!

They are fabulous to watch aren’t they? Even though I now live in the land of eagles, I usually stop to look or if I can’t just say “oh look, an eagle!” even if there’s no one around. I have several nests I visit, mostly in the kayak since they nest in high trees near water most of the time. Can’t remember the last time I saw one with a fish, but I see plenty on roadkill, that’s for sure.