Low backlight and a bit of editing to darken the background.
I also made a version with the spider web cloned out; not sure which one I like best…

Please do not critique this image. Galleries are for sharing and discussion only. 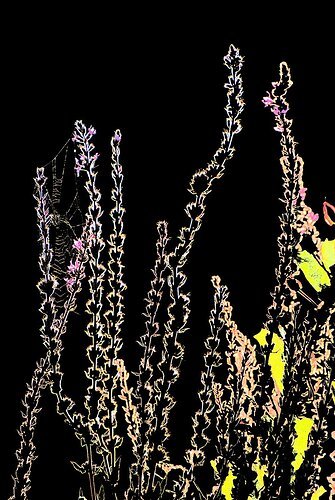 Han: Wonderful lighting. I like the web. One small presentation point; since so much of your frame is black you might consider a one or two pixel white stroke on the border to separate it from the site BG. In the larger versions the edge of the frame is indistinguishable. >=))>

This is fantastic - and I sort of like the spider web.

Thanks Bill, for the comment, and the advice wrt to the site BG.
I didn’t think of the separation from the BG, while the frame is really black (RGB 0,0,0) and on my (calibrated) monitor the BG of the site is grey with a blueish cast. If you can’t separate the picture from the BG I think that your monitor is a bit dark. But you still have a point that adding a narrow white border is a good idea.

I vote for the spider web to stay in. In fact, do you have another frame highlighting the web? Think the web with just five or six stems from that area would make another striking image.

@Patricia_Brundage: no, I don’t have another frame with just the web. But your are right, could have been a nice image…