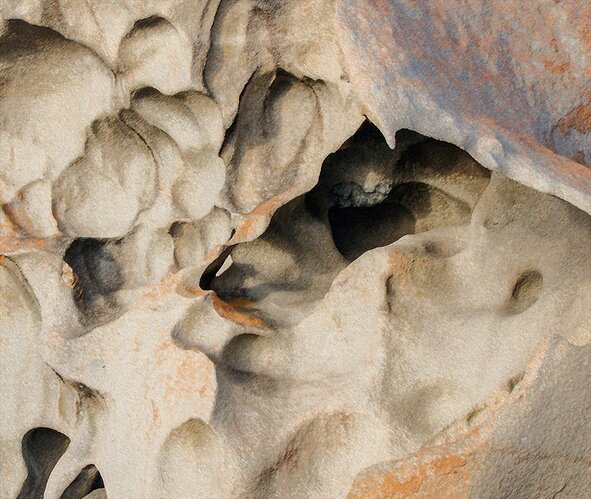 The Remarkable Rocks are on Kangaroo Island off the coast of South Australia. After taking several photos that were much the same as everybody I decided to come in closer and I could just discern an image of a face. It reminded me of a cubism painting. The light was soft towards evening and I have cropped the image.

Generally do people see what I saw. Is the black in the middle distracting and the blue in the TRC leave it or get rid of it. Would this work as a BW image

If you tried to get rid of the bluish part you’d cut into the face, which I see clearly. I think of this as a blue turban. The black in the LLC is more distracting to me - I think you could cut off the left side to make a square crop, with more or less just the head remaining. The formation is fascinating and the colours are great. The large black part is like a Phantom mask - doesn’t distract me at all. 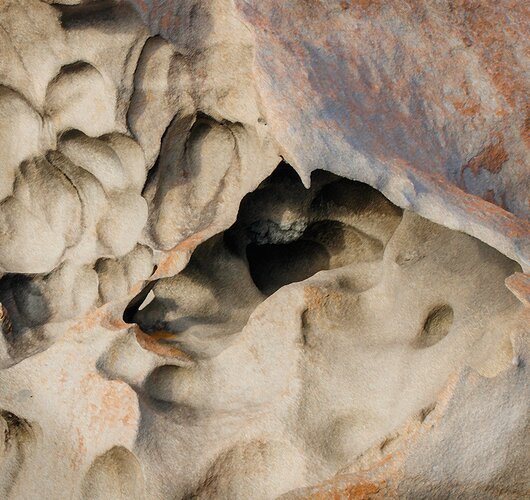 Fascinating image David! I love all the shapes and vague sense of scale. The blue on the upper right complements the earthy colors especially the orange. I enjoyed exploring around the frame. I agree with Mike regarding the dark area in the lower left corner and a crop is probably warranted. In your cropped version, may I suggest including a bit more of the left side if possible so that the one shadow area is not near the edge? Wonderful image regardless!

Another mind bender for sure! And quite honestly, I’m missing the face. I don’t see it. So it just goes to show, we don’t all “see” the same things. It probably has plenty to do with not having stood where you were standing and also taking in all the surrounding rock and environment that can’t be shown in a single image.

I keep looking, but not seeing a face. I do however, see a creature standing on a rock - and it’s more obvious if you were to rotate this 90deg cw. The darker, central shapes anchor everything. And to me, the larger rock in the UR corner (with the blues) is the most non-abstract part of the scene and it feels top-heavy, which would be another reason to rotate this. But then again, if one sees a face and you rotate this, that impression may be lost… so in the end, it’s just an alternatie view.

Even as presented or rotated, I’m not so much bothered by the darker shapre in the current LLC. There is enough of it to warrant keeping, but I do understand that cropping/cloning it away might not hurt anything.

This is a fine abstract and truly is an abstract. To me the bluish wedge in the upper right corner is dissonant with the remaining image. It feels like it doesn’t belong. I’m not sure if that’s due to the blue color or the dominant shape. I would convert the blues to warm tones for a start and go from there.

The deep black is part of what makes this image interesting. It really gets your attention. So I would feel good about that.

Have you considered turning this 90 degrees counterclockwise?