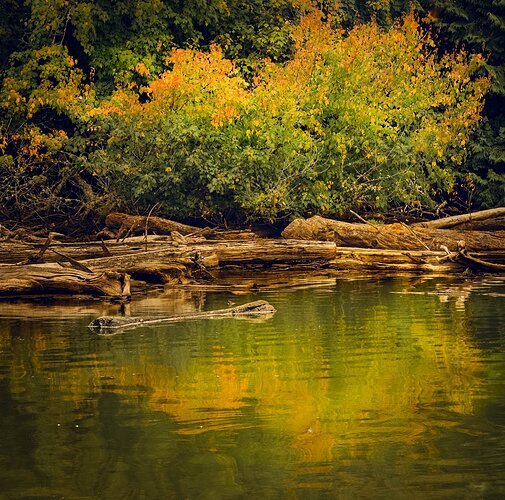 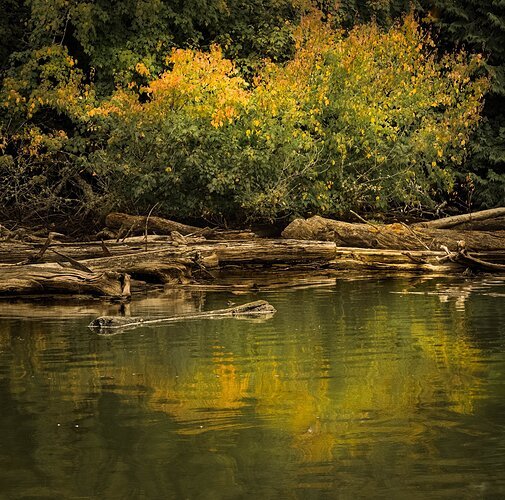 On the forested side of a tidal lagoon on the north edge of the Olympic Peninsula in Washington state, I ran into this maple displaying its colors in August. Had to look it up to give it a name. I was after an image of reflections and this little clump of maple helped out a lot. Originally the logs were bleached white, but they turned out to have decent color when burned.

The logs and forest extended quite a bit left and right in the original exposure. They give the scene some context and relaxation, but this crop is more focused on the tree and its reflection.
All comments are valued.

This looks like many a bank where I have paddled. Messy, but following a pattern with order and method. The colors are rich and complementary. Makes me think of nature working quietly and indifferently to humans. I’d like to see a bit wider tonal range - things feel a little muted. Maybe let the logs off the leash a bit?

Actually, I did mute this down from its earlier saturation and brightness levels. The re-post is with colors amped up with Man from Mars Method. Thanks greatly, I like the change.

It’s also kind of neat that you were able to incorporate fall foliage with the ocean.

Yep, I noticed that after I posted. Changed now in my library, and much more appealing.