In 2013, I was camping in a quiet spot in the eastern Sierra. This cloud had been hanging out in this spot since early afternoon. Earlier, it was a single spout shape going straight up and did not move for hours. As evening approached, it split and spread out. I was up on a ridge above my campsite. The wind was blowing so hard, I had my tripod legs at their shortest and I still had to hold onto it to keep it from being blown over and I had to be careful moving around or the wind would have knocked me down. This cloud was in front of me and another space ship-shaped cloud was behind me. It was the best cloud display I have ever seen. 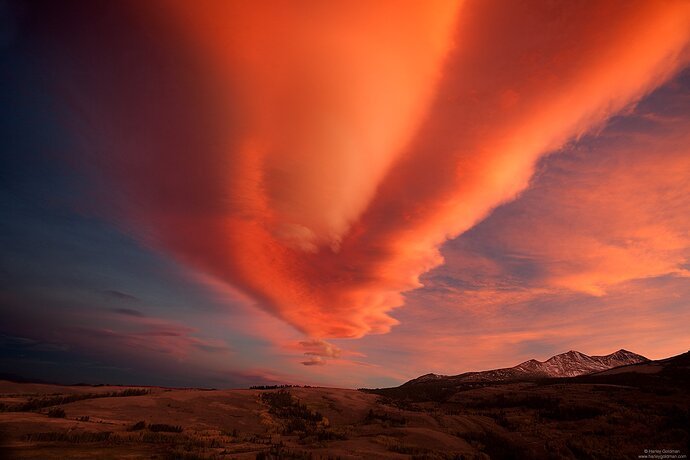 Hi Harley, Wow, what a jaw dropping event that must have been. Amazing colours and textures in the clouds. I also like how the lights hitting the mountains in the background. The only thing I would change would be to bring up the shadows a little of the clouds on the left side.

Wow, is right, Harley. One of those captures that makes me wish I had been there to witness it! Gorgeous colors.

What an amazing experience this must have been! Beautiful colors and great capture. I would love to have been there.

WOW, this one is really LOUD, Harley. I’m not sure I recall this one from the past. Gosh, you show 2013 and a digital image. Time sure flew by as I thought this was a film take from that date. Anyway, a truly wonderful image not matter what the media…

What an amazing experience and capture, looking down the body of this standing wave. North winds whipping up the eastern slope of the Sierra can create some wonderful lenticulars, but this looks like it may have been a record-setting one.

A once in a lifetime, never to be forgotten shot and experience. I have to say it was worth it. This is phenomenal.

Harley, this is a very dramatic and beautiful view. Was the wind was blowing right at you or was it from the right?

Thanks for the comments and the suggestion, @AndreDonawa , @linda_mellor , @Steve_Kennedy , @Paul_Breitkreuz , @Diane_Miller , @Chris_Baird and @Mark_Seaver . Mark, it was 9 years ago, but I seem to recall the wind was blowing right at me. It seems that was direction from which it was trying to knock me over.