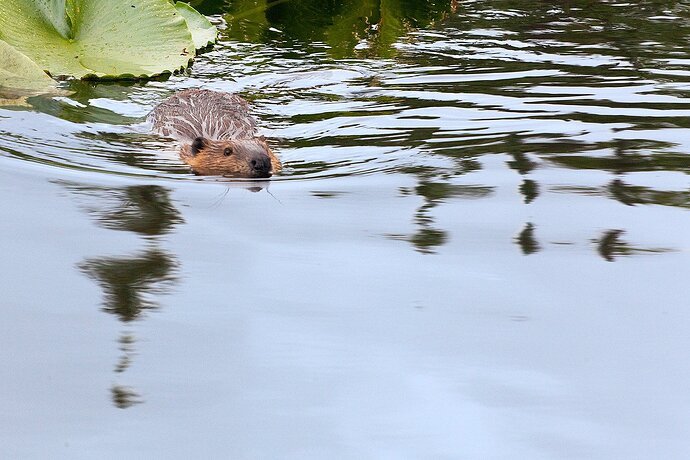 While scouting Skookum Lake, near Sterling on the Kenai Peninsula in Alaska, I encountered this individual beaver and interrupted his daily routine. This fellow spent a lot of time patrolling the nearby shore and slapping his tail to express his displeasure as well as to signal danger to his extended family.
North American beavers (Castor canadensis) are found throughout all of North America except for the northern regions of Canada and the deserts of the southern United States and Mexico. They are the largest rodents in North America, and they spend most of their time in the water. Beavers are primarily nocturnal. They are only occasionally seen during the day, usually around dusk. To protect themselves from the cold and wetness they have waterproof reddish brown or blackish brown hair.

Thank you for sharing that information about the Beaver, Bob. I did not know a good bit of that info, so that is much appreciated. I love the way he has his eye on you. Very nice.

Thank you, Shirley. Wildlife photography is much like portrait photography. The more the photographer knows about the subject—habitat, behavior etc.—the greater likelihood of capturing them at their best. Beavers are prey animals and are very aware of all forms of potential threat, hence the look. It is always fleeting so one must anticipate it.