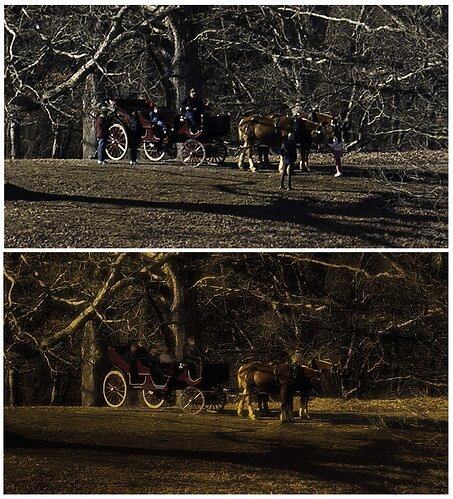 The top image is one of the landscape images I captured while at the Biltmore Estate in Asheville, NC last month.
The main attraction for me was the carriage, horses and the people.
That scene is rather boring except for the carriage so I felt like a bit of contrast and saturation would help it out a little.
I feel that grand scenes like iconic mountains or mountain ranges rarely need any help in the way of contrast or saturation (other than corrections) , however, scenes like this need a little help IMHO.

I used to do a lot of work for a local artist (one that used real paint and canvas) but he was not able to paint from visions in his head, he could only recreate what he saw from a photo or other art so he hired me often to create scenes he described and by using photographs that I put together in the form of composites, as well as hand painting using photoshop tools (using the original version of Photoshop). Some of my old work had as many as 300 layers.
My photo art skills have been dormant for many years so I decided to try and wake them up on this image, yeah, they’re still not awake.

Actually, this wasn’t the best image to work on, it needed to be a path with the carriage headed towards an old farm style house but this was good enough until I can put together a better scene.
Also, the base image was really taken during the wrong time of day for the best light transformations into the second image.

The second image is actually a composite but only the people in the carriage, and the results of that can be seen in the over/under comparison image (third image).

The people are from my archives, they are from photoshoots I did at horse shows long ago.

There were many processes to get the second image to where it’s at and it may be too long to explain in detail here but I will if anyone is interested in knowing.

Personally, I enjoy creating photo art in this way, it is my only way of doing so since I can’t use an actual paint brush and real canvas in any meaningful way. I like this image but it really falls short of what was my “Usual” work, hopefully I can be better than I used to be with modern Ps and Lr tools.
Basically, I just want to know what you think of the overall appearance and I was just wanting to share the technique so others may be able to envision their own potential scenes.

Edit: I just noticed that the compression from uploading to NPN really dampening the effects quite a bit compared to the original. (it was 2.2 MB but now compressed to 826KB)

Marvin, I am in complete AWE of what you did with this image. First off, the whole scene is so much more impactful and emotional after processing. I appreciate that you posted the initial image to compare. The result is absolutely amazing.

And thanks for posting the closeup of the horses and carriage. The work on that is incredible. So seamless. I have been a Photoshop user since version 3.0, but have moved on to Affinity Photo since I don’t do much with pixel based apps. I stay in Capture One for most all of my processing. But this work may lead me to investigate PS again.

Wow, what a phenomenol effort on the re-make. I’ve looked a few times now and I finally realized something. At first, i’m asking how could one “create light” when there was none? Then finally it’s not that you created light, but you selectively removed it. Of course many other things with color and such, but wow, what a transformation. Thank you so much for sharing most the details.

The main attraction for me was the carriage, horses and the people.

I would like to here your thoughts on this. My thought is, if the carraige/people are the attraction, why are the relegated to the far left? Why not move the carraige to the more prominent light-filled location right of center? I’m sure this speaks to “I was there” and your personal connection to the scene, and perhaps your history with the location and your past work. That is of course your personal reference and is how it should be. But being emotionally and physically removed from the process and creation, I might want that carraige in the opening there.

Great job with this!

Your mentioning how it dawned on you that I removed light rather than adding light reminded me of my studies for my air conditioning license, I had a really hard time understanding how to make something cold. It finally sunk in that you don’t make something cold, simply remove the heat which leaves it cold (whatever it is), Understanding that cold is relative and heat is energy wasn’t so obvious to me at the time.

When I was there taking the shot I was only trying for a decent shot of the scene, I didn’t have anything like this in mind at the time. This was an after thought.
With the scene being lit up the way it is in the first image, it made sense to place the carriage at the beginning of the wagon trail (the beginning of the left side of the scene).
If the carriage were in the area right of center where the light is most prominent in the second image, then the left side becomes almost useless or uninteresting for the most part.

However, I clearly see your point, and you’re right!, there does need to be something there and I’m thinking that I should put another carriage there, maybe a sort of utility style carriage made for work crews, tools and materials.

I really appreciate your thoughts and perspective on this! I will be searching through some of my archives in the morning to see if I can find anything of use, maybe at least something I can use as a guide for scale so I can do some hand painting.

Thanks for all the words of encouragement as well!

I have been a Photoshop user since version 3.0, but have moved on to Affinity Photo since I don’t do much with pixel based apps. I stay in Capture One for most all of my processing.

I had to investigate what Affinity Photo and Capture One is all about and how they compare to Ps and Lr. I see so far that they are pretty versatile but I need to spend more time studying the differences before I form any personal opinions.
They do seem to have most of the same type of tools as Adobe though, so I wonder if custom work and hand painted work can’t be done with your preferred tools as well?

Thank you so much for taking the time to make such kind comments and words of encouragement, David!