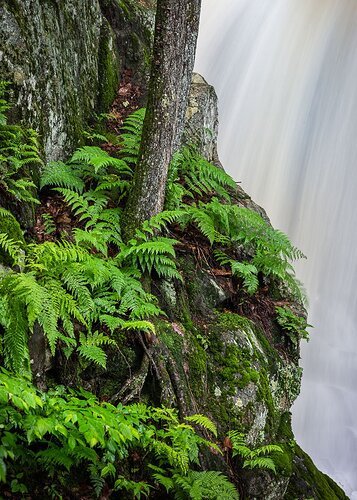 Shot showing water flow, Area 1 is the above shot, area 2 is the background (with high water) 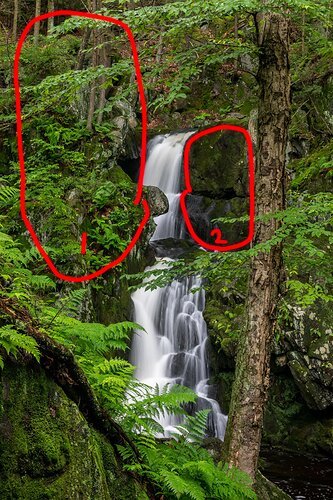 The more “classic” view of the waterfall. 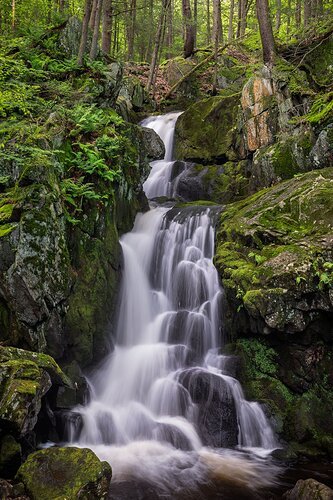 The month of July 2021 was the rainiest July on record in Massachusetts. It gave me a good chance to get out and do some extended sessions of waterfall photography, although I’m just now getting around to processing these images. It was raining during the 90 minute drive to this location. But by the time I got there, it was a total downpour, and I had to sit in my car for over an hour until it let it up into a lighter rain again.

This waterfall is in a narrow and very steep gorge, so the several inches of rain had created a flow of water that was so high that it made it impossible to get any traditional portrait type shot of the falls that had any texture in the water. Rather than giving up and heading home, I decided to try some non-traditional approaches. I was very impressed by this tree and the ferns clinging tenaciously to the steep side of the gorge. So I decided to use the flowing water as a background, rather than the main subject. From this angle of view, under normal conditions there is no water in the background. For a normal portrait of the waterfall, you have to stand well to the right of this, where you can get the falls in the center between both sides of the gorge.

Does the white water work for you as a background?

Yes, Ed, the white water background does work for me. Mainly because it isn’t too bright and also adds a nice soft vertical texture which, at least for me, helps to define the rock and ferns. Nicely done.

Not only is the tree tenacious but you as well to get this shot. Really like the the falls as a background and agree with @linda_mellor that it helps define the ledge. The diagonal is strong and I think really makes the composition strong. Always a sucker for ferns…

Works just fine for me, Ed. The water has enough texture to be interesting and I like the faint hint of rocks toward the LRC. Of course the lush green ferns are lovely as is the moss covered areas of rock. The verticals of the waterfall, tree and the cliff face all work beautifully together as well as the vertical presentation. I also like the way you let the tree merge a little with the rocks so as not to allow the water to show between them.This is a very unique and different take on waterfall photography. I am really enjoying what you put together here; no suggestions from me.

This composition works really well for me. It actually brings to mind a scene from The Mission where DeNiro climbs this enormous waterfall in the Amazon. The scene is composed in this same manner.

Hi Ed, I think it’s a really neat perspective. I think it would make a good series of images. Like if you had one with the whole waterfall landscape and this one and then maybe another small scene. If you were to showcase it on a wall or something. Just my thoughts, as I think it would give the viewer more context. Nice capture!

I like very much images that have flowing water (or waterfalls) as background. There are some classic photos out there with a blooming tree as the main subject. I think your image take this further, and in my opinion it works very well.

The water certainly works here and I’ve done similar things, but on a smaller scale - with one fern as opposed to many. As a slice it’s really good - the sharp delineation between the foreground and water is a bit of an eye-magnet since it’s so crisp, but the contrast with the motion of the water and the stillness of the ferns is nice. Often hard to do since the air coming off the water moves them, but in this case the rock itself probably shields them. Super job and I’m glad you can take advantage of the deluge.

The white water as a background works for me as well. The touch of yellow in it works well with the green ferns and moss.

thanks to all of you for your comments, sorry for the delay in replying, but i have been tied up with something the past few days. I thought the water as background worked okay, I’m glad to get consensus confirmation on that.

Hi Ed, I think it’s a really neat perspective. I think it would make a good series of images. Like if you had one with the whole waterfall landscape and this one and then maybe another small scene.

With normal water flow, there are a lot of composition possibilities at this waterfall, and I have been here a number of times, and have tried a lot. To provide some context, I’ve decided to post some other versions of this same falls, back up with the original for comparison. The first one is nothing special, but I have circled in red where the posted shot came from (1), and where the background is (2). This shot was taken a few weeks later, when the water level had gone down to the point where the “background” was all rock and no water. The 2nd image shows the more “classic” view of this falls in normal water flow (it’s nothing special). The day I took the posted shot, there was so much water none of the rocks in the channel were visible, and the upper tier had water all the way across.

First off Ed, Kudos to you to actually visualize this scene after arriving and finding you were not able to shoot this as you normally would have. Very creative thinking for sure. On top of that, this intimate scene is so much more enjoyable than the “Typical” scene you show in this post. To answer your question, “does it work,” oh boy, does it ever. This is not just another waterfall scene. This is brilliant given what you were up against. The very sharp nature of the left side of the image juxtaposes the soft, yet meaningful, right side of the image in both texture and luminosity. It also gives a good idea of what these survivors have to go through on a daily basis. Your title is perfect!