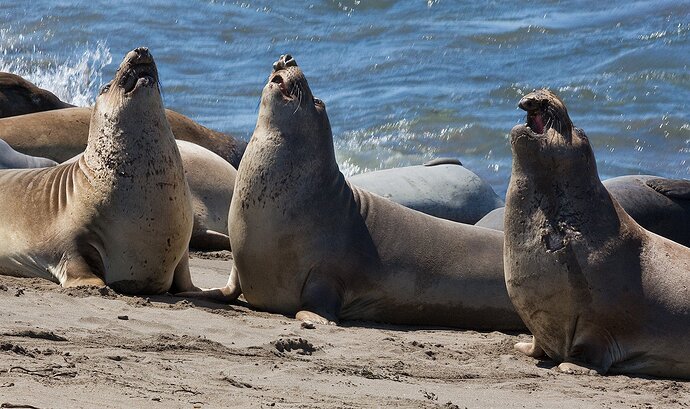 Three subadult male northern elephant seals (Mirounga angustirostris) on Piedras Blancas beach near San Simeon, California. These young bulls, 3–5 years old, appear to be serenading. They were, indeed, vocalizing but not to the cows. A new study suggests they memorize the rhythm and pitch of individual vocal calls in order to recognize one another. Only moments before this image, the three were engaged in fighting amongst themselves, a non-lethal form of combat they use to determine the heirarchy within the colony of their haulout.
During breeding season, between December and March, elephant seals take a break from their lives at sea and congregate on the West Coast from San Francisco to Mexico. The males, called bulls, arrive first and fight to establish dominance. As they battle, the male elephant seals call out in rhythmic clicks or grunts that announce their identities. These voices are always the same, remaining stable year to year. Even young males, like the ones pictured here, not yet ready to breed arrive at the colony to start learning its social network. Knowing the ranks of your male colony mates is important for survival. Competing for females, the males fight very violently, even to the point of killing one another. So it’s very important for them to accurately recognize the voices. An easily avoided fight can mean life or death for the seal.

I know this spot well and usually stop when we’re in the area. I remember when the big walkway wasn’t there and you could walk out among the seals, something I’ve only done once and with out the bulls present. The light is always awful, but I can never resist shots like this either. I like it.