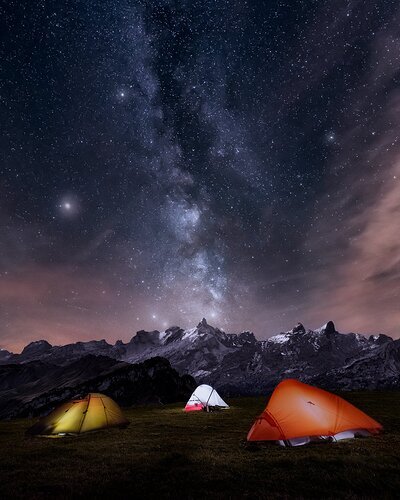 This could be called as many other milky way shots with tents – Million star hotel. I like to call the shot „Three friends“. Truth to be told, we were 4 on this photography trip and two of us had the privilege to compete in snoring exhibition in one tent. Unfortunately, I suck in the field to create interesting composition so I was a bit creative in the postprocess to create a picture I failed to photograph.

Story behind the shot:
All shots were shot in Landscape orientation and there was too much dead space and almost no interest, so I decided to rework the scene. I realized that Portrait orientation will work much better - moved the tents closer together to get rid of dead space. Than I took mountains from blue hour shot to add a middle ground point of interest and finally, I added Milky way. All shots were captured from almost the same spot and I believe that this image could be created directly in the field. But because this was one of my first “true” phototrips and I was blown away by the Milky way, I simply did not realize that MW is only a topping and I am missing the cake and I totally lacked the vision of what I really want to capture