Titel unknown at the moment

I am lost in the final stages of editing this afternoon/softligt storm scene and looking for guidance. Obviously I have shot it so the front is out of focus. Cant decide if I should crop it out? The other issue is the light it self, do I need to enhance it some where, and/or dim it else where?

Besides the above I am open for all other critique you can think of.

Hey Mattias, I don’t mind the out of focus foreground, it creates a bit of depth and Isolates the main subject. I would include the top of the spray in the crop if possible thou.

That was going to be my suggestion as well.

There is also very little color to this image. I would perhaps cool the WB or better yet, go with B&W and crank up the contrast. Move the white point further to the right.

The image also feels cramped on the right a bit. It feels as though the center of focus is near the right edge somehow.

Mattias, to me what is exciting about this image is more the spray than the rocks. While I don’t have a major problem with the foreground rock being out of focus, I’m not sure it adds anything to the story. To me this image should be about capturing the action of the spray, and not creating a sense of depth. As @Blake_Randall said, I would prefer to not see the spray cut off at the top. As @Igor_Doncov suggested, increasing the white point would give the spray more vitality. The water also feels a bit dark to me as well.

Thank you all. Some images are just not ment to be I guess. Also I identified the cut off splash as an issue among several. I finally made the following edits. 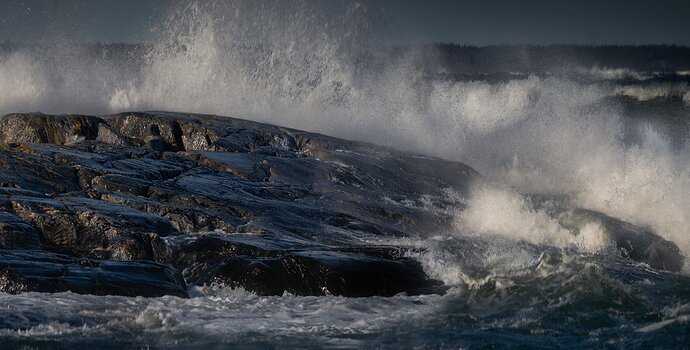 Oh, the repost is much better. I think the first was too dark as it was hard to pick out and enjoy the details in the rock. It also felt cramped as others had mentioned.

This second version is much better in terms of being able to enjoy the details throughout; color, exposure, etc. very good. Yes, still would like to see the top of the splashing wave, but with this version, there is much more to enjoy and so don’t have to rely on the top of the splash. Hope that makes sense.