Any feedback, opinions or critiques are very much appreciated 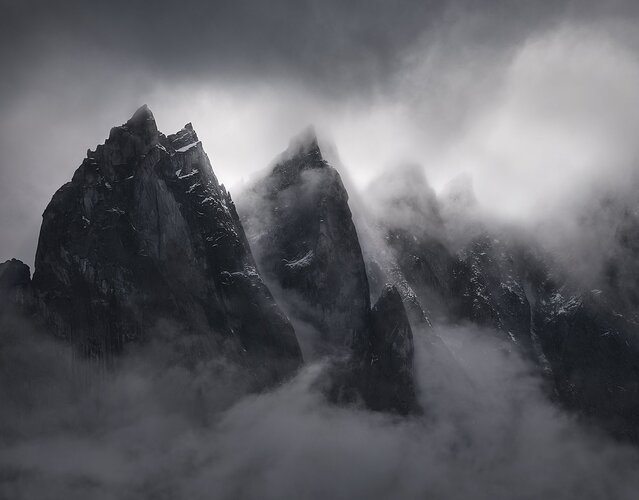 Beautiful, Blake. What a rugged look and such a great mood from the fog. Very high impact image. No suggestions here.

Great drama and impact as Harley commented. I love how the clouds/fog enshroud the rugged peaks.

My only suggestion might be to boost the contrast a bit; especially in the rock. But that’s minor.

Powerful image, Blake. The wrap around clouds make for some great framing. Processing looks spot-on to me. I don’t think I’d change a thing. Great work.

Blake: dramatic and grand certainly come to mind when viewing your photo. A most minor suggestion would be to burn the left most peak just a bit to bring up some detail. Richard

Gorgeous moment captured here. Like others, I can’t really think of much that I’d do differently. There’s a nice progression from dark to light across the frame and that little bit of fog obscured rock right on the right edge breaks the progression. Perhaps cropping just the very edge of the right side would give a little more directional interest.

Wow. This certainly is dramatic. Hall of the Mountain King. You certainly hit the right conditions. Don’t know what to suggest without trying it out. I would think that raising the tones in the fog below the mountain just a tad and increasing it’s contrast might give good results. That would probably require luminosity masks.

Another thing you could play around with here (which you’ve probably already done) is cropping. Sometimes, cropping is just treated as a tool for removing unwanted elements. But aspect ratio has a big effect of the feeling of an image. For me, the shape of the mountains give a vertical feeling to the shot. The almost square crop blunts that feeling. My eye is being drawn down into the lighter fog/clouds. I see a definite diagonal line from the mountain tops in the upper left going down and right. I would bring a crop in from the right and either show more on the bottom (if the original capture has something there) or vertically stretch the bottom clouds.

@Igor_Doncov Thanks Igor, Hall of the mountain King would be a great name for this image!

@Dan_Hawk @Rick_Alway Thanks guys, the crop is something I struggled with. I got a fair bit of room to play around with as it was shot at my lens max. Here is the original. 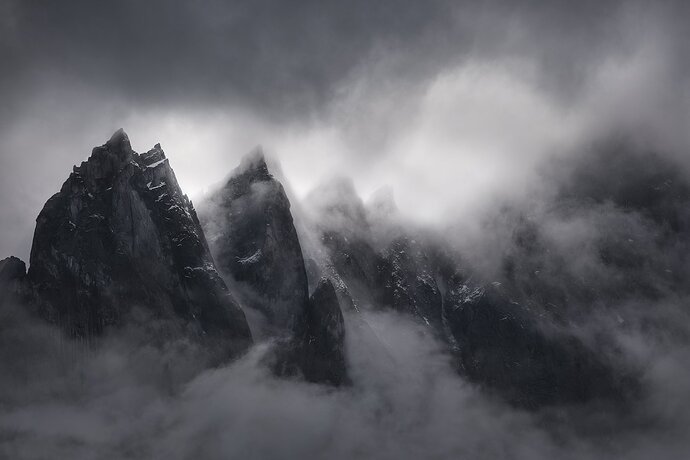 Lots of atmosphere. Love how the jagged edges contrasts with the clouds.