I purchased some tulips several weeks ago and I immediately noticed this particular one because of the way the green foliage was wrapped around the bud. I took it into my studio and just began watching it for a couple of weeks, fascinated by how it was evolving.
I have several questions for the group: 1) does this work as a series, 2) Is it a triptych? With 4 images?, 3) does it tell a story? I tried to keep the lighting the same, but as it began to fade the colors changed also, does it look consistent/believable as a single tulip?
Love to hear your thoughts and comments.
All are studio shots using a tripod, remote release, studio lighting and macro lens (105mm). Second image from the left is a 7 image stacked.
Nikon Z6ii, various setting: f/10 to f/13, 2.5 sec. to 1 sec., iso100 to 200.

Linda, this is so cool. Yes it tells a story of the beginning and end of life. What a terrific sequence. It certainly works as a series from my viewpoint. Triptych? Who cares. The four work together as a whole so there.

This would make a great print, Linda.

Thanks, @David_Bostock. It was certainly fun to watch it develop.

Great idea for a project Linda. Looks like you managed to get lots of good detail with your focus stack. I think it works well as a series. I think it all depends on how you chose to display them. Especially if you decide to go to print. If there are 4 images I believe they are called a tetraptych. Yes, the story is clear and the tulip looks believable.

I like that you included a withered variant as well as the vibrant. Dedication to one’s craft! I’ve been meaning to do a little macro studio work with some very tiny wildflowers (what most people call weeds) so you’ve inspired me! I wish that one of these had the leaves as well since there is the one you do have to complement it.

Thanks so much, @AndreDonawa and @Kris_Smith. Must admit, Andre, I’ve not come across “tetraptych” before, good to know. Kris, yes the original of the third image does include a bit more leaf which I cropped out to have it conform to the rest of the series. This is it uncropped: 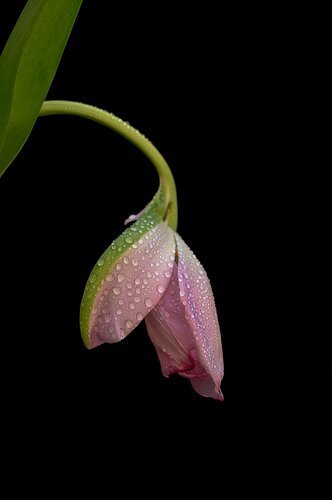 Though I like the series as a whole, the story would be better told as a triptych involving the right three pieces. To me, the story regards the tulip’s life, from its prime to its death, which is quite beautiful yet sad. The lefthand piece, while providing some context, does not do much to add to this story.

My other suggestion, as learned from @Jack_Graham, is to avoid elements coming out from the corners of the frame. This is especially prevalent in the second photograph; even if you do not have any additional room in the file to re-crop, you could pull some Photoshop “magic” and add an inch or so of black to the left side to negate this occurrence. This would not work as well with the third piece, however, due to the leaf itself being in the way.

Finally, if you are to do a triptych, it would be advised you keep the cropping the same throughout. This especially if you plan to print and hang them, for consistency’s sake.

Thanks, @Cody_Schultz, for taking the time to look and comment. I appreciate your perspective and suggestions. All of which I’ll keep in mind for future images and for a re-work of this tulip.

Thank you, @Kris_Smith for the EP. Very special distinction for me.

It is well deserved!

I just now found this and have to add congratulations – a very nice idea and very well done!! I think this would be most effective as a triptych of the first three, and that you could get away with the center piece being a wider format than the end pieces, but the end pieces should match and balance one another in composition and visual weight.

tulip-combined.v22000×714 131 KB
Thanks so much, @Diane_Miller. I did do a re-work, posted here, based on some of @Cody_Schultz’s suggestions. I do like your idea of making the center image more of the focal point and reducing the size of the end pieces. Definitely keep that in mind for the next triptych as I don’t think that will work here because of the compositions I’ve created. Thanks again.
1 Like
© Nature Photographers Network
Privacy Policy