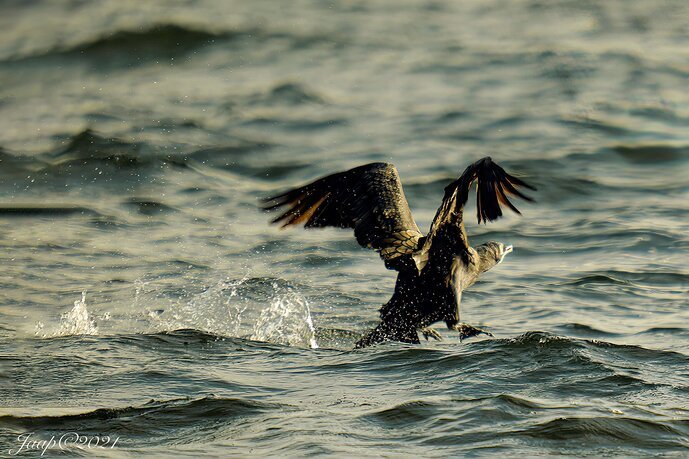 I was photographing Cormorants sitting on poles, which, in retrospect resulted in rather boring cliche shots, when one took off. I managed a grab burst.

Print or bin? I can list about a dozen technical flaws, but I also have a feeling that these flaws convey the power of the bird taking off from rough water against force 8 wind.

Not boring goes a long way. I like that the entire bird it out of the water. Having just watched cormorants take off from the water, I can attest to all the flapping and splashing. It’s fun to watch and the angle on this suggests escape. Probably it would work best with a group of cormorant or other waterbird photos. The light is pretty terrific and the water droplets show up beautifully. Don’t bin it, but don’t enter it into any contests.

Definitely a keeper. The enlargement shows great detail in the water and his feet show well. I think a little could be cropped from the top, to center the bird more and lose the dark wave in the UL. Is it possible to pull out more detail in the darks?