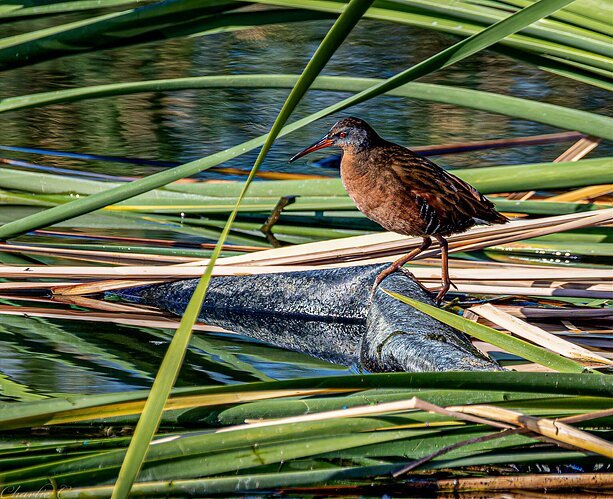 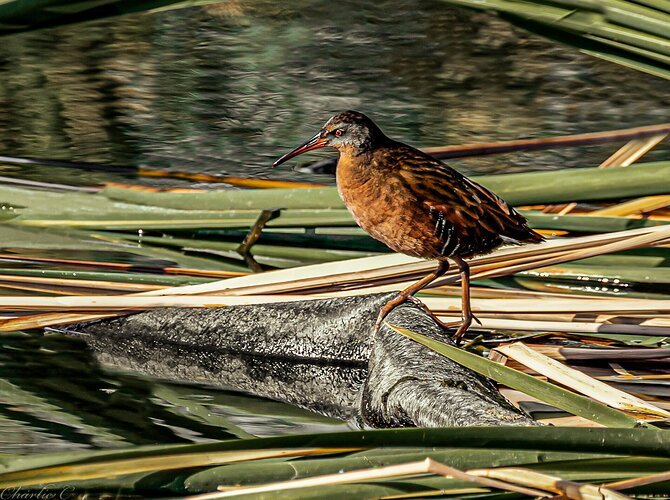 The ever elusive Rail popped out for about a minute and then flew off to hide in the reeds again. This is the first one I have seen in the open. Usually hidden back in the reeds.
I did remove two reeds in PS that were over his head, just distracting. Otherwise, all adjustments made in LR. Cropped 50%.

I wanted to repost this after going through Topaz AI. I think the detail is better. As you can see in the first image, I removed some reeds close to the Rail. I tried to send the PSD version to TopazAI, but it does not support PSD. Only PNG, Tiff or JPEG. So I thought I would see what you thought without removing the reeds and just adding the sharpening. I have probably reached my limit of trying to get a smaller bird to be large in the frame. This is actually an 80% crop.

Nice to catch one of these out in the open, Charlie. You did a good job on the exposure, but the bird looks rather soft to my eye. I like the way those reeds come in from both sides at the top-it looks like a roof. I’ve been trying to figure out what it’s standing on-any ideas?

Thanks. I think removing the shadows on the back lost some detail. This was taken at a water treatment plant. The reeds were recently cut back and it appears that it was a fairly large machine. It’s possible that there are liners that cover the bottoms to keep the water in and it was disturbed. I really am not sure. Just a guess.

Thanks, Charlie. Just curious. I like the line it forms.

Color and pose are generally really good. I do think the image is a little soft as Dennis states. But this is a fairly unusual bird to find and they are quite timid.

Nice to get a rail out in the open. A little soft, but the colors and pose are nice and the foliage shows it’s typical environment.