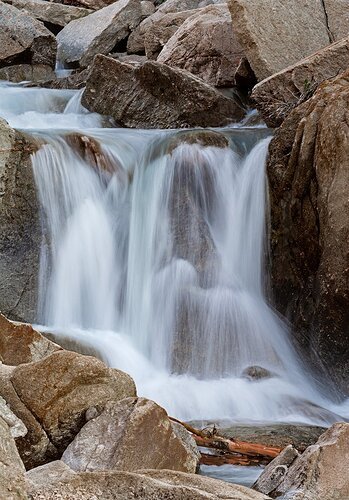 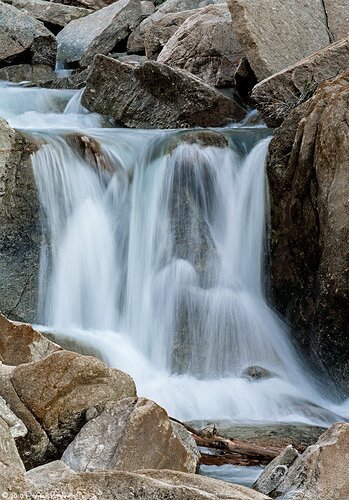 Late afternoon at the falls during our recent trip to the Sonora Pass country. I decided to focus on the conflict between water and rock with this image. So, here’s the question…

Over the eons, which one wins; the flowing water, or the long, slow uplift of new rock?

Your thoughts are always appreciated.

Wow. That water is handled perfectly. It looks like it feels. I don’t think that can be done much better without resorting to heavy processing. Some suggestions:

These are all minor things because it’s all about the water.

I agree with @Igor_Doncov (ehem I have had my coffee) about the orange log. That’s the first thing I notice in the image. Cropping a smidgen off the top will clean it up better but it’s not a big deal for me.

Wow, great job isolating this little section of the cascades running thru this mini granite chute. I think you’ve done well to capture and depict that relationship between the solid granite and cutting water. (to your question in a minute…)

Agree with Igor, the shutter speed and capture of the water is right on. Texture, detail AND flow all in one frame.

Very little to suggest, but have a couple things. I do know there was some extra “debris” nearby which I think limited what you could show below and perhaps to the right; also more granite boulders in the way to the left… but if anything I’m wishing for a tad more room to the left. But that’s pretty minor. Also, rather than crop the top, I think all you need to do is burn/tone the flat surface of the one rock up top and that should take care of it.

Ok, now given the respect I have for your deep knowledge of the Sierra Nevada and it’s geological history AND for all that you have taught me… I suspect you have an answer to your question already…

I won’t pretend to know the answer. Can I say, Which came first, the chicken or the egg? Ultimately, given enough time (Key factor), water wins. Water dug many canyons, eroded and shaped many volcanic rock; but valleys were most often shaped by glaciers (water too!). But granite was uplifted too and so many more recent changes to the Sierra are from displacement, uplift and plate tectonics… so maybe granite wins there?

Am I close master?

I suppose that depends on the definition of win

. It is a nice illustration of the circle of life.

I like how the photo captures the questions; The solid granite confines and frames the flowing water.

I have looked at this 4 or 5 times and could not quite figure out what was throwing me off. I flipped the thought process and asked what works for me and that is the waterfall and water pattern. I pulled it into PS and played with various crops and I quite like this one. As always, YMMV. 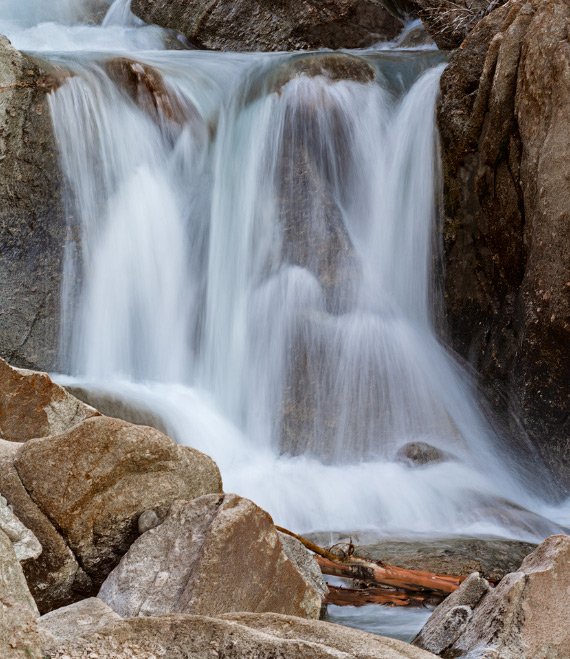 Water always wins (at least according to the geologists), if it didn’t the earth would have mountains as tall as Olympus Mons on Mars (72,000 ft). This is a fine view that really shows off the water beautifully. For me, the difference between your post and Harley’s redo lies in the story. The rocks at the top balance the amount of rock and water nicely, while Harley’s version strongly emphasizes the water.

Preston, I like the original presentation, and can’t think of anything to improve it.

The answer to your question, who wins water or rock question, can be found at the Grand Canyon…

Thanks for your comments everyone.

I have added a re-worked version below the OP.

You could apply a vignette to darken all the surrounding rocks and make the water appear more prominent. Somehow I don’t think that’s your style. I’ve never done it to my images but I tried it here and I rather like it. But, I do think the rocks are a bit bright all around. 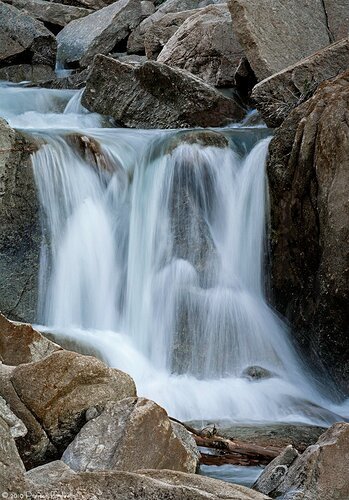 I like @Igor_Doncov 's direction. It accomplishes your rock/water goal and highlights the falls.

Thanks, @Harley_Goldman and @Igor_Doncov . I did make the granite in the rework a bit darker. I appreciate Igor’s idea, but I did not want the low values to lose too much detail.
-P