What to do with an amazing foreground in a grand landscape? 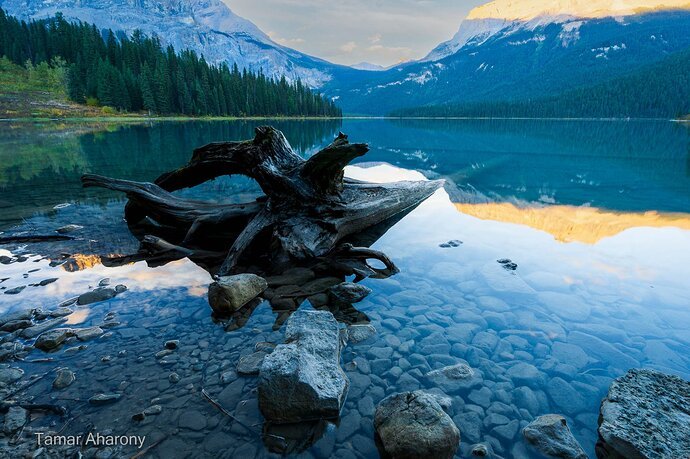 This is another picture from my workshop in the Canadian Rockies this Last fall. I found this beautiful dead branch looking like a sculpture in a great placement on the lake. Then I tried really hard to find a compelling composition with it. My initial vision was that the branch will point to either the valley or the side of the right mountain but no matter how or where I moved to, I couldn’t make it happen. so I tried to have the viewer have a more complicated route from the three rocks to the branch to the reflection and from there to the valley but I am not sure if I was able to get it.

I would love feedback on the composition - if you have any advice how to approach such a situation and whether it is maybe better to include less (like without the top brighter part or even some of the right). In addition I would love any post processing feedback as I fumbled with this one quite a bit and I wasn’t sure how much and what to dodge and burn different areas.

This is a tough one Tamar. You did good with what you had available. Sounds like your thinking was in the right place in how you envisioned incorporating it in to a composition. Here are a couple of thoughts that struck me when viewing the shot…

This is a tough situation. I think you did a great job with what you had to work with.

Beautiful shot and interesting subject. It’s hard for me to judge because I cant see the whole scene but I think I would have included the mountains. They look like they are catching some nice light and it would connect the foreground reflection with the background.

I think an important thing to keep in mind when composing an image is edge control. Generally a bright eye catching subject like the mountain on the top right should be completely included or completely excluded. As is it leads the eye to the edge of the photo which is not ideal. Objects that are framing or reaching into the frame are some exceptions. I like how the rock in the right bottom reaches in towards the scene and frames it. However, the rocks next to it, as john points out above should be included in their entirety or cropped with a purpose. I do think all in all it its a beautiful image with a very peaceful mood.

Here’s a suggestion. Don’t try to use the roots as a lead into a grand landscape. Rather make it about the roots and use the landscape to complement it in form and color. Here’s an example I just saw this morning from an O’Keefe painting. 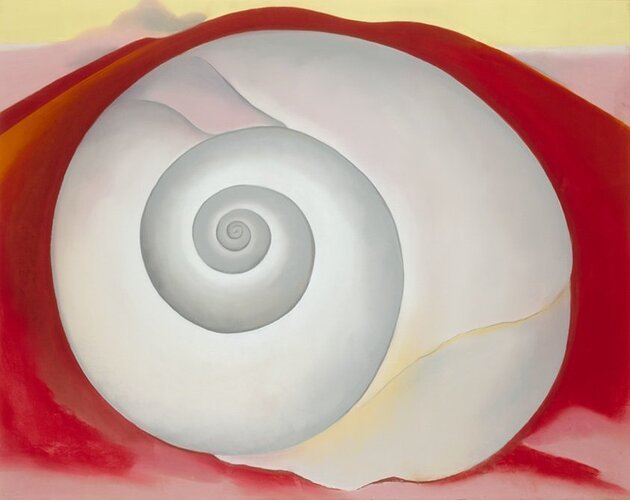 In my opinion there is too much going on in the image. Simplify and make your point more clearly.

Thank you guys so much. That really helps. I tend to get excited and put to much into a picture and need to learn to simplify. Following your feedback I am attaching two possible crops to the picture (of course in the future I hope I can do this process in the field

Please tell me if these work better. Thanks. 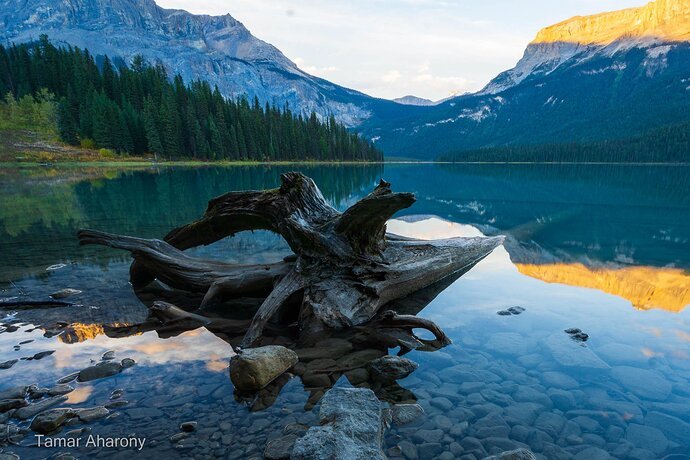 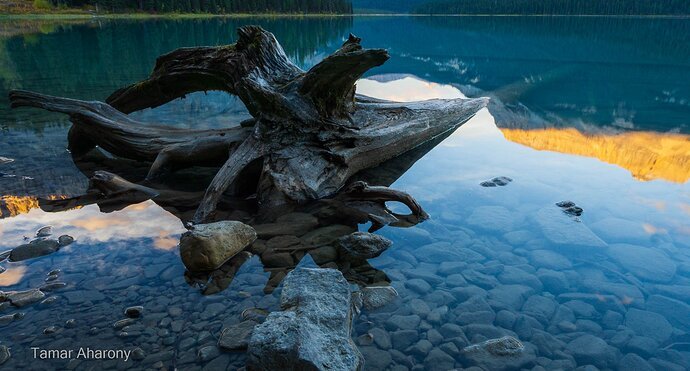 Great view. I think that second is more balanced of this three. The lower one is a bit cramped and has no actual object on display. Maybe a slightly higher camera position could do good. When photographing, you always twig for more opportunities

I prefer the second one as well. Nicely done.

I also like the second image the most as it best balances the tree with its surroundings (the lake and the mountains). The addition of the foreground rocks in the first image confuse things, because to me that image, as is, is about the tree and those rocks but then there’s that cut off mountain in the background. It has some great light and I want to see more of it but because it’s cut off like that in the composition I’m being told “don’t look at that, that’s not important. Look at these pretty rocks and this tree”.

Anyway, that’s just how I see things. Others might see it differently.

Also, I just wanted to add something from my own experience about simplification in general. I’m a big fan of simple images and I’ve tried in the past to really simplify scenes to the extent that there was just one element in the picture. After a while I realised that these images were often too boring and I discovered that rather than have just one element in the image it’s sometimes better to have two elements and to show the interaction between them. For example, a really simple image with one element would be a picture of ice on a frozen lake with some wonderful cracks and bubbles. A similar simple image but with two elements would be for example the same image of the ice but with maybe a golden single fallen leaf on it. You’d then have the interaction between the cool colours of the ice and the warm colours of the single leaf.

Anyway, that’s also just how I see things and others again might see it differently.

First of all, it looks like you just recently joined NPN - so I wanted to welcome you aboard!

You’ve got some good feedback and I’m a little late to the party, but thought I would give my .02.

I think by simply mentioning “foreground,” by definition one would think of a “near/far” landscape composition - which means that the background is either just as important as the foreground, or certainly connected or complimentary to the foreground. And so for this reason, the 2nd post works much better compositionaly - although the bg mountains are still cut off, as others have mentioned.

Looks to me that the log is indeed a fascinating element. It’s hard to see, but what interests me with this old weathered log is how the tree extends in to the depths - you can see this under water beyond the main stump. Obviously you’re not going to have a ladder… but even getting your camera as high as possible for a different point of view might emphasize this log and all it has to tell, better. Of course, easy to say as the back seat driver…

But to this point, it appears the angle of view is pretty low and so only the immediate facing features of the log are shown, but not it’s “presence” if that makes sense.

Guess I could summarize this. When there’s a great foreground element, you basically have 2 options. 1. Incorporate as an actual foreground element with a wide angle and include the entire scene, mountains and all (including the glorious late light…) OR 2. focus on the log as the primary subject and not just a foreground element. Hope that makes sense.

Look forward to more posts and your participation here on NPN!