Norma Rae’s husband wants just a plain housewife and mom, not an activist. Frustrated with his constant pressure she slams the iron on the ironing board and gives this great quote. Surprisingly, it’s the only thing I remember from this Oscar winner.

How does it relate to my image. Well, there have been comments made that I do so many small scene compositions.

I have to say that I just got lucky with this image. Wondering along the Baja desert I squeezed between some elevated boulders and saw this below. The light was perfect. All I had to do was squeeze the trigger. The image is pretty much the way it came out of the camera. Very little had to be done except for the sky which had little color. And that’s the problem. It’s so straightforward by modern standards. No mist. No dramatic tones. No Orton effects. I feel as though some processing should be done for it to be more arresting but nothing comes to mind. I like it the way it is. Perhaps I just lack an imagination. 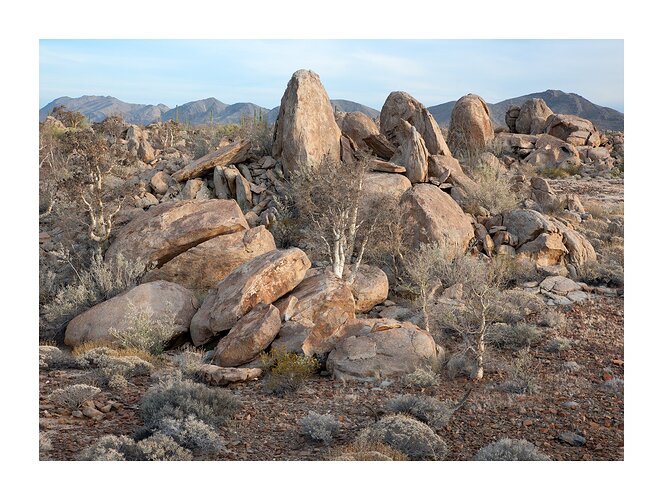 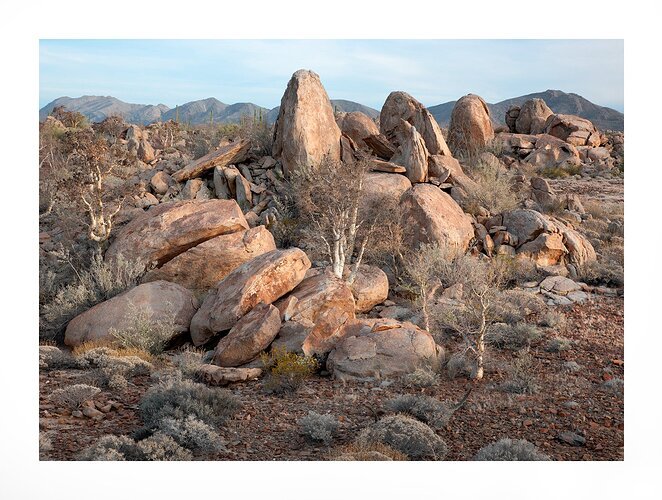 My rework. Any better? 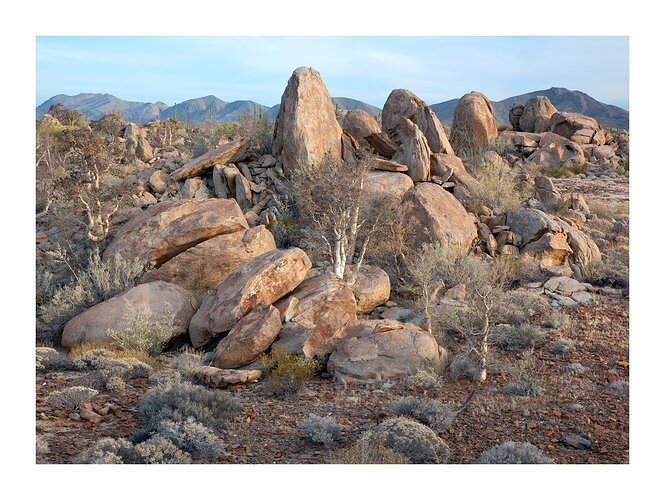 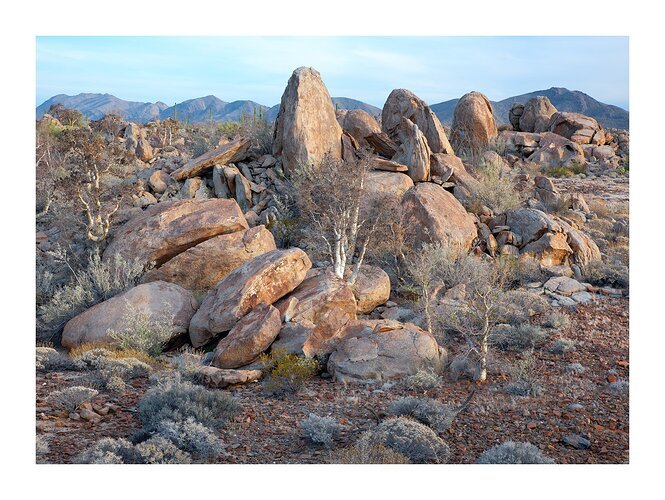 Looks really good, Igor. The composition is busy, but there’s lots of interesting stuff. Good eye to frame this complex scene so well. My only thought would be maybe to do some burning and dodging as a way to move the viewer through the image a bit more as opposed to the very even light you have here.

Apologies if you see this twice.]

This is certainly another great small scene. The light is so subtle and beautiful, you wouldn’t want to do much otherwise it would ruin the gentle ambience. I could see, as Tony suggested, some subtle dodging of highlights to guide the viewers eye. You have that line of interesting trees and flat boulders that angle up towards the left and the line of upright boulders that generally angle up towards the right. Accentuating highlights on these two lines would give this a bit more structure.

Here’s what I’m thinking (if you’re getting tired of my editing your photos, just let me know). I did it in PS, with two layers and some dodging. First, an exposure layer that lowered exposure about 1/3 stop, then brushing off the areas of highlights. Lowering the exposure made it more saturated than your original, so I added a hue/sat layer to desaturate the parts that were adjusted in the exposure layer. Then a bit of dodging of the highlighted areas.

Thank you for posting this rework. I will repost this at the top with the original. I probably should give this more time before commenting but I prefer the original in this case. The reason being that I don’t really don’t want to deemphasize really any part of the image. I want the viewer to look at the bushes on the bottom. I like the boulders on the left and want the user to look at those with the same interest as the highlighted ones.

I often have a hard time with busy images in that I don’t find them busy. Or rather, I welcome their busyness. I like having the eye wander all over the image. At least, I like to see images like that.

I can see adding a bit more contrast to the original as you have done. I think I tried it originally and decided I preferred the more original gentle nature because that’s how the evening light came across - not flat and not harsh.

I could be wrong. That’s my first impression. Probably should wait.

Very beautiful rocks! Those sandwich-like boulders do ask for highlighting. I find partial rock in foreground a little distracting

I like @Bonnie_Lampley 's Rework maybe warm the rocks a touch and crop just below the centre right boulder, I’m not into your foreground scrub, sorry

The more contrasty difference from the foreground shadows to the highlights on the boulders work for me in the rework. The tonal difference suits the comp for me

Here’s my rework. The mountains seem a little too blue to me. I applied LAB colors globally then backed off in a few places. See above for comparison. Did I make the tree too white?

Igor, I like your rework, adding more blue to the sky helps. Before reading your narrative on this, I just assumed this was another shot in your recent series from the Alabama Hills. So I find it interesting that you are attracted to such a similar landscape that is hundreds of miles away. As I would expect from you, the composition is complex, but works pretty well, with the key elements well balanced.

And that’s the problem. It’s so straightforward by modern standards. No mist. No dramatic tones. No Orton effects. I feel as though some processing should be done for it to be more arresting but nothing comes to mind.

The image conveys a sense of place, and the light is nice. But by today’s “rainbows and unicorns” standards, it does not have tremendous impact. I think we have become so accustomed to seeing grand landscapes in the context of dramatic light/clouds/weather, that some viewers compare this image to the standard of other “rainbow and unicorn” images.

But if this scene were to be presented as an intimate rather than a grand landscape, the expectation of having "rainbows and unicorns " disappears. In an intimate scene, lines, shapes, textures and colors become what’s important (not light and weather). And I think that significantly changes our perception of how much impact it has. 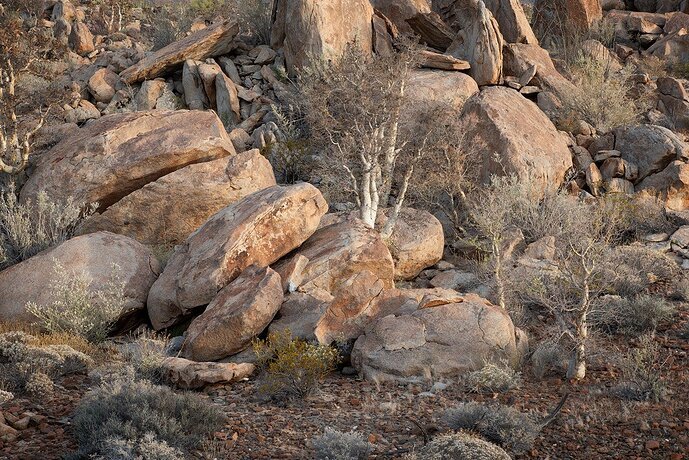 Thank you for your comments, Ed. I thought I took that shot as well although I cannot seem to find it any longer. I can absolutely see the reason for this composition as it seems to be the heart of the matter. However, For some reason I really like That open area in the right bottom area of the original. I also feel that the tall spire is important in full view and when you cut it off it feels cut off. So those are my two main issues. The first can be ignored I suppose but the 2nd I can’t get around satisfactorily. Thank you for the suggestion. I will see what others think (if there are further comments).

BTW. I was blown away at the richness of compositions at the Alabama Hills. Baja is much harder to shoot. For one thing the visual quality of the rocks are not as good. But where Baja excels is in the diversity of desert plants which can add a lot.

BTW. I was blown away at the richness of compositions at the Alabama Hills. Baja is much harder to shoot. For one thing the visual quality of the rocks are not as good. But where Baja excels is in the diversity of desert plants which can add a lot.

To someone living in the Northeast, the Alabama Hills and Baja look more similar, and so different from the environment that I normally shoot in at home.

I prefer the rendition posted at the bottom of your original post. You’ve pulled out just enough color/contrast in the sky to really add to the overall scene.

Just love everything about this. The rocks of course place this in the AH’s - but I think the trees could put this elsewhere - the plains of Africa or perhaps the Australian outback. But that doesn’t matter of course - their presence - and the vegetation at the bottom really finish this one off.

No nits from me.

I don’t usually chime in on landscapes, Igor, but somehow the title caught my attention and the relatively active commentary was interesting. For my taste, your original post is spot on. All the other variations try to lead my eye through the image, and that’s exactly what the do-lead it right through, all done, what’s next? Your original post still has the directional elements, but they’re not so strong as to force the viewer’s eye. They give one the latitude to linger and explore ,which is exactly what I do when I view this image.

Coming in a little late on the image and comments. But I was very attracted to your image, Igor. I think you have placed an impressive “intimate” scene within the context of a grand landscape. Bonnie’s rework is nice but I very much like the dusty/smoky pastel colors found in the stones and vegetation. The composition is very strong and has a great depth. Lots of places to stop and rest in the scene and look around. The desert floor “openness” along the right side is an important element and supports those bonsai trees scattered throughout, as well as provides breathing room for the many stone tableaux in the image. My original thought while previewing the image was that the trees could be a little whiter and your rework hits the target. While I usually admire Ed M’s. reworks and commentary, for me this time, he misses the mark (perhaps a parochial New England bias from wandering through woodlands as opposed to hiking through desert dust and stoneworks). His rework smothers the grandeur and largess of the scene. No unicorns or rainbows needed for an impactful desert image. Maybe just clip out the cacti in the left center horizon and this is a wall hanger of the first order.

A fine scene Igor that many would not see. Thanks for bringing us to it and it to us.
You were concerned about the sky. I curved down the light ends and warmed the image temp, and i sorta like the details that came out in the sky. Sky might take further temp change but i could notdo that on my tablet w/ Snapseed 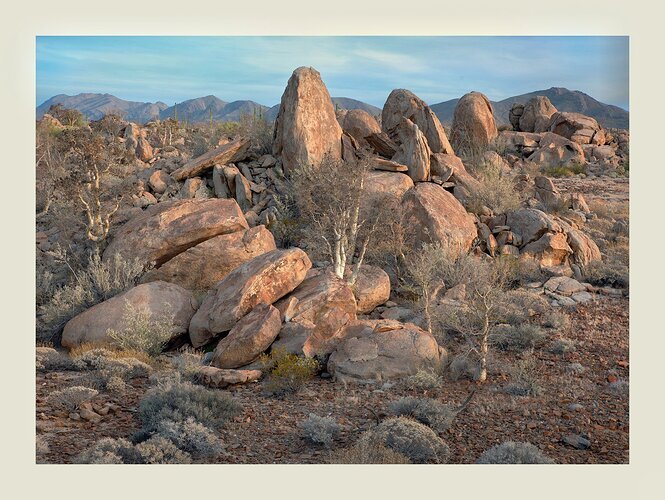 Congratulations on the Weekly EP Igor.

Apparently, mist, rainbows and Orton Effect are not always required…

Thank you for your comments. I’ve made a cooler version of this image. I think it has a greater range of colors. It’s not clear to me whether this is better or not. 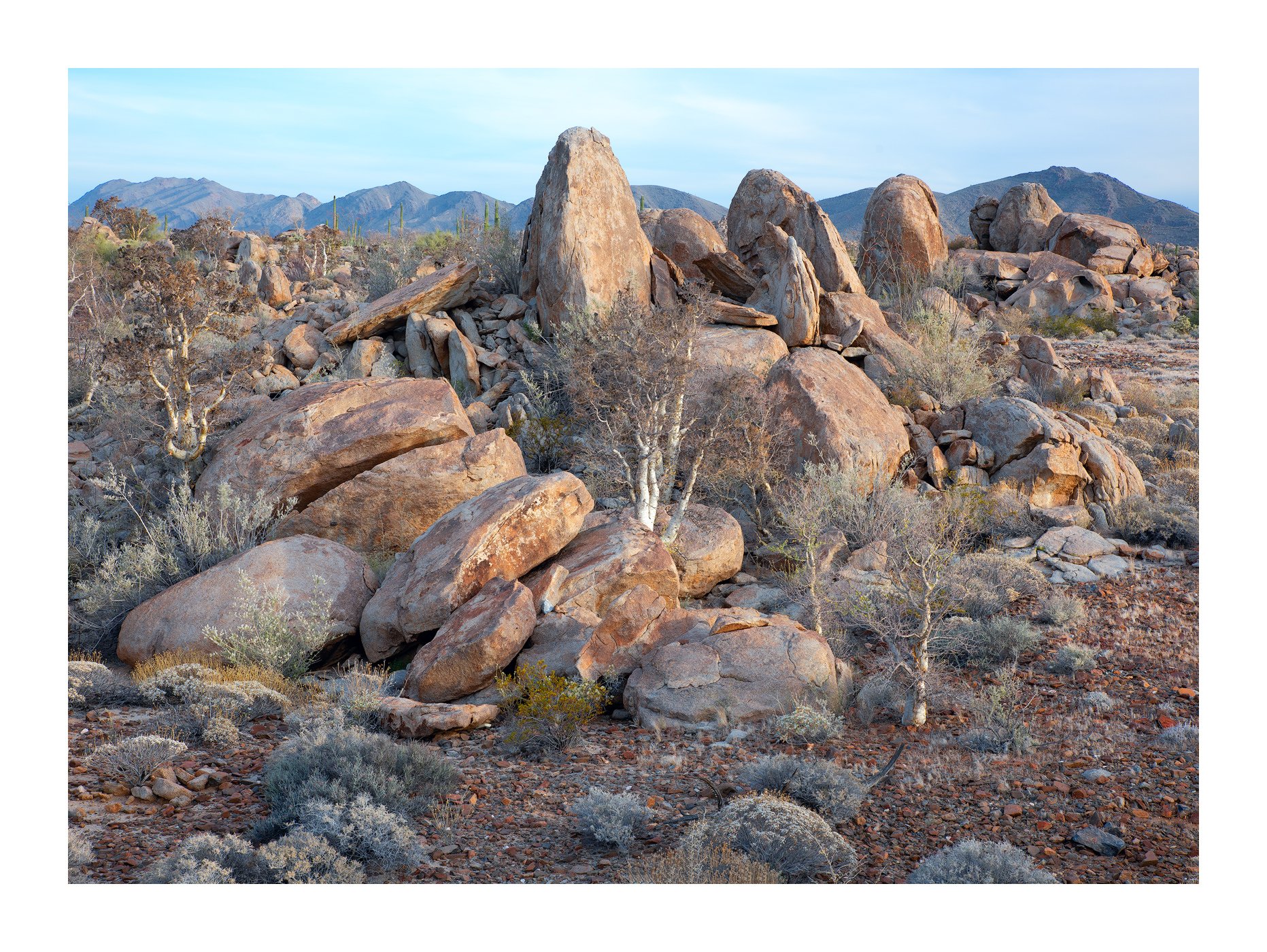 The cooler version has more depth to me.

Tough to keep track of all the various processes. All are very fine, which speaks to the strength of the original image and its composition. We all the have our subjective bias and are drawn to specific tones/colors contrasts, etc. For my eyes it is awfully difficult to beat the original or your first redo. The more that is done the further away the image seems to get from the dusty smoky grays that originally drew me and held me to the image. The sage or ground vegetation seem to have too much the blue look for me in the last one. There is a deeper tone on the rocks but I don’t think it improves the image (doesn’t hurt it either). Lovely light on everything. What time of day did you shoot?