A Day at the Beach + Rework

Don’t know if you would call this a grand landscape but it does include some sky. This image was made just prior to the tide pool shots I posted here. I chose to go with a cool white balance because of the mood this contained. The tide had just receded at this point and the rocks glistened with wetness. The sand is coarse at this beach and that added quite a bit to the composition. I went as wide as my zoom lens would allow.

Is this a special image? Sometimes I think so and sometimes I don’t. What do you think? 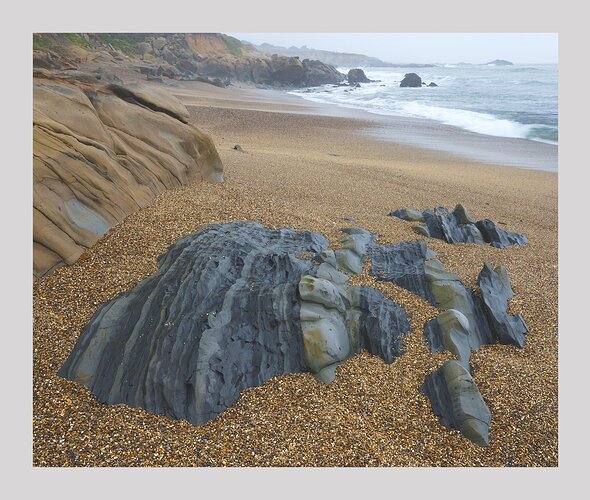 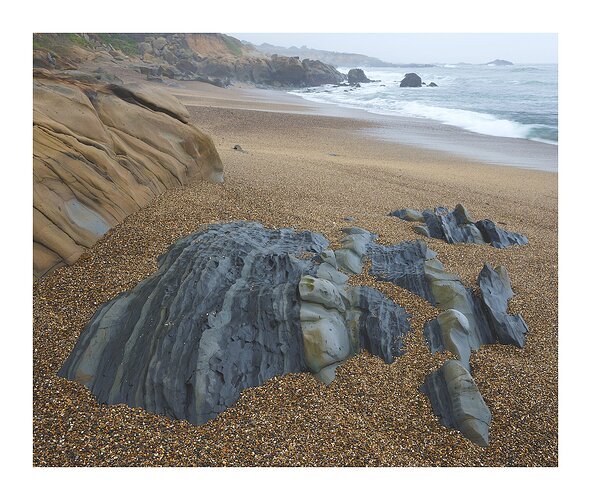 Egor, I really like this very much. For me it almost looks like the remains of a buried shipwreck. With the bottom of the hull to the left and the rest of the broken ship scattered remains to the right. I’m sure it would not give the same impression without the differences in various rock blends.
No changes for me at all as including the rest of the backdrop area enhances my thoughts on the FG structure.
Very nice indeed…

This image tells a powerful story. Geological time is always so unrelatable to humans because our time is so short. Looking at those layers, formed in an unimaginable time, then turned on their sides and revealed by the push/pull of the ocean is remarkable. I’d have been tempted to isolate them more, but by including the source of that scouring action, it portrays the perpetrator and the result. The sand does as well. All rock becomes sand eventually and I love that contrast here as well. Really special. One could make a case for adding some contrast and reducing the blue in the foreground rock, but I’d leave the haze in the distance.

…here. I chose to go with a cool white balance because of the mood this contained. The tide had just receded at this point and the rocks glistened with wetness. The sand is coarse at this beach and that added quite a bit to the composition. I went as wide as my zoom lens would allow.Is this a special image? Sometimes I think so and sometimes I don’t. What do you think?GFX50R 32-64 @32mm, tripod, etc.

Igor, I think this this is really nice and I’m quite enjoying the look / feel it has. The soft misty background works so well here for me.

Very, very nice Igor. Well balanced with color and weight. Love the blue orange interchange as they are complimentary colors. I like where you framed the top edge of the composition. Any more height and weight on the ULC would disrupt the balance of this and there is just enough sky. I would reduce the sharpening just a little bit in the midground pebbles as they appear slightly too sharp compared to the background misty/hazy/softness. I do think this is a special image because of it’s uniqueness. Not only is it unique for a beach scene, but the rocky outcropping color variation, sand/pebble coarseness, and geological story it tells is something I have never seen in a beach scene before.

I have often found images with a parallel view of the shore to be more challenging than with a perpendicular view. Your image does a bang up job of that by creating a flow from the lower left to the shore in the upper right. I think the fact that you included only a small amount of ocean works surprisingly well; its an intriguing mix of being the focus of the lines in the foreground, and yet playing more of a supporting role.

I like this Igor. Great textures and color and great lines in the rock. The fade to the distance enhances the feeling of the background only providing a supporting role. Works for me.

I’m not usually a fan of big rocks in the foreground of photos with more landscape in the distance, but the striations in the rock pointing the way forward to the rest of the photo work perfectly and it ends up being a great composition. At fist I thought the light was too subdued, but after looking at it for awhile, it grew on me. It is very evocative. With more “pop” it probably would be less evocative. So, thumbs up as is.

Tony. I initially wanted to make an image of just the rock and sand. Somehow I couldn’t come up with a composition I liked. So I looked up and saw this combination. I moved the frame to various positions and decided to use a background. The blue rock still occupies most of the space but now the foggy cliffs add a different feeling to it. I probably should have come back the next day and worked the comp over some more. Oh, I remember. The forecast was for a sunny day and I knew I wouldn’t see this scene again. It started to drizzle an hour after this picture was taken.

I like where you framed the top edge of the composition. Any more height and weight on the ULC would disrupt the balance of this and there is just enough sky

Good observation. The image as shot had the sky going completely across. I decided to cut into the cliff to make the sea an important but secondary feature. The rock and sand had to be the main feature. This really isn’t the classic fg to bg David Muench comp.

I reworked the image this morning. I thought the sand was unnecessarily dark giving it a ponderous look. What do you think of the change?

the rework brings out the color in the sand a little more and I think that’s a good thing. To me personally, the composition is good. I really like the striation in the rock and I like the background that the foreground points to. One thing that I would try to address is the yellow big stripe of the rock in the FG. I feel that it is somewhat an eye magnet that prevents me from going into the BG.

Another lovely image and your voice is becoming increasingly evident in terms of composition (what draws your eye) and your choices around colour tone and balance. I much prefer your rework - it just creates more contrast and texture giving the image a little more pop while still keeping it fairly subtle. Very nice, Igor

The revised version is much nicer IMHO; really makes it pop much more. Wonderful composition too, but your compositions are always superior. The only change I don’t care for is the way the border was brought from white to grayish. I like the way the white contrasts better.

The only change I don’t care for is the way the border was brought from white to grayish.

You’re right. I got lazy. Actually a lighter grey would be my preference.