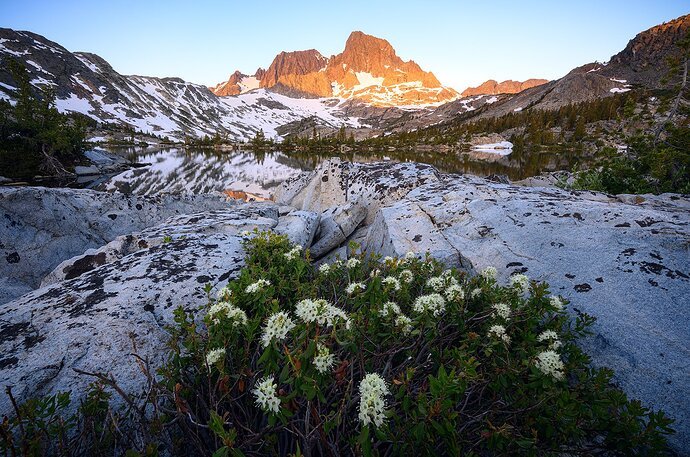 I’m always on the search for wildflowers in the High Sierra, but they can be pretty small and sparse, particularly in alpine basins such as here. So when my friend and I stumbled across this scene, I felt like it worth taking the time to do a focus stack and attempt to capture the scene.

(If this is a composite, etc. please be honest with your techniques to help others learn)
This is a 5 shot focus stack of the scene blended to achieve focus from front to back. All shots were taken at 16.5mm and f/11.

At first glance I thought you may have received a dusting of snow over night. But opening up the large view I see you just have a nice field of granite (and the color is rendered quite nicely.)

Great job with both the composition and the stack. A beautifully crafted, captured and presented high alpine landscape. The reflection in the lake is a nice bonus - it kinda sneaks in there as it doesn’t pop out at you at first glance.

The only small nit would the small bit of peak reflecting at the lakes edge left of center. Not an image killer by any means, but a slight eye magnet.

Lovely image from the Sierra! The focus stack worked well–nice detail and sharpness. There is a tone merger between the foreground granite and the reflection. You might consider burning the reflection down some. There is a piece of brush in the lower left corner that grabs my eye for some reason.

The early light is very nice, and you handled the dynamic range quite well. Good job!
-P

PS: This region of the Sierra is one of my favorite places in the world. I have hiked and climbed there since the mid-1960’s.

I have a soft spot for Banner Peak and boy this is such a lovely image, Luiz. Composition is top notch. I do agree with Preston about the tone merging between the granite in the FG and the reflection. His suggestion is a very good one. Definitely a wall hanger.

Beautiful scene, the focus-stack works great and all looks nice and sharp. I’ve become fond of vertical compositions and I think this would work great as a vertical as well. Putting the flowers at the lower edge of a wide angle can nicely exaggerate their size. I agree with Lon about the reflection, I think I would’ve liked to see the nicely lit mountain top(s) either not reflected, or more of it. But with small wildflowers like these you might need some perspective blending? My small nit would otherwise be the tree on the edge to the right, maybe cropping it out cleans the edge up a bit.
Beautiful scene, love the snow that’s still there in August (!)!

I have a soft spot for Banner Peak

So do I, @Adhika_Lie. I climbed it from Lake Ediza long ago. We were sitting on the summit, and heard an increasing whine coming from the direction of the Minarets. A few seconds later two Lockheed F-104’s flew directly below us. They were probably hitting close to 400 mph. The noise of those afterburners was astounding! (I was a fighter mechanic in USAF, and had been out of the service less than a year)

We had planned to also climb Mt Ritter, but there was a lot of rockfall happening on the route, so we bailed.

Thanks to @Luiz_A_Arroyo for his nice image that brought back some great memories!
-P

Wow, @Preston_Birdwell! As an avgeek, that is an airplane that I would love to see in person myself.

Real nice capture of the high country. I have spent time in this location and I appreciate a fine flashback to this beautiful piece of country. BTW, I like @Preston_Birdwell 's suggestion for the reflection.

Thanks a lot for the feedback! I didn’t see the reflection issue at first, but I can see it now that you and @Adhika_Lie mentioned it. I’ll be sure to darken it down a bit. I’ll take a look at that brush on the lower left too. It probably shouldn’t be too hard to clone out some of those branches.

And what a crazy story about those fighter jets! I would be so scared! I would be scared enough just climbing Banner, I wouldn’t need jets buzzing by to freak me out even more! Ha!

Thanks a lot for the notes. I agree about the vertical comp. When I posted this image to IG, I posted it with both the normal horizontal crop and then as a square crop. Once I saw how this scene looked as a square crop, I realized that it probably would have worked well if not better as a vertical composition.

So if I could do it over, I definitely would have shot it as a vertical comp in addition to horizontal. (In general, I have been telling myself I shoot too many horizontals, and I need to do a better job of keeping my eyes out for verticals.) Oh well, it just gives me another reason to go back there in the future!

What a fabulous scene. Great job seeing its potential! I like this as presented, but I’m wondering if the bright reflection is a distraction or could have been a key part of the composition. While the flowers are lovely, and the focus stacking wonderfully done, I feel pulled vertically but without any real resolution on where to rest my eyes. Part of me really wants to explore the reflection more. Part of me is lost in the rock and flowers.

A vertical composition might help that work better, but I’m also think (sorry, I often do) that there are several compositions here: reflection and mountain with a little fg rock from a higher perspective to get the tip of the mountain; a lower perspective to provide flower, rock, mountain as the subject with no reflection; and even a rock/flower only comp. Sometimes simplification can really raise a composition to another level.

It might be interesting to share other images taken here (if you did other comps rather than just the focus bracketing) in a new thread. I’m hoping (for my sake

I shoot too many verticals myself, so I keep telling myself to compose horizontally too.

But sometimes I see the vertical composition coming together in front of me, then it’s silly to start working horizontally too. I mostly have time to post-process one of them anyway.