Dolly Sods, West Virginia. I generally only shoot here for sunrise but I visited late afternoon last fall to scout locations. The blueberry bushes were beautiful and the clouds in the sky added to the scene for me. I rarely find clear water in the rocks like I did that day.

I processed this as a 3 shot HDR in LR. I have just started trying this and I like it better than some plugins I used for HDR in the past. Looked better than a single image processed the exact same way to me. Rarely do I like the HDR look but it seemed to work here.

Comments and critiques please. I feel I left enough sky to make it interesting and the mountains on the upper left corner add to the feeling of the area on the top of the mountain. 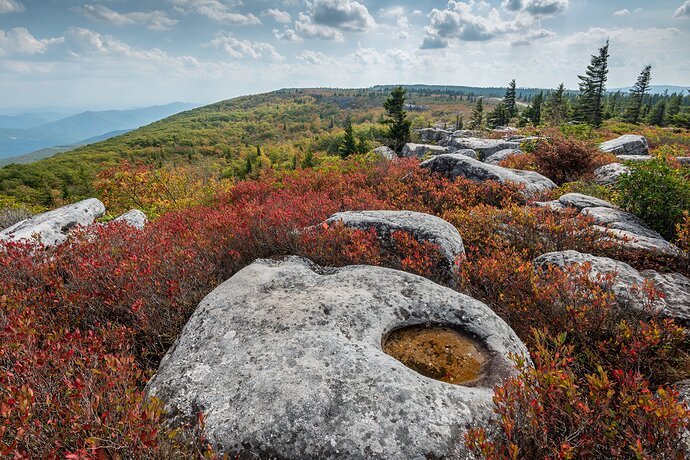 Nice image with beautiful colors! Maybe the clouds would have been better if not cut, with a little more space for the sky…

Interesting composition here for me with the shape of the rocks and the colour of the bushes.

I would be inclined to lower the highlights in the sky a touch but I also think that’s a personal preference.

I find the composition quite interesting but I find the light a little bit unflattering here, Andrew. But I think you can highlight the foreground rock a little more by a slight crop from the right, maybe almost to the second tree from the right. That will clean up some of your right edge, too.

Excellent job on the HDR processing to my eye…it looks like accurately presented as a bright partly cloudy day My only compositional “wish” would be to move the camera more to the right include more of the rocks from the right side of the image as it looks like a good visual path into the distance, or I could imagine walking along those rocks towards the distant mountains.

Hi @Andrew_Sentipal, very good shot. Lights and shadows well balanced with HDR processing. Did you try an other composition? Just a little bit to the right? Thanks for sharing.

Well done Andrew. The processing is quite excellent and you’ve done well given the time of day and lighting. The composition is quite good as well and yes, just enough sky - maybe a skosh more if you have it, but not a big deal at all. Including the distant mountains has also given this some depth.

This looks just like I would think it would had I been standing there.

The water on top of the rock is definitely an eyecatcher, as is the wide lookout! The warm reds in the fg surrounding the rocks is a nice start of the composition.
I agree with what others said about just a tad more sky if you have it, I also agree with @Nathan_Klein about the brightness of the sky. Some burning, or maybe midtone adjustments? could increase the depth of the scene I think.
Your file lets me zoom in quite a bit and I notice some strange blending artifacts in the trees to the right and on the land/sky transition. This might be a processing error, or something that LR just struggles with? Or maybe due to wind and movement between shots? Blending it manually in PS will most likely avoid this, but it of course is much more work.
There is a dust spot just off centre to the left, in the sky.
I would take the liberty to clone out the 3 cars (I mean they could as well not have been there at the time you took the images right?

) , or the whole road if you want to take it that far.

Interesting circle within circle within circle composition. This has a feeling as though you’re on top of the world. I really like the marbled texture of that large rock. Some of those trees have a pretty extreme tilt to them. I’m wondering if that’s due to lens distortion.

our file lets me zoom in quite a bit and I notice some strange blending artifacts in the trees to the right and on the land/sky transition. This might be a processing error, or something that LR just struggles with? Or maybe due to wind and movement between shots? Blending it manually in PS will most likely avoid this, but it of course is much more work.

Andrew, I noticed the same thing that @Ron_Jansen mentions. It may be wind, but it may also be due to the level of de-ghosting that you use in Lightroom’s HDR function. When I tried working with LR HDR, I often found, and had a hard time removing, artifacts in things like moving water or vegetation. I eventually gave up on LR HDR and moved on to using manual blending with. luminosity masks. As Ron mentioned this takes more time and effort but you have way more control over how the blend is done, and IMO you end up with a much higher quality blend.

I like the composition, the arrangement of rocks is very interesting, and as others have mentioned it helps add to the “top of the world” feeling. On my monitor the overall luminosity looks a bit too bright, in both the land and sky. If you don’t mind, I did a rework where I decreased the luminosity overall, but then went back in and increased the luminosity of the lighter tones in the landscape (but not the sky). 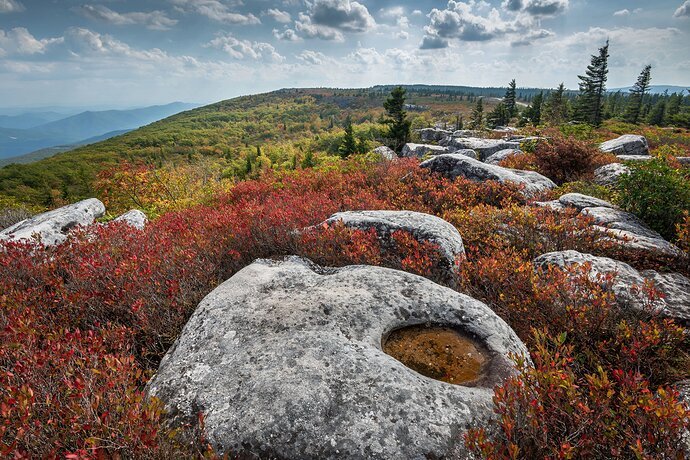 Ed, thanks for the rework. I really learn from every post I make and note the comments left to help me in the future.

For those that have not visited Dolly Sods it is so high the weather mimics Canada. The growth on the trees is one sided due to the winds that seem to always be there.

I composed as I did to take advantage of the three groups of rocks with the most interesting one front and center.

This was a tripod shot so it was level. I use a leveling base and the in camera level to get my images 100% straight in most landscapes I shoot.

Thanks to all for your input