From planning, finally getting the right conditions to capture it, and editing, this shot is about 4 years in the making. For those who aren’t familiar with the area, this is a famous view looking down Franconia Ridge, one of the most popular hikes in New England (and for very good reason–the views are pretty incredible). After 3 years of waiting for good conditions to sync up with my weekend schedules, I hiked up the ridge at sunset and waited until the Milky Way was in position before capturing a series of exposures for the whole scene. The lights to the bottom right are from the Lincoln, NH area and other towns south of the White Mountains. The clouds weren’t in the forecast and moved in about 15 minutes before the Milky Way was in position. I’m not sure that I love them, but they did make blending the sky and foreground exposures a heck of a lot easier, so there’s that.

Given how long I’ve had this photo in my head, I want to make it as perfect as possible, so any and all feedback is welcome. The things that I’ve been nitpicking the most are foreground brightness (which I always obsess about in a nightscape shot, and how the eye travels through the scene. I tried to dodge the trail traveling along the ridge and the brightest part of the core of the Milky Way to give a path for the eye that generally travels from bottom-right and up through the center of the frame to the top.

This is comprised of 17 total exposures:

-10 for the sky at ISO 12,800 which were processed with basic edits in Lightroom, exported to TIFF files, and stacked using Sequator to reduce noise (Sequator wasn’t recognizing the edits in the .NEF files, hence the reason for exporting.)

-5 base images for the foreground taken at f/4 ISO 3200 for a few minutes, which I made basic edits on in Lightroom before bringing them into PS so that I could stack them and reduce noise.
-2 additional darker foreground images at lower exposure to control the blown out light pollution areas. 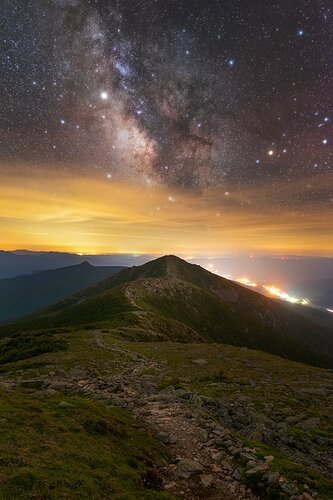 I like this a lot. I only took my first milky way image a few weeks ago.

I find it easier to edit and re-post than write a lot. The super bright, golden sky dominates the middle of the image and draws attention away from the milky way which is the intended subject. 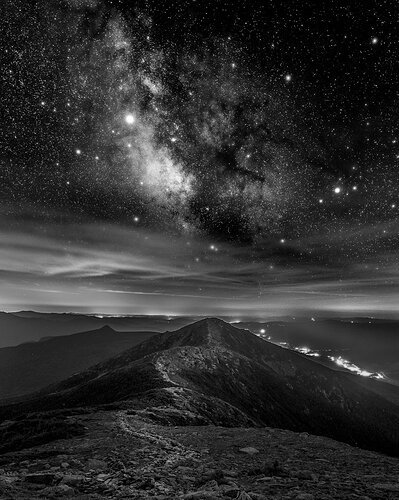 FranconiaRidgeMW_WDraft2-11443×1804 1.71 MB
I first converted to B&W and then cropped some foreground. I lowered the black globally and noticed there were blacks in the foreground and not in the sky. Outer space is black, so I added a gradient filter and lowered the blacks until the sky had some blacks in it. I also added clarity globally and locally. I dodged the path leading out to the summit since it points to the milky way. I burned down the golden sky and lights quite a bit. 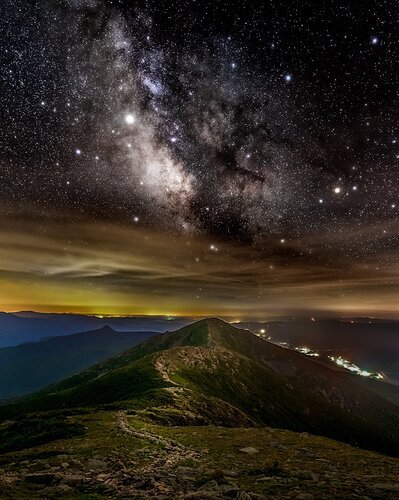 FranconiaRidgeMW_WDraft2-1-21443×1804 2.29 MB
I then converted back to color. I lowered saturation of the golden sky with a brush and reduced the orange and yellow saturation globally. I increased green saturation and moved the green hue more green. I upped the purple and lowered the magenta. I changed the blue and aqua hues to be a little more blue.

There are some hot pixels (green and red) in the foreground you may want to clone out.

That’s my take on it.

Love the shot. Question: did you blow up the galactic core part? It seems really big compared to the worldly environment. Just curious.

Nice image Kevin, the effort and patience was worth it! Overall you did a great job with processing, I just have a few ideas and you can take them or them leave them

I felt the foreground was too warm and doesn’t feel like night, in my opinion the foreground should have a slight blue cast. I also burned the clouds and city lights as they were demanding all the attention, I also had to bring down the saturation of the clouds after burning. There was also a red cast in the sky that I selected and desaturated. Another note; there is a lot of hot pixels in the foreground that you will want to clone out. Let me know if I can elaborate on anything! 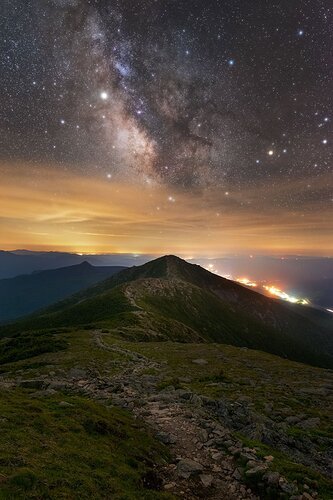 @David_Kingham @Dave_Douglass @bradley Thanks very much for the thoughts guys. I think collectively you touched on all of the things I had been mulling over, particularly the cloud/light pollution brightness and color cast on the foreground.

David, pretty much hit the nail on the head in terms of the revisions I was considering. Much appreciated. Any thoughts on the crop? I’m torn because I want to show as much of the path leading down the ridge as possible, but, as Bradley hinted to, it does put the horizon right in the middle of the frame. I think I’m leaning towards keeping it as is, but I dont think Im settled yet.

And Dave, to answer your question, no changes to the core of the Milky Way. This was its size in the frame at what I think was around 18mm on a full frame (on my phone right now and cant remember exactly what focal length I shot it at.

I’d consider cropping some off the top, which would actually make it more centered, but I just feel the empty sky on top isn’t adding a lot to the scene and it feels more balanced imho.

@David_Kingham Actually I think that works well. The horizon is still in the center, put it also puts a curve of the ridge and the division between the clouds and the sky on the lower and upper thirds, respectively. Thanks for the help! Really happy with how this one turned out.

And @Dave_Douglass, I went back and checked the RAWs. This was actually at 24mm, not 18mm like I guessed. 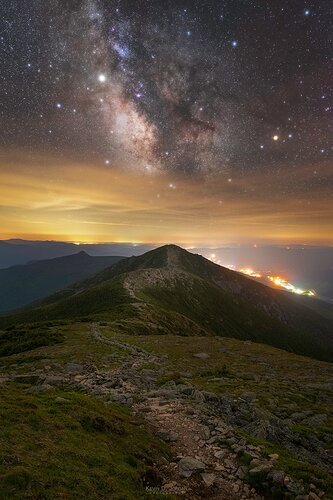