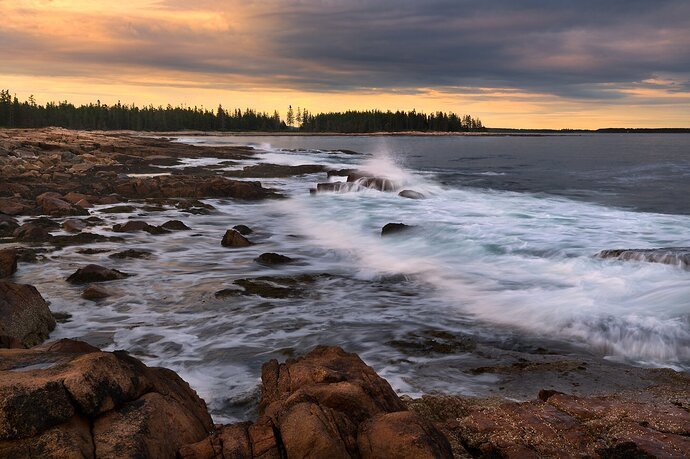 Odd…I just wrote a big long post about this image and when I hit continue, it was all gone, only to be replaced with text from 2 posts ago, hopefully that doesn’t happen again. Sorry, the writing probably won’t be as good this time!

This image was taken a while after the first one I posted from my trip to Acadia. I had plans to be in a different location not too far away for sunset, but there was a change in plans as when I arrived the path I intended to take had been closed by the NPS, I assume to poor visitor behavior.
One of my favorite parts of that trip was really being able to slow down and just linger at a location for a while. Another highlight was talking to the people hanging out on the rocks for sunset, I had a few who wanted to talk about the camera I had or what I was taking pictures of. One even asked for a few tips as he was shooting in manual and wanted to try some different things out during the trip.

Learned a lesson shooting this, I shouldn’t say I learned it…I knew it, but I made sure my camera was square based on the in camera level…well, that isn’t necessary level with the horizon! Because of this, I had to do some rotation that ended up with me losing some of the foreground rocks and more of the rocks on the left side. If the eye follows the water and the rocks act as a buffer, it’s probably ok. If you follow the rocks around, then there is a bit of a break about 1/3 up the left side that could be problematic. Im hoping the eye follows the water! Interested if that is bothersome or if it works ok.

Second, the processing. I’ve been thinking a lot about how I want to process these images. Generally speaking, I think I’m happy being a bit more aggressive with my editing on sunrise/sunset images. I want to feel that wow factor that you often get when on location. I want to emphasize that with out over doing it into the realm of unbelievable or tacky. So, did I cross the line? Could I push it further? This is one of those things that I really want to improve long term is my ability to find where the line is and then stop. Sometimes I get to editing and I think it looks good, somebody steps in with a few pointers and I realize “crap, I went way too far” OR “I should have really kept going.”

Is this a composite: Yes
I blended parts of two waves to provide a more pleasing/complete flow to the water.

This is a really nice image. The fg rocks have a nice glow to them which adds substantially to the image. They are not filler elements that frame a subject but a part of the subject. The white foam looks and more importantly feels like white foam. The sky is wonderful. The sunlit area below the clouds comes across as genuinely. And those two pine trees in the gap are wonderful. I don’t think it’s as good as your recent dark image because it’s a fairly common composition . I personally like the brightness of the surf.

Very nice, David. The processing looks great to me. I think you could take the colors a little further, but I don’t think you need to. This is great as is. The framing works just fine. The break in the rocks that you mention doesn’t bother me at all.
I could see just a little burning of the brightest areas of the sky below the clouds, and in the upper left, but that’s really minor.

Odd…I just wrote a big long post about this image and when I hit continue, it was all gone, only to be replaced with text from 2 posts ago

Hi David, the same happened to me but I think it had to do with the updates they were doing,it kept uploading an old picture as well. So I just gave up for a couple days. It seems good now. I love your photo and I would say my eyes follow both the rocks and the water and it doesn’t look like anything is missing. It’s beautiful light and I love the distant trees as well! Beautiful composition!

@Igor_Doncov Thank you! It’s funny, those trees immediately caught my eye as I was setting up here, at first it was bout the rocks and the water, then I saw the pair of trees and felt like it took it up a level. I have a few more images from here with a longer lens just picking out more of those trees in the distance.

@Craig_Moreau Thank you for checking it out, I appreciate the feedback. I have added that suggestion and did some slight burning up in the top left.

A gorgeous seascape David, very nice image. And these are the type of clouds and light that can make stormy days interesting to shoot, even if there are no red/purple clouds filling the sky at sunset. Everything about this image is dynamic, the storm light, the wave action (perfect shutter speed and luminosity/processing), and the way the spray from the wave hitting the rock goes into the air. And then you get to those two trees. I wouldn’t change this at all, I love it as presented. I would not recommend pushing the processing any further. This image alone makes your trip worthwhile IMO.

Is this near Ship Harbor or Seawall?

David, I’m just setting back and enjoying the large version of this image and it makes me wish I was standing there. Very nice composition and I like the wave splash, and yes, the distant two pine trees add a wonderful touch.

…is dynamic, the storm light, the wave action (perfect shutter speed and luminosity/processing), and the way the spray from the wave hitting the rock goes into the air. And then you get to those two trees. I wouldn’t change this at all, I love it as presented. I would not recommend pushing the processing any further. This image alone makes your trip worthwhile IMO.Is this near Ship Harbor or Seawall?

Wow, thank you @Ed_McGuirk, appreciate it for sure! You nailed it…if you take the Ship Harbor trail to the rocky shore and follow that to the N / NW, that is where I was posted up the first night shooting across toward the Wonderland Trail area.

@Nick_Bristol some images look great both large and small, but I agree, I think this one looks best when blown up. I may have to make a print of this one!