The eclipse had reached totality before the moon rose over Emigrant Peak. With a 500 mm lens on a full frame camera, it looks like you need an exposure of less than 1 sec to prevent streaking of the stars and the moon. While I would prefer sharper details in the moon, this is a full frame look at 2.5 s. 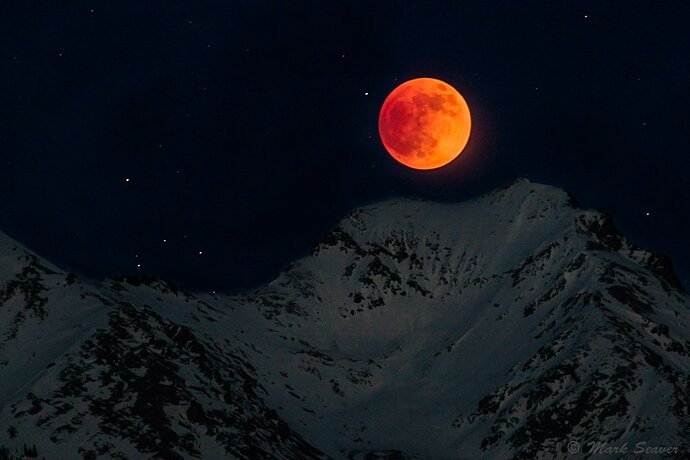 How cool is that shot!!!

Outstanding capture, Mark. Composition and details look great to me. I’d definitely hang this one!

Wow Mark! This must have been something to watch. I can only imagine being there - the cool, crisp night air, crystal clear skies… waiting, and waiting after the sun goes down, waiting in anticipation of the rise of the eclipsed moon. Very cool!

But alas, I wasn’t there. And I didn’t even get to watch in my own backyard and previous references I had were thru hazy skies, so take this with a grain of salt… Is the moon just a tad bright? Again you were there, not me… I think the night mountain landscape and the stars are spot on. Color seems right for a blood moon, but this seems even a bit brighter than what full moon might even be - without the shadow. again, take with a grain of salt. Kudos on capturing this and thanks for sharing!

Lon, even at totality, the moon is not uniformly lit. This view has the brighter (lower right) edge burned in. It was nearly blown. The fully eclipsed moon is still notably brighter than most of the stars and much brighter than the land, as you see here. Remember that the full moon has the brightness of midday light (directly reflected sunlight…the old f/16 and 1/film speed rule), so getting a balance in brightness between moon and land is the luck of timing. In this case sunset was about 45 minutes earlier so there was still just a touch of twilight brightness, which is what lets the mountain show.

A very cool image. Great scenery to see an eclipsed moon rising and you did a great job to capture it.
I share the feeling of @Lon_Overacker that the moon is a bit bright, but as he said: you were there. The image is beautiful anyway, thanks for sharing.
The eclipse was very early in the morning in my region. I am not an early riser, so fortunately the forecast was a cloudy sky

…The eclipse had reached totality before the moon rose over Emigrant Peak. With a 500 mm lens on a full frame camera, it looks like you need an exposure of less than 1 sec to prevent streaking of the stars and the moon. While I would prefer sharper details in the moon, this is a full frame look at 2.5 s.

It’s refreshing to see a single exposure of this event. I like it. It feels realistic and the moon is nicely placed.

Very nice, with excellent placement against the FG!!

I do feel the moon is a bit bright compared to the landscape, but if you want the same exposure for both, the lighting ratio is determined for you. I have settled on 600mm at f/4 for lunar eclipses, and planned to start at 0.25 sec. and ISO 6400, and review the magnified image to see if I can go to a longer exposure at lower ISO. Didn’t get to test it due to lingering clouds in the wrong place.

Amazing image Mark. Not having tried astro photography, I don’t have any technical input.

This is as nice a photo of the Eclipse as I have seen… Congrats, Excellent.

But how did you manage to keep the moon from streaking while the stars did streak? I know the Sidereal rate is 15.041 arcseconds/second and the lunar rate is a bit slower at 14.685 arcseconds/seconds, but at a 2.5 second exposure, the stars would have moved 37.6 arcseconds, but not knowing your camera, I am not sure how much of a streak the stars would have made, i.e. how many pixels they would have covered. The Moon in a 2.5 second exposure should have moved 36.7 arcseconds, which is 1.9% of the Moon’s width, which when a crescent is pretty visible. Just wondering.

Youssef, I don’t know the details about the moon’s movement vs stars, “I just took the picture”. As I look at higher magnifications, I see noticeable softening in the moon’s features due to motion blur. These are somewhat disguised at NPN viewing sizes an likely small enough to be tolerated. This is why I said in my original post that with a full frame camera, it looks like a less that 1 s (and maybe less than 0.5 s exposure is needed to “freeze” the moon. (Since I don’t do a lot of night sky photos, I’m not about to spend the money and climb the learning curve of a clock drive.

Very late on this but I have to say that I really like this a lot Mark. I love the foreground of the snow capped mountains in stark contrast to the brightly lit, blood orange moon and just a few stars. As for the brightness of the moon, it’s your image to paint how you feel and I just have to say that I love it.

Very cool image, Mark. I agree with others that this is certainly different and very original with respect to eclipse photos. What was your ISO?

ISO 6400, with a bit more noise reduction in LR than usual.